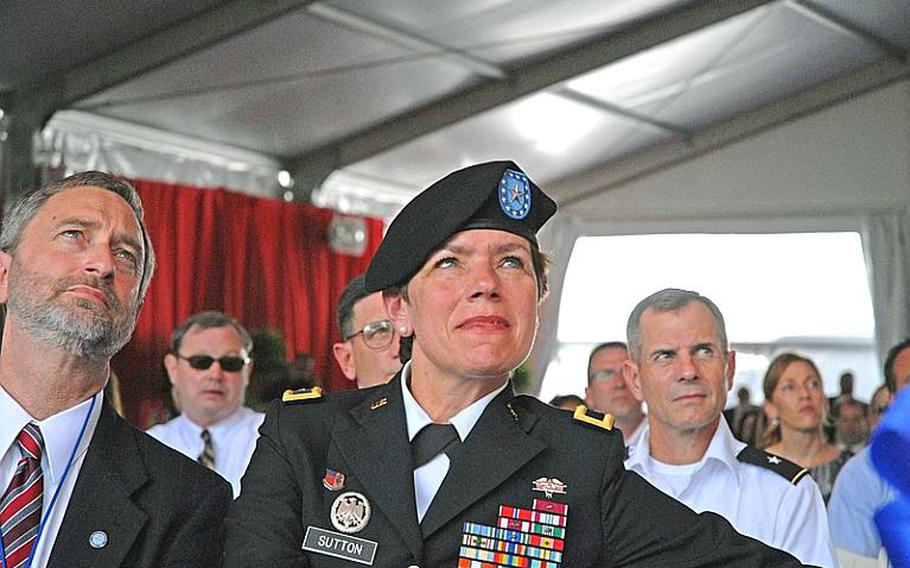 Buy Photo
Brig. Gen. Loree Sutton, who abruptly stepped down as director of the Defense Centers of Excellence amid controversy over struggling efforts to diagnose and treat traumatic brain injury and post-traumatic stress disorder, listens to the dedication ceremony of a new privately-built center for TBI and PTSD. (Megan McCloskey/Stars and Stripes)

Buy Photo
Brig. Gen. Loree Sutton, who abruptly stepped down as director of the Defense Centers of Excellence amid controversy over struggling efforts to diagnose and treat traumatic brain injury and post-traumatic stress disorder, listens to the dedication ceremony of a new privately-built center for TBI and PTSD. (Megan McCloskey/Stars and Stripes) 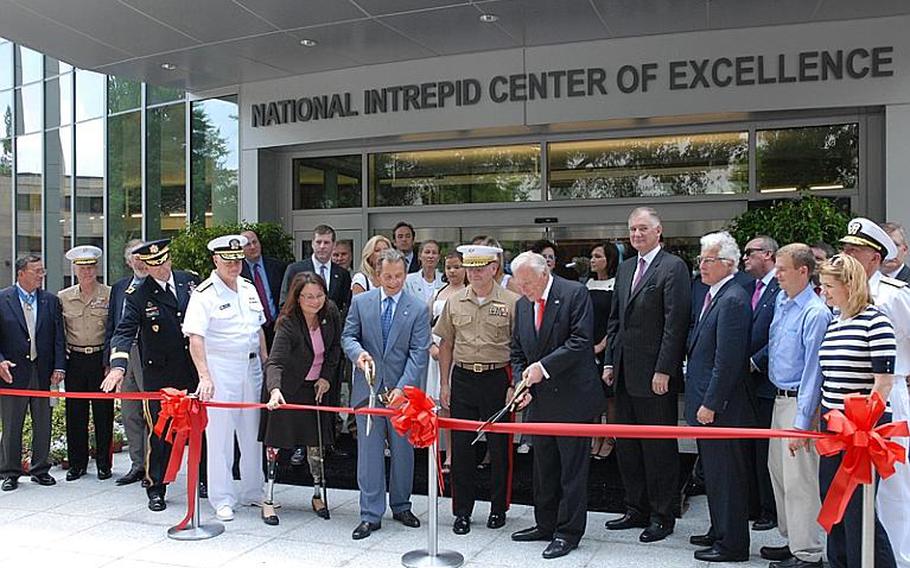 Buy Photo
Arnold Fisher, right, the honorary chairman of the Intrepid Heroes Fund, cuts the ribbon at the grand opening Thursday of the National Intrepid Center of Excellence on the campus of the National Naval Medical Center in Bethesda. The Center will provide treatment for severe cases of traumatic brain injury and post-traumatic stress disorder. (Megan McCloskey/Stars and Stripes) Buy Photo
The United States Marine Drum and Bugle Corps plays at the dedication ceremony Thursday of the National Intrepid Center of Excellence. The $65-million, state-of-the-art facility at the Naval Medical Center in Bethesda, Md., will be a treatment center for traumatic brain injury and post-traumatic stress disorder. (Megan McCloskey/Stars and Stripes)

BETHESDA, Md. &mdash; A premier brain injury and traumatic stress treatment center opened Thursday amid news that the head of the military&rsquo;s oft-criticized mental health efforts had abruptly stepped down.

Brig. Gen. Loree Sutton resigned earlier this week as the director of the Defense Center of Excellence for Psychological Health and Traumatic Brain Injury. Sutton had often taken heat over charges that the military wasn&rsquo;t doing enough to diagnosis and treat traumatic brain injury and post-traumatic stress disorder.

That criticism led to the new National Intrepid Center of Excellence on the campus of the National Naval Medical Center in Bethesda, which was built entirely by private initiative.

The entryway to the state-of-the art facility bears the inscription: &ldquo;A Place to Heal the Invisible Wounds of War. From the American People and the Intrepid Fallen Heroes Fund.&rdquo;

Arnold Fisher, honorary chairman of the fund and the force behind the center&rsquo;s conception, said he was fed up with seeing the military put a Band-Aid on servicemembers with the signature wounds of the Iraq and Afghanistan wars and send them out to fend for themselves.

The $65 million to build the center came from 125,000 Americans, including donations as small as $10. The project broke ground in December 2008. When the Intrepid fund was in danger of missing its fundraising mark this spring, Bob Barker of &ldquo;The Price is Right&rdquo; fame stepped in and donated $3 million.

The ribbon-cutting ceremony Thursday officially transferred control and operation of the 72,000-square-foot facility to the Defense Department. Sutton was in the audience rather than behind the podium as originally planned, but was thanked for her contributions in getting the Intrepid Center off the ground.

She was instrumental in creating the Defense Centers of Excellence -- the heart of the military&rsquo;s efforts to address psychological and brain injury-related diagnostics, treatment, prevention and research -- and has held the top job ever since.Her departure comes after legislators recently questioned her ability to follow through on that mission, according to a report on the ProPublica website.

At an April hearing of a House Armed Services subcommittee, Rep. Susan Davis, D-Calif., said that the center had failed to carry out its role.

&ldquo;The Defense Center of Excellence, while having achieved some notable small scale successes, has not inspired great confidence or enthusiasm thus far. ... The center has also made some serious management missteps that call into question its ability to properly administer such a large and important function.&rdquo;

Col. Robert Saum has taken over as director of the Defense Center for Excellence, and Sutton has moved to the Army Surgeon General&rsquo;s office. Her new role is unclear; Sutton declined to comment.

Since 2000, more than 150,000 servicemembers were diagnosed with TBI, and experts believe thousands more with mild symptoms go undiagnosed. Post-traumatic stress disorder affects about 30 percent of returning servicemembers, according to a study last year by RAND.

At the facility, servicemembers with severe PTSD or TBI &mdash; or, likely, both &mdash; will receive a two-week evaluation and receive a treatment plan created by an interdisciplinary team of neurologists, psychologists, family therapists and others to take back to their home base, according to Thomas DeGraba, the deputy director of the center.

The facility will be the nerve center of high-tech innovations, spanning from virtual reality therapy for PTSD to electronic brain scans that can view activity &ldquo;right down to the individual fiber tracks&rdquo; of the brain, DeGraba said.

Clinicians at bases without the resources to handle severe cases will be able to refer those servicemembers to the Intrepid Center. In an effort to include families in the healing process, there will be a family therapist at the center and two Fisher Houses, which provide accommodations for family members.

Bases around the services vary drastically in the quality of care they are able to provide for TBI and PTSD, and troops often find themselves referred outside the military for care. Wounded servicemembers at the dedication told similar tales of having to fight through a lengthy progress for treatment.

Tech. Sgt. David Romanowsky couldn&rsquo;t find the help he needed for PTSD at Buckley Air Force Base, where he was stationed. His wife had to search for a place for him to get care.

Capt. Adrian Veseth-Nelson, who has TBI and PTSD, has been stationed at three stations in the 2&frac12; years since his diagnosis. When he left Fort Drum, where soldiers are often deployed and the signature wounds are familiar to the medical staff there, his next base lacked the expertise to treat him.

He said he was grateful that part of the center&rsquo;s mission was to disseminate information across the services, so each base &ldquo;doesn&rsquo;t have to reinvent the wheel.&rdquo;

Fisher said he hopes the center&rsquo;s research arm will make discoveries about the brain as significant as when Walter Reed identified yellow fever.

Marine Staff Sgt. Hector Medina, who has PTSD, said he was looking to the center to make these invisible wounds more visible to commanders, so they &ldquo;know it&rsquo;s real.&rdquo;&ldquo;I really hope from the bottom of my heart,&rdquo; he said, &ldquo;that this is the start of something bigger.&rdquo;