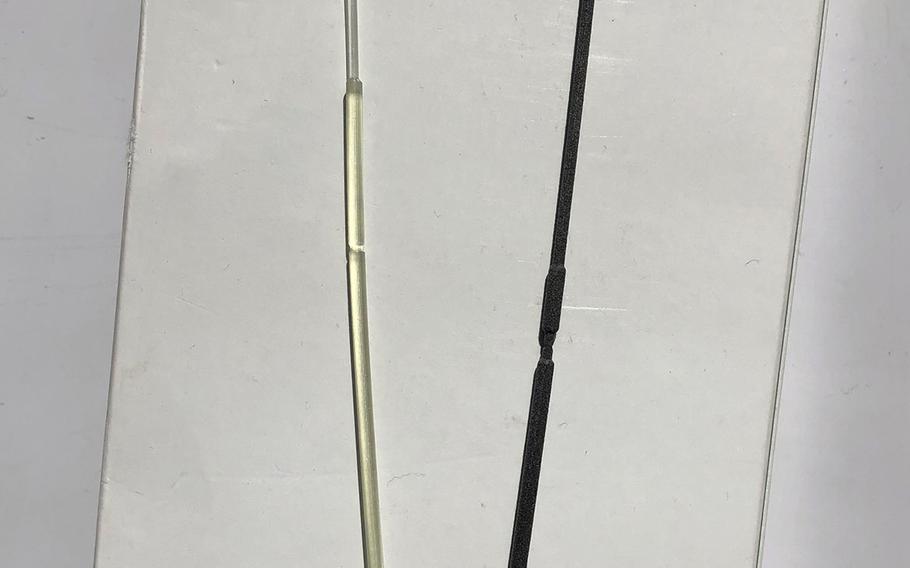 The Army Medical and Research Development Command has worked with 3D printed nasal swabs designed by two different companies. The white swab on the left, designed by FormLabs, is made with surgical-grade resin and is being printed at two military facilities. The gray swab, designed by HP Inc., is made with polyamide 11 and is awaiting approval to distribute. (Edward Brown/U.S. Army)

The Army Medical and Research Development Command has worked with 3D printed nasal swabs designed by two different companies. The white swab on the left, designed by FormLabs, is made with surgical-grade resin and is being printed at two military facilities. The gray swab, designed by HP Inc., is made with polyamide 11 and is awaiting approval to distribute. (Edward Brown/U.S. Army) 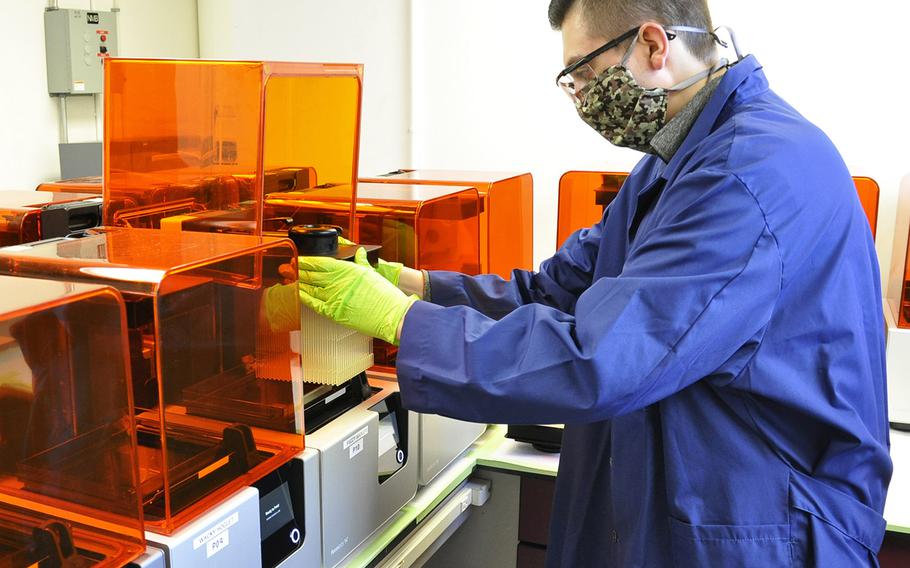 A facility at Portsmouth Naval Shipyard in Kittery, Maine, received enforcement discretion from the Food and Drug Administration, which allows it to use 3D printers to make nasal swabs for coronavirus testing. The facility can make about 12,000 swabs a day, which are used at base medical facilities. (Jim Cleveland/U.S. Navy) Portsmouth Naval Shipyard in Kittery, Maine, outfitted several of the 3D printers to use surgical grade resin to create nasal swabs for coronavirus tests. The site can make about 12,000 swabs a day, which are used at base medical facilities. (Jim Cleveland/U.S. Navy)

Inspired to find a solution to the coronavirus-related supply shortages throughout the United States in the early months of the pandemic, the Army Medical Research and Development Command began to determine in March what it would take to produce some of their own medical supplies and personal protective equipment.

The swabs were the first success of the initiative, clearing government approval in June at sites with 3D printers at Portsmouth Naval Shipyard in Maine and Lackland Air Force Base in Texas. Five more bases are working toward approval and distribution.

“What the Army realized was that in order to control the supply chain, you need to become the supply chain,” said Edward Brown, a biomedical engineer with the Army Medical Research and Development Command who serves as the product manager for the swabs.

As efforts began in March, the command, based at Fort Detrick, Md., coordinated with locations across the Defense Department that manufacture parts for the Army to create nasal swabs. However, most of them have more experience making parts for tanks or weaponry and not medical supplies.

Three months later, the first site at the Portsmouth shipyard received clearance from the Food and Drug Administration to begin printing swabs to be used at base medical facilities.

“It’s really to shore up the local testing,” Brown said.

About the size of a coffee stirrer, the swabs are made of surgical grade resin with a textured collection surface at one end that meets FDA standards to collect the appropriate amount of cells needed to conduct a coronavirus test.

Each print creates about 300 swabs and takes about 12 to 16 hours to complete. In total, the shipyard is generating about 12,000 swabs a day.

A dental lab at Lackland was the second site to get approval and begin printing. With only about two printers available, it can make about 300 swabs a day, and the contribution has been crucial to a base that conducts a lot of training, Brown said.

Lackland is home to Air Force basic training and has welcomed between 460 and 640 new recruits nearly every week since March, according to the 2nd Air Force, which oversees all service training. All recruits are tested when they arrive for training and then again after two weeks of restricted movement.

Both sites received approval from the FDA through a process known as enforcement discretion, which will only allow the military to print and use the swabs during the coronavirus pandemic. The Coast Guard Academy in Connecticut and dental labs at Fort Polk, La., and Fort Gordon, Ga., are ready to begin printing as soon as they receive similar FDA clearance.

The 3D printed swabs cost about $2 each, while those commercially available are about $1 to $1.50 per swab. It’s more about ensuring supply, not saving money, Brown said.

“It’s really fulfilling the needs that they have,” he said. “For the Lackland site, it’s pretty significant. They have a lot of people coming through for initial entry testing.”

The success of the program, he said, could be used to demonstrate how to support troops when the supply chain to a future battlefield is compromised.

“We’re really thinking this 3D printing concept might be an early proof of concept for what we could do going into future conflicts to really make sure we have all the appropriate medical equipment at the right point for the right provider at the right time,” Brown said.

The medical research command is still working to 3D print N95 respirator masks to supply military medical personnel. Any printed masks must pass testing from the National Institute for Occupational Safety and Health.

“We have a few candidates showing some promise,” Brown said.

Work continues on a second swab printing design that can generate about 1,770 swabs made of a nylon material in about six to eight hours, Brown said. The Army’s Rock Island Arsenal, Ill., and the Navy’s Fleet Readiness Center Southeast in Florida are the two main sites helping with that design.

“If that one got online, it could support a much wider range of testing without draining the commercial market,” he said.

His team has already begun coordinating with the Defense Logistics Agency to get the swabs into their distribution chains that support clinics throughout the Defense Department once they are available. Similar coordination is underway for the Portsmouth shipyard.