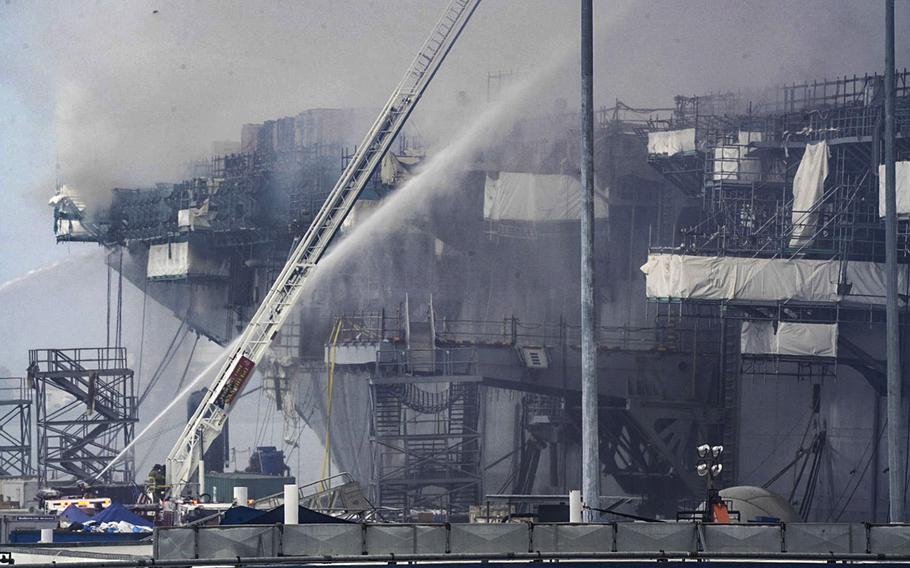 In a Monday morning, July 13, 2020 photo, under a cloud of smoke the fire continues to burn aboard Bonhomme Richard at San Diego Naval Base. (Nelvin C. Cepeda, San Diego Union-Tribune/TNS)

WASHINGTON — Thirty-eight sailors have now been injured fighting the fire aboard the USS Bonhomme Richard as crews have managed to stop flames from reaching the ship’s fuel supply, Navy officials said Tuesday.

Rear Adm. Philip Sobeck, the commander of Expeditionary Strike Group 3, which includes the Bonhomme Richard, said 38 sailors and 23 civilians had been treated for minor injuries, and no personnel were in the hospital now. Originally 17 sailors had been hospitalized Sunday due to minor injuries such as heat exhaustion and smoke inhalation from the fire aboard the amphibious assault ship. The five sailors who had remained hospitalized into Monday for observation have been released.

Yet, more than 48 hours after the fire started, firefighters were still combating two fires on different ends of the ship, Sobeck said.

“There is no threat to the fuel tanks, which is well below any active fires or heat sources. The ship is stable, and the structure is safe,” he said.

Overnight, helicopters with water baskets from Helicopter Sea Combat Squadron 3 continued to drop water on the fire. By Tuesday, they had dropped more than 1,000 water buckets, which have kept the ship cool so that firefighters can work aboard the vessel, Sobeck said.

The cause of the fire is still unknown, but Navy officials believe the fire started in the cargo hold where supplies were being stored as the ship underwent maintenance at Naval Base San Diego. The fire was first reported at about 8:30 a.m. Sunday and about 160 sailors were on board at the time.

It's still too early to tell the extent of the damage within the ship, Sobeck said Tuesday. The Navy has been able to investigate the four main engineering spaces and found no major damage, he said.

The commander said firefighters were not able to use the aqueous film-forming foam system aboard the Bonhomme Richard on Sunday to help fight the fire because, just as the system was being activated, there was an explosion, forcing personnel to evacuate. The system uses foam to rapidly extinguish fires, according to the U.S. Naval Research Laboratory.

Sobeck had said Monday that one of the ship’s fire suppression systems was not operational at the time of the fire because it was being worked on in the shipyard.

“For the last 24 hours, 400 sailors have been on board that ship to make sure that we make every effort to save that ship,” he said.

The fire has moved throughout the ship and has caused damage to its superstructure that sits on top of the ship and where the bridge is located. The amount of water that has been used to fight the fire also has caused it to list, Sobeck said.

Firefighters encountered a lot of debris that has fallen as they combat the fire, such as scaffolding from the maintenance work, according to Sobeck. They must move compartment to compartment, assessing each one’s stability, and temperatures are ranging as high as 1,000 degrees, he said.