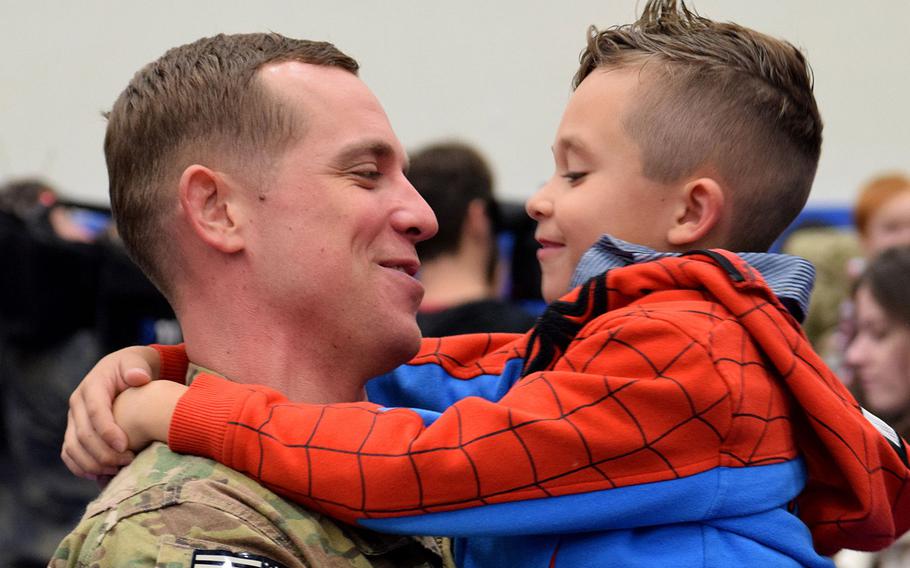 Staff Sgt. Gilbert Cunningham reunites with his 6-year-old son, Paxtyn, at Joint Base Elmendorf-Richardson, Alaska, in November 2014 after he and fellow soldiers from the 23rd Sapper Company and 17th Combat Sustainment Support Battalion returned from Afghanistan. Two companies of the 2nd Engineer Brigade at Joint Base Elmendorf-Richardson will be inactivated Friday. (United States Army Alaska)

Two companies of the 2nd Engineer Brigade at Joint Base Elmendorf-Richardson in Alaska will be inactivated during a combined ceremony at the base Friday.

The 23rd Engineer Company (Sapper) (Airborne), and the Headquarters and Headquarters Company, U.S. Army Alaska Provisional Engineer Battalion are slated for inactivation, according to an Army statement.

During the Global War on Terrorism, the 23rd Engineer Company deployed to both Iraq and Afghanistan to perform route-clearance operations and protect allied forces from roadside bombs. Most recently, the company returned last November from a five-month deployment to Afghanistan.

This will be the fourth time the 23rd Engineer Company has inactivated since World War II. The company served in the Pacific Theater during World War II with campaign credit for both Leyte and Luzon in the Philippines.

The company has been involved in a number of important construction projects at its Alaska home, including building the Otter Lake Lodge in 1974 and reconstructing the lodge after fire destroyed it in 1982.