California shootings shared an oddity: Both suspects were senior citizens 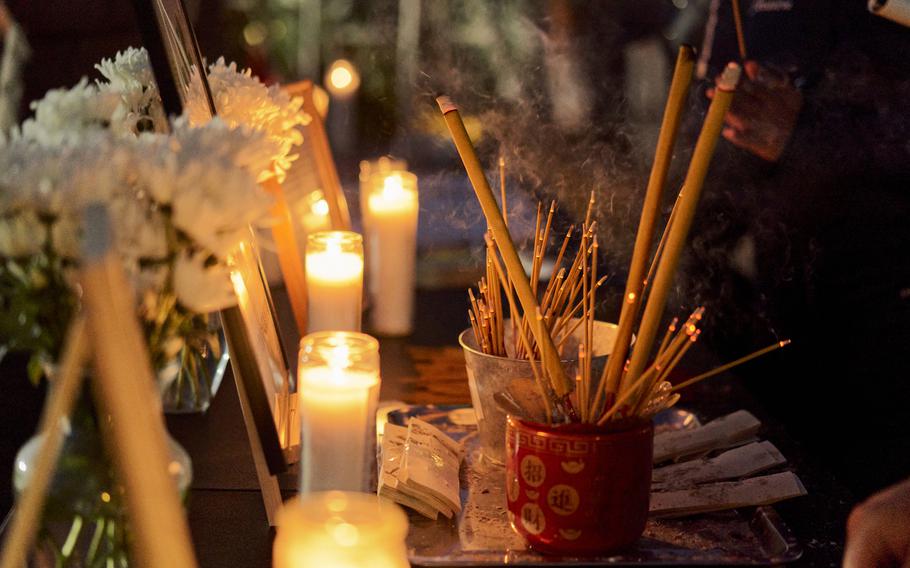 A memorial is held at Monterey Park City Hall in Monterey Park, Calif., on Jan. 24, 2023, to honor the victims of a Jan. 21 gun attack at a dance studio in the city. (Philip Cheung/The Washington Post)

The gunman who killed 11 people in Monterey Park, Calif., on Saturday and the man suspected of killing seven people in the Half Moon Bay area on Monday are among the oldest suspected mass shooters in U.S. history.

Huu Can Tran, the Monterey Park gunman, was 72. Zhao Chunli, who was charged with seven counts of murder in Monday’s deadly shooting, is 66.

Those ages make the two men extreme outliers, said Jaclyn Schildkraut, interim executive director of the Regional Gun Violence Research Consortium at the Rockefeller Institute of Government. “In general, elder individuals are more likely to become the victims of crime than to become the perpetrators of crime.”

That was the case in both of the California shootings as well. In Monterey Park, the victims — who had gathered to celebrate the Lunar New Year at a popular dance studio — were in their 50s, 60s and 70s. After shooting them, police said, Tran traveled to another dance studio before an employee there wrested away his gun. He fled, sparking a manhunt that ended the following day, police said, when he shot and killed himself as officers approached his van.

Two days later, authorities say, Zhao killed four people at a farm business where he had been a longtime employee, then killed three more people at a nearby farm. The victims’s ages ranged from 43 to 74.

A database of mass killings from 2006 to 2023 maintained by the Associated Press, USA Today and Northeastern University shows that about only 7 percent of shooters are over the age of 50, while more than 20 percent of victims are 50 or older. The average age of a shooter was 32.7, according to a Washington Post data analysis, and nearly half of them were under 30. Mass killers motivated by workplace grievances, as authorities allege Zhao had, skew significantly older than any other type, with such assailants’ average age over 44.

The data tracks all killings of four or more people regardless of location, means or motive; The Post limited its analysis to the 420 incidents since the start of 2006 that involved shootings.

The ages of the past week’s suspected shooters are striking, “because we don’t see violence in older people,” said Yeates Conwell, a professor of psychiatry at the University of Rochester School of Medicine. “The research is clear that older people tend in general to be more satisfied with their lives than younger or middle-aged people. They tend to be more reflective, more accepting, more able to process [adversity] because they’ve had a lot of experience.”

Tran is the oldest recorded person accused of carrying out a mass shooting at a public venue in U.S. history, and he is the second septuagenarian in about four decades to carry out such a massacre, according to the Violence Project, a nonprofit organization that studies firearm-related bloodshed. Its database tracks shootings with four or more fatalities that occur in public places.

In Tran’s case, details have emerged that suggest a history of grievances against others.

Tran’s home, around 80 miles east of Monterey Park, in the town of Hemet, Calif., was part of a mobile home park that bills itself as being for people ages 55 and older; a neighbor there described him as a “recluse.”

But Tran, who was born in Vietnam and became a U.S. citizen in 1990, was said to be a regular at the two dance studios he targeted. Adam Hood, a former tenant who lived on Tran’s property for years, said that Tran’s only apparent hobby was dancing and that the two venues were “the only place he would go at night.” Tran had complained for years about employees and patrons there, though, saying they were not friendly with him, and he also nursed grievances about his ex-wife and financial difficulties, Hood said.

Zhao had been living on the premises of the 150-acre mushroom and herb farm where he worked, said David Oates, a spokesman for the business’s owners. Some of its 35 employees lived there in trailers and mobile homes, Oates said, and there had been no official complaints about Zhao.

But court records show Zhao was the subject of a temporary restraining order in 2013, when a former roommate and co-worker at a restaurant accused him of attempting to suffocate him with a pillow and threatening to kill him, the San Francisco Chronicle reported.

According to the Violence Project’s definition, the oldest person before Tran to stage such a public massacre was William Bevins, who at age 70 killed five men with an automatic rifle in a Kentucky auto-parts store in 1981.

A Post analysis found that 60 percent of mass killers over 50 die by suicide, like Tran, compared to 28 percent of assailants under 50. Societal suicide rates are highest among people over 75, which experts attribute to factors including loneliness, isolation and deteriorating physical health.

Carrying out a mass shooting at such a point in life is “not usual,” Conwell said. “Reflecting on it a little bit, I want to know more about these individuals and what kind of vulnerability they had.”

Even though older people tend to be more resilient than younger ones, there are always outliers, Conwell said.

“As individuals,” he said, “young people don’t have a corner on the market of being terribly unhappy and prone to acting out.”