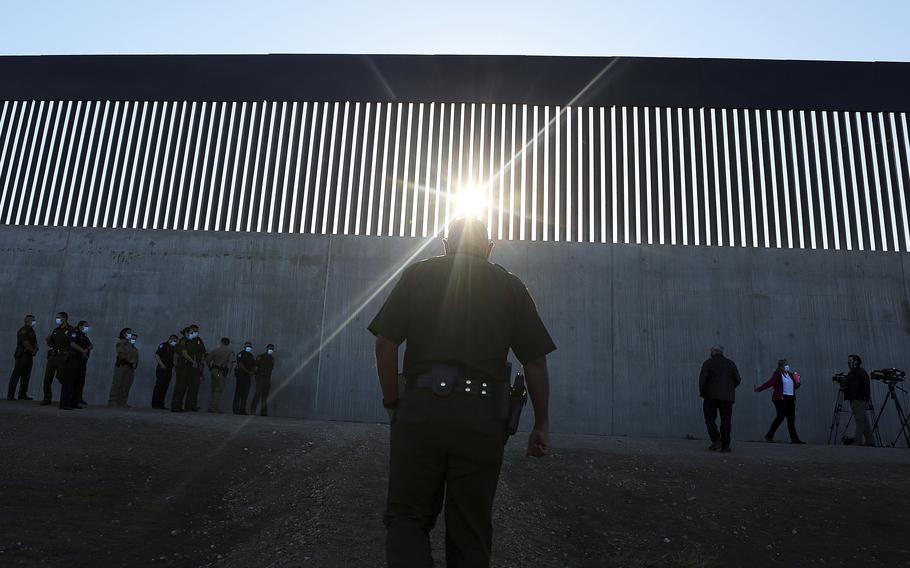 A U.S. Border Patrol agent walks up to a new section of the border wall before the arrival of Acting Homeland Secretary Chad Wolf, Thursday, Oct. 29, 2020, in McAllen, Texas. An investigation is underway after a Texas National Guard soldier allegedly shot and wounded a migrant during a struggle on the U.S-Mexico border this month. (Joel Martinez/The Monitor via AP)

AUSTIN, Texas — A Texas National Guard member shot and wounded a migrant during a struggle this month on the U.S.-Mexico border as the soldier tried to detain the person, according to records from the state military, which has not publicly disclosed the incident.

It's believed to be the first time that a Guard member deployed on a state border mission called Operation Lone Star has injured another person by firing a weapon. The migrant's injuries weren't life-threatening.

The Jan. 15 shooting came to light last week after it was first reported by the Army Times and Texas Tribune. The Texas Military Department did not respond to questions about how many times Guard members have fired a weapon since the mission began in 2021.

The handling of the shooting — described in an internal military report obtained by The Associated Press — has raised transparency concerns surrounding a $4 billion state-run border security operation that has grown in size and authority under Republican Gov. Greg Abbott. As of Tuesday, military officials had still not addressed questions about what happened or acknowledged that a weapon was fired.

"The state and the governor are almost the first to release information on how many people might have been detained or if there had been drugs interdicted," said Gil Kerlikowske, the former head of U.S. Customs and Border Protection during the Obama administration. "It seems completely counterintuitive that as soon as something happens that, you know, leads to some question or concern there is radio silence. That's just a fundamental mistake."

Firearms are not commonly used among the thousands of U.S. border agents and officers who encounter migrants along the Rio Grande, and Border Patrol officials say when shots are fired, it is common practice to let the public know.

It is not clear whether the soldier fired intentionally. According to an internal military summary, the soldier followed a Border Patrol unit into an abandoned house along the Rio Grande while pursuing four migrants. One resisted apprehension, according to the report, and began punching and wrestling the Guard member, who drew a personal firearm that "discharged once" as the migrant was falling on top of him.

The migrant was shot once in the left shoulder and taken to a McAllen hospital.

The Military Department referred questions to state police. Travis Considine, a spokesman for the Texas Department of Public Safety, said Texas Rangers are investigating and that the agency could not provide additional information. An Abbott spokeswoman did not respond to requests for information about the shooting.

Kerlikowske and other critics, including a border Texas lawmaker who learned of the shooting through news reports, say the closely guarded details cuts against what should be more openness, particularly when lethal force is used.

The border and high numbers of migrants crossing into the U.S. has become the signature issue for Abbott, who is beginning a record-tying third term as Texas governor and has not ruled out a presidential run in 2024. Lawmakers are poised to continue funding the mission, which includes roughly 5,000 Guard members, who are authorized to make arrests.,

Hinojosa, a member of a state Senate committee that monitors the state's border operation, said when his staff asked the Military Department for details they were told only that it was under investigation.

"For the lack of transparency on their part, not even notifying legislators that this incident occurred, it just creates more problems for them. People start thinking, well, they're trying to hide something," he said.

Rod Kise, a Border Patrol spokesman, said the "shots fired" incident was under review by Customs and Border Protection's Office of Professional Responsibility.

Under Kerlikowske, Border Patrol policy was to to put out a statement within four hours and hold a news conference within 24 hours after use-of-force incidents.

Within the Border Patrol, agents in recent years have been involved in an increasing number of use-of-force incidents, although most do not include firearms. In the 2022 fiscal year, 12 instances of firearms used by Border Patrol agents were reported on the southern border, according to federal statistics.

The National Guard Bureau has been in contact with the Texas National Guard leadership over the shooting, its chief, Gen. Dan Hokanson, said Tuesday.

"We're concerned with our Guardsmen, no matter what duty status that they're in. We're in close coordination and communication with the Texas National Guard leadership, and I know there's currently an ongoing investigation related to that," Hokanson said at a Pentagon briefing.