NEW YORK — A former high-ranking FBI counterintelligence official who investigated Russian oligarchs has been indicted on charges he secretly worked for one, in violation of U.S. sanctions. The official was also charged, in a separate indictment, with taking cash from a former foreign security officer.

Charles McGonigal, the special agent in charge of the FBI’s counterintelligence division in New York from 2016 to 2018, is accused in an indictment unsealed Monday of working with a former Soviet diplomat-turned-Russian interpreter on behalf of Oleg Deripaska, a Russian billionaire they purportedly referred to in code as “the big guy” and “the client.”

McGonigal, who had supervised and participated in investigations of Russian oligarchs, including Deripaska, worked to have Deripaska’s sanctions lifted in 2019 and took money from him in 2021 to investigate a rival oligarch, the Justice Department said.

The FBI investigated McGonigal, showing a willingness to go after one of its own. Nonetheless, the indictment is an unwelcome headline for the FBI at a time when the bureau is entangled in separate, politically charged investigations — the handling of classified documents by President Joe Biden and former President Donald Trump — as newly ascendant Republicans in Congress pledge to investigate high-profile FBI and Justice Department decisions.

McGonigal and the interpreter, Sergey Shestakov were arrested Saturday — McGonigal after landing at John F. Kennedy International Airport and Shestakov at his home in Morris, Connecticut — and held at a federal jail in Brooklyn. They both pleaded not guilty Monday and were released on bail.

McGonigal "has had a long, distinguished career with the FBI,” his lawyer, Seth DuCharme, told reporters when he left court with McGonigal following his arraignment.

“This is obviously a distressing day for Mr. McGonigal and his family, but we’ll review the evidence, we’ll closely scrutinize it and we have a lot of confidence in Mr. McGonigal," said DuCharme, the former top federal prosecutor in Brooklyn.

Messages seeking comment were left for lawyers for Shestakov and Deripaska. 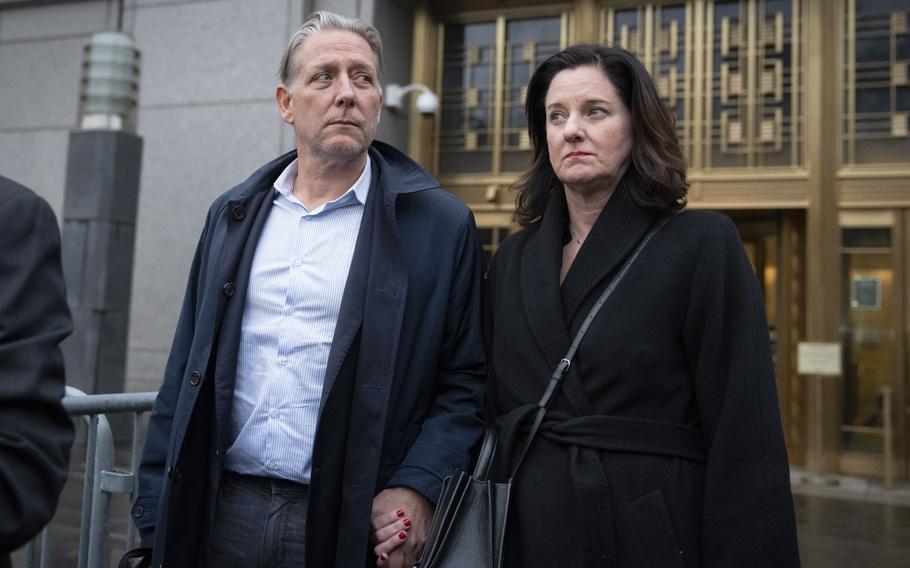 McGonigal was separately charged in federal court in Washington, D.C. with concealing at least $225,000 in cash he allegedly received from a former Albanian intelligence official while working for the FBI.

The indictment does not charge or characterize the payment to McGonigal as a bribe, but federal prosecutors say that, while hiding the payment from the FBI, he took actions as an FBI supervisor that were aimed at the ex-intelligence official's financial benefit.

They included proposing that a pharmaceutical company pay the man’s company $500,000 in exchange for scheduling a business meeting involving a representative from the U.S. delegation to the United Nations.

In a bureau-wide email Monday, FBI Director Christopher Wray said McGonigal’s alleged conduct “is entirely inconsistent with what I see from the men and women of the FBI who demonstrate every day through their actions that they're worthy of the public’s trust.”

The U.S. Treasury Department added Deripaska to its sanctions list in 2018 for purported ties to the Russian government and Russia’s energy sector amid Russia’s ongoing threats to Ukraine.

In September, federal prosecutors in Manhattan charged Deripaska and three associates with conspiring to violate U.S. sanctions by plotting to ensure his child was born in the United States.

Shestakov, who worked as an interpreter for federal courts and prosecutors in New York City after retiring as a diplomat in 1993, helped connect McGonigal to Deripaska, according to the indictment.

In 2018, while McGonigal was still working for the FBI, Shestakov introduced him to a former Soviet and Russian diplomat who functioned as an agent for Deripaska, the indictment said. That person is not named in court papers but the Justice Department says he was “rumored in public media reports to be a Russian intelligence officer.”

According to the indictment, Shestakov asked McGonigal for help getting the agent’s daughter an internship in the New York Police Department’s counterterrorism and intelligence units. McGonigal agreed, prosecutors say, and told a police department contact that, “I have an interest in her father for a number of reasons.”

According to the indictment, a police sergeant subsequently reported to the NYPD and FBI that the woman claimed to have an “unusually close relationship” with an FBI agent whom, she said, had given her access to confidential FBI files. The sergeant felt it was “unusual for a college student to receive such special treatment from the NYPD and FBI,” the indictment said.

After retiring from the FBI, according to the indictment, McGonigal went to work in 2019 as a consultant and investigator for an international law firm seeking to reverse Deripaska’s sanctions, a process known as “delisting.”

The law firm paid McGonigal $25,000 through a Shestakov-owned corporation, prosecutors say, though the work was ultimately interrupted by factors such as the COVID-19 pandemic.

In 2021, according to the indictment, Deripaska’s agent enlisted McGonigal and Shestakov to dig up dirt on a rival oligarch, whom Deripaska was fighting for control of a large Russian corporation, in exchange for $51,280 up front and $41,790 per month paid via a Russian bank to a New Jersey company owned by McGonigal’s friend. McGonigal kept his friend in the dark about the true nature of the payments, prosecutors say.

McGonigal is also accused of hiding from the FBI key details of a 2017 trip he took to Albania with the former Albanian intelligence official who is alleged to have given him at least $225,000.

Once there, according to the Justice Department, McGonigal met with Albania’s prime minister and urged caution in awarding oil field drilling licenses in the country to Russian front companies. McGonigal’s Albanian contacts had a financial interest in those decisions.

In an example of how McGonigal allegedly blurred personal gain with professional responsibilities, prosecutors in Washington say he “caused” the FBI’s New York office to open a criminal lobbying investigation in which the former Albanian intelligence official was to serve as a confidential human source.

McGonigal did so, prosecutors allege, without revealing to the FBI or Justice Department his financial connections to the man.