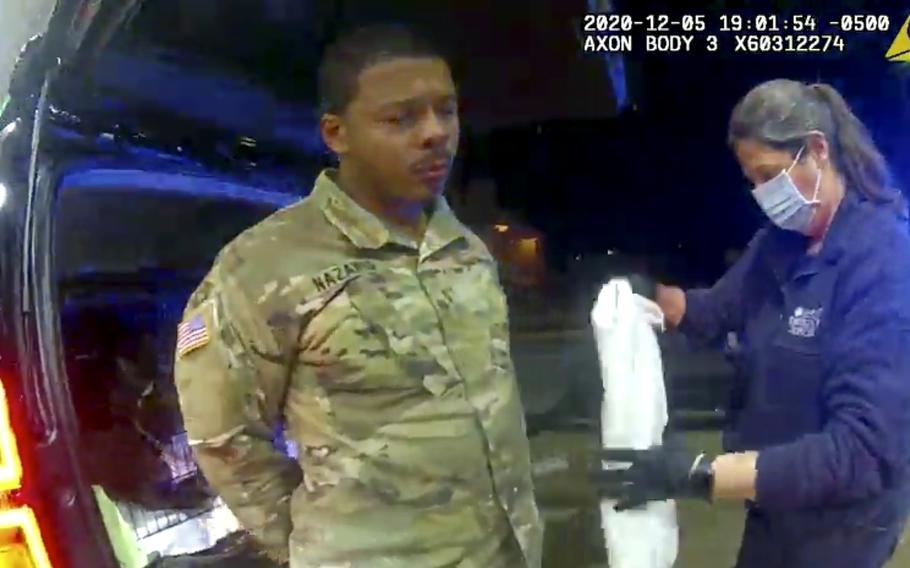 In this image taken from Windsor, Va., Police body camera footage, Lt. Caron Nazario is helped by an EMT after he was pepper-sprayed by Windsor police during a traffic stop in Windsor, on Dec. 20, 2020. (Windsor Police via AP)

RICHMOND, Va. — Attorneys representing a U.S. Army lieutenant who was pepper-sprayed, struck and handcuffed during a traffic stop have filed a motion for a new trial after a jury found mostly in favor of the police officers.

Attorney Tom Roberts said a new trial is essential to show the justice system works, WWBT-TV reported. The motion was filed Friday, days after a federal jury in Richmond awarded Lt. Caron Nazario less than $4,000 in a lawsuit in which he had sought more than $1 million.

"He was shocked, everybody was shocked, the nation was shocked," said Roberts, who co-represents Nazario. Letting the verdict stand would be a miscarriage of justice, Roberts said.

Video of the 2020 incident in the small town of Windsor got millions of views after Nazario filed the federal lawsuit, highlighting fears of mistreatment among Black drivers and raising questions about reasonable police conduct.

Last week, the jury found former Windsor police Officer Joe Gutierrez liable for assault and awarded Nazario $2,685 in compensatory damages, according to attorneys on both sides of the case.

Roberts said a new trial is needed because the jury also should have found that Gutierrez battered and falsely imprisoned Nazario.

"In this circumstance, with the assault that the jury found, it triggers the right for him to have that reasonable resistance to say I'm afraid to get out of the car and to stay in his car," Roberts said. "Therefore, everything they did after that point constitutes battery and assault."

Anne Lahren, one of Crocker's attorneys, said in a statement Monday that they planned to file an opposition to the motion for a new trial this week.

"A motion for a new trial seeks an extraordinary remedy reserved by the Courts for exceptional circumstances which are not present here," Lahren said. "Caron Nazario is unhappy with the jury's verdict and seeks to blame the trial itself rather than the merits, or lack thereof, of his own claims. We firmly believe that the jury got it right with its verdict."

Crocker is still on the force, but Gutierrez was fired in April 2021, the same month Nazario filed his lawsuit.

In August, a special prosecutor determined that Gutierrez should not be criminally charged but should be investigated for potential civil rights violations.