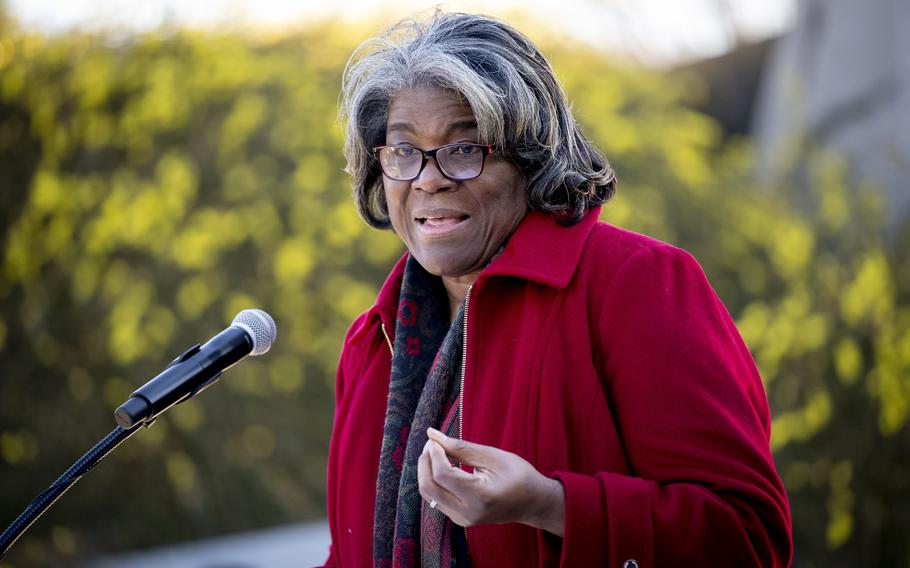 UNITED NATIONS — The U.S. ambassador to the United Nations, Linda Thomas-Greenfield, is the second Cabinet member heading to Africa as part of President Joe Biden's big push to engage with the world's second-largest continent.

The U.S. Mission to the U.N. said Sunday she will travel to Ghana, Mozambique and Kenya starting Jan. 25 "to affirm and strengthen our partnerships with key current and former U.N. Security Council members."

Biden announced at the end of a U.S.-Africa Leaders Summit in December that he will visit sub-Saharan Africa in 2023, the first trip to the region by a U.S. leader in a decade.

The summit and trip are aimed at strengthening U.S. relations with Africa, where China has surpassed the U.S. in trade and is aiming to increase its military presence, and Russia has military ties with the authorities in Mali and Central African Republic.

Biden stressed at the summit that he is serious about increasing U.S. attention to the continent and told the 49 African leaders attending the meeting in Washington that "Africa belongs at the table" in every conversation of global consequences.

The first stop for Thomas-Greenfield, a former U.S. assistant secretary of state for Africa, is Ghana, which is in the second year of a two-year term as an elected member of the Security Council. On Jan. 25 she will meet with women leaders and civil society representatives, the U.S. mission said.

Thomas-Greenfield then heads to Mozambique, which is just starting its first-ever two-year term on the council.

During her visit on Jan. 26-27, the U.S. mission said she will meet with U.N. officials, entrepreneurs, alumni of U.S. exchange programs, international relations students and civil society members engaged in work to adapt to climate change, the mission said.

The ambassador's final stop on Jan. 28-29 is Kenya, whose two-year term on the council ended on Dec. 31.

The U.S. mission called Kenya "a key partner" and said Thomas-Greenfield's visit will focus on humanitarian programs, including the regional response to drought and assistance to refugees, and on "the impact Russia's war against Ukraine continues to have on global food security, which has exacerbated the humanitarian crisis in the region."

The ambassador will also meet refugees pending resettlement in the United States and Kenya-based entrepreneurs "at the forefront of the country's transition to a green economy," the mission said.