The U.S. imports uranium from Russia. What if sanctions end that? 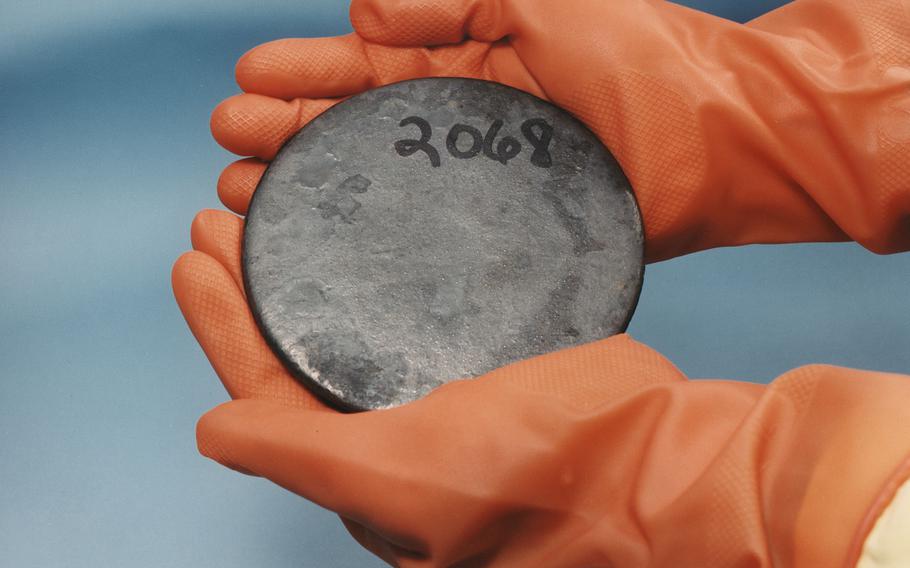 A billet of highly enriched uranium that was recovered from scrap processed at the Y-12 National Security Complex Plant. (DOE/Wiki Commons)

That has elevated prospects that the United States, and possibly the European Union, might place sanctions on Rosatom, which exports uranium for use in nuclear reactors.

U.S. reliance on Russian nuclear fuel is substantial, but American companies have some options if Rosatom is hit with sanctions.

How did the United States and Russia get entwined in the civilian nuclear business?

After the end of the Cold War, U.S. and Russian leaders agreed that Russia would dismantle some of its nuclear weapons and send them to the United States to be repurposed and used in civilian nuclear reactors - the megaton to megawatt program. That ended in 2013. Over the course of the 20-year program, as much as 10 percent of U.S. electricity came from fuel fabricated from Russian warheads.

Just how much uranium does the United States purchase from Russia now?

In 2021, the United States purchased 14 percent of its uranium from Russia.

However, Russia has the world’s largest uranium enrichment capabilities, accounting for almost half the global capacity. So most of its exports originate in other countries. Most of the uranium Russia exports is bought from Kazakhstan - a country that is landlocked and ships its uranium to Europe and the United States through Russia.

Will prices go up the way oil and natural gas prices did?

Henry Sokolski, executive director of the Nonproliferation Policy Education Center, said that “at worst, some long-term Russian supply contracts could not be executed, and that would perhaps raise the price of electricity one or two percent.”

But, he added, “given that we’re spending $100 billion plus to help Ukraine out, it would be rounding error.”

Can that source of supply be replaced quickly?

This isn’t a case of an unplanned Ukrainian winter. American utilities made long-range plans even before war broke out. Paul Adams, a spokesman for Constellation, the largest U.S. nuclear utility with 21 reactors, said that it has made purchases “years in advance” to secure enough fuel to last “multiple years - regardless of potential sanctions.” To do so requires that uranium is mined, enriched and installed in fuel rods.

But the scramble for more natural uranium supplies is already underway and prices, which had dipped, have recovered. The United States has looked to Canada where Cameco, the world’s second-largest uranium supplier, has agreed to reopen two of its major mines. In addition, another Canadian mining company, Global Atomic, said it will develop a uranium mine in Niger that might start up in 2025.

Are there other options for U.S. companies?

More difficult than mining for uranium is Russia’s domination of the process of enriching it, said Frank N. von Hippel, co-founder of Princeton University’s Program on Science and Global Security and the International Panel on Fissile Materials. He said that one way to deal with that would be to “overfeed” reactors so that more natural uranium goes in and more of the Uranium 235 goes into the reactor’s depleted uranium waste product.

Von Hippel thinks some uranium from Kazakhstan could be exported through China. Jessica Reyes Sondgeroth, deputy editor of Nuclear Intelligence Weekly, said that was “perfectly legal,” but difficult given trade tensions. And Zhang Hui, of Harvard University’s Kennedy School of Government, said in an email that China’s enrichment capacity “is just able to meet (or match) its own domestic reactors’ needs.”

How much would sanctions hurt the Russia economy?

U.S. and European customers of Russian uranium and enrichment comes to about $1 billion, according to von Hippel. That is tiny compared with the impact of sanctions on Russian oil and natural gas, but von Hippel said it would be a setback for Rosatom, which has estimated its foreign earnings to be around $8 billion.

Can Rosatom evade U.S. sanctions through a middleman?

Earlier this year, Europe and the United States were able to target Russian oil and gas shipments even though there were traders and shipping companies in the middle of those deals. Those middlemen were vulnerable too.

In general, Russian nuclear fuel material is bought through Tenex, a Rosatom subsidiary, and Centrus Energy, the U.S. entity, according to one U.S. company.

Will the United States impose sanctions on its own or with its European allies?

There are a couple of obstacles for Europeans. A handful of reactors with Russian designs are situated in the European Union. They will need Russian refueling.

U.S. companies are more likely to support the administration’s position. “Constellation stands with Ukraine against this unprovoked invasion, and we support U.S. and international efforts to bring the war to an end,” Adams said in an email.