In Senegal, Yellen talks about future of US-Africa relations 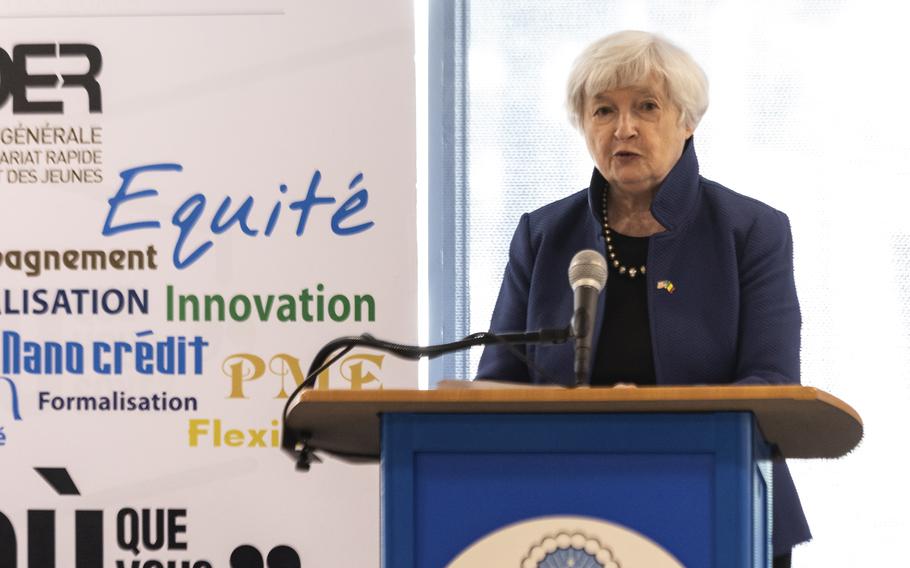 U.S. Treasury Secretary Janet Yellen delivers a speech to the General Delegation for Rapid Entrepreneurship of Women and Youth in Dakar, Senegal, Friday Jan. 20, 2023. The Biden administration’s big push to engage more with Africa is underway as Yellen begins a 10-day visit aimed at promoting all the economic possibilities that lie between the U.S. and the world’s second-largest continent. (Stefan Kleinowitz/AP)

DAKAR, Senegal — U.S. Treasury Secretary Janet Yellen caravanned from a government building to a business incubator in Dakar on Friday and was set to end her day at the president's residence, spreading a message of mutually beneficial U.S.-Africa relations.

She came to talk about making the multilateral banks — like the World Bank and the International Monetary Fund — more fair to developing countries' interests, constructing new projects such as the largest wind farm in West Africa and committing new funds to education and health care on the continent.

Trying to set a tone of African self-determination after countless years of colonial brutalism, Yellen embarked Wednesday on a 10-day visit of three African nations, starting with Senegal, aimed at promoting all the economic possibilities that lie between the U.S. and the world's second-largest continent.

Yellen's motorcade weaved through Dakar's traffic on busy streets that lined the beach, passing crowds of people dressed in their Friday best, as the most important day of her visit came on the weekly holy day in the Muslim-majority country.

Her biggest speech came Friday morning at a business incubator and co-working space in Dakar that provides credit and sector-specific technical assistance to young and female entrepreneurs. She shared a wide-ranging vision of Africa's potential business ventures with the U.S. and how the U.S. has already invested in the continent.

"Africa continues to lead as the youngest continent in the world. Here in Senegal, the median age is 19 years. 1.7 million Africans now enter the job market every month," Yellen said. "And by 2035, the number of Sub-Saharan Africans reaching working age will exceed that of the rest of the world combined."

"A rising share of working age people," she said, "presents an opportunity for the continent."

The young entrepreneurs she met with Friday owned businesses that spanned sectors, including food processing, baby food production, cosmetics, digital marketing and sanitation, among others.

She talked about how the U.S. Development Finance Corp. has committed more than $11 billion across Africa and how the Millennium Challenge Corp., a U.S. foreign assistance agency, is working in 14 African countries with more than $3 billion in active programs, with more in the pipeline.

"We intend to invest over $350 million to expand affordable internet access and boost digital skills and entrepreneurship," she said.

Yellen also warned about the risks of exploitation of this growth — pointing at China's massive investments in African nations, which critics have said contain unfair terms and leave nations saddled with high amounts of debt.

"Countries need to be wary of shiny deals that may be opaque and ultimately fail to benefit the people they were purportedly designed to help in the first place," she said.

Yellen will also make a stop in Zambia, which will serve to highlight its huge debt to China, its biggest creditor. Zambia is renegotiating the nearly $6 billion debt, and Yellen has been critical of China's failure to make progress on negotiations.

"The international community, including China, needs to provide meaningful debt relief to help countries regain their footing," she said. "Timely debt relief is in the interests of both debtors and creditors."

The Treasury secretary also called for ending the Russian invasion of Ukraine, wading into politically murky territory in Africa, where some heads of state have not condemned the invasion due to relations they have with Russia.

"Russia's barbaric aggression against its neighbor is particularly being felt by Africa and its people." Yellen said Friday. "Russia's war and weaponization of food has exacerbated food insecurity and caused untold suffering. And the global economic headwinds caused by the actions of a single man — President (Vladimir) Putin — is creating an unnecessary drag on Africa's economy."

Yellen's meetings on Friday included a roundtable with Senegal's Minister of Economy Oulimata Sarr and talks with young female business owners. She will end her day at a dinner at President Macky Sall's residence.