US drops case against NYC cop accused of spying for China 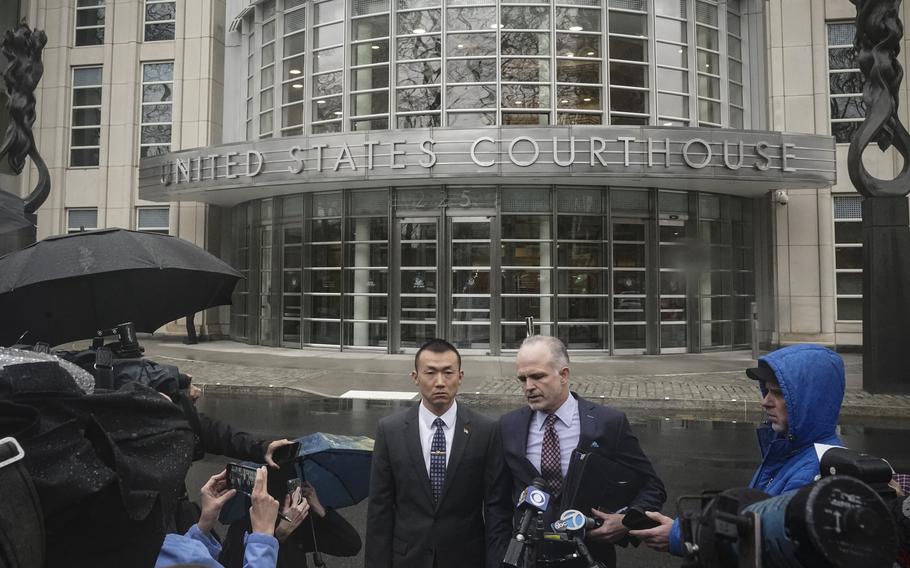 NEW YORK — Charges against a New York City police officer accused of spying on behalf of China were formally dropped Thursday after U.S. prosecutors said they uncovered new information that warranted the dismissal.

It ended a two-year ordeal for Baimadajie Angwang, a naturalized U.S. citizen born in Tibet, who spent about six months in custody before being granted bail. He had been accused of spying on expatriate Tibetans in New York on behalf of officials at the Chinese consulate in the city.

Outside the federal courthouse in Brooklyn, Angwang, wearing a pin of the American flag on his lapel, thanked his family and his supporters, including those on the city's police force and the U.S. Marine Corps, where he formerly served.

During a brief court appearance, prosecutors said they were dropping charges "in the interest of justice." U.S. District Judge Eric Komitee tried to prompt prosecutors to share what they could about their change of mind, but they declined to reveal what new information led them to do so.

"The decision was based on all the evidence and information developed," Assistant U.S. Attorney Matthew Hagans told the judge, adding that some of the information were too sensitive in nature to discuss in open court.

The prosecution is among several brought by the Justice Department alleging spying for China that have fallen apart in recent years, though the details of Angwang's case differed from the others, which involved academics.

A year ago, federal prosecutors dropped their case against a Massachusetts Institute of Technology professor who had been accused of concealing ties to the Chinese government. In 2021, a judge acquitted a professor at the University of Tennessee who had faced similar charges. Those prosecutions were brought as part of an initiative, begun during the Trump administration but later dropped, to root out economic espionage by Beijing.

In Angwang's case, the U.S. attorney's office in Brooklyn had claimed that he began working as an agent for China in 2018 and was secretly supplying information on Tibetans pushing for their homeland's independence from the communist government. It said he had worked to locate potential intelligence sources and identify potential threats to Chinese interests.

The government case partly relied on intercepted communications between Angwang and a consulate official — someone Angwang called "big brother" and "boss" — about how to identify dissenters in the independence movement.

There was no allegation that Angwang compromised national security or New York Police Department operations. When prosecutors filed their case in 2020, they deemed him "the definition of an insider threat."

Angwang initially traveled to the United States on a cultural exchange visa at age 17. He overstayed a second visa and eventually sought asylum in the United States, alleging he had been arrested and tortured in China partly because of his Tibetan ethnicity.

In court filings, Angwang's attorney said any discussions with the Chinese consulate were meant to curry favor so he could obtain a visa to visit relatives in Tibet.

After Thursday's proceedings, Angwang's attorney, John Carman, said his client was "innocent from the very beginning."

"As an American, he is a great one," Carman told reporters.

Angwang, 36, has worked at an NYPD precinct in Queens as a community liaison. His lawyer said they were still considering how to proceed to get him reinstated to the police force.

After gaining asylum, Angwang became a Marine and served in Afghanistan before being honorably discharged, according to court papers filed by his attorney. Angwang went on to join the Army Reserve and the NYPD, earning a "Cop of the Month" award at his precinct in September 2018, according to the court filing.

He is currently suspended, with pay from the NYPD, the department said. The U.S. Army Reserve said Angwang was "administratively separated" on Jan. 21, 2021, but it didn't specify why. It said federal law allows some discharged reservists to reenter on a case-by-case basis.

Last fall, federal authorities in New York charged seven people, including five in China, with what they said was a campaign of harassment against a Chinese national and his family living in the U.S. to force him to return home.

The U.S. attorney's office alleged the threats and harassment continued for years and were part of "Operation Fox Hunt," characterized by the FBI as an illegal global effort by China to locate and repatriate alleged fugitives who flee to foreign countries.

In another case, two suspected Chinese intelligence officers were charged with attempting to obstruct a U.S. criminal investigation of Chinese tech giant Huawei by offering bribes to someone they thought could provide inside information.

Tibet has been an especially sensitive issue for communist China.

China says Tibet has historically been part of its territory since the mid-13th century, and China's ruling Communist Party has governed the Himalayan region since 1951. But many Tibetans say they were effectively independent for most of their history and that Beijing wants to exploit their resource-rich region while crushing their cultural identity.