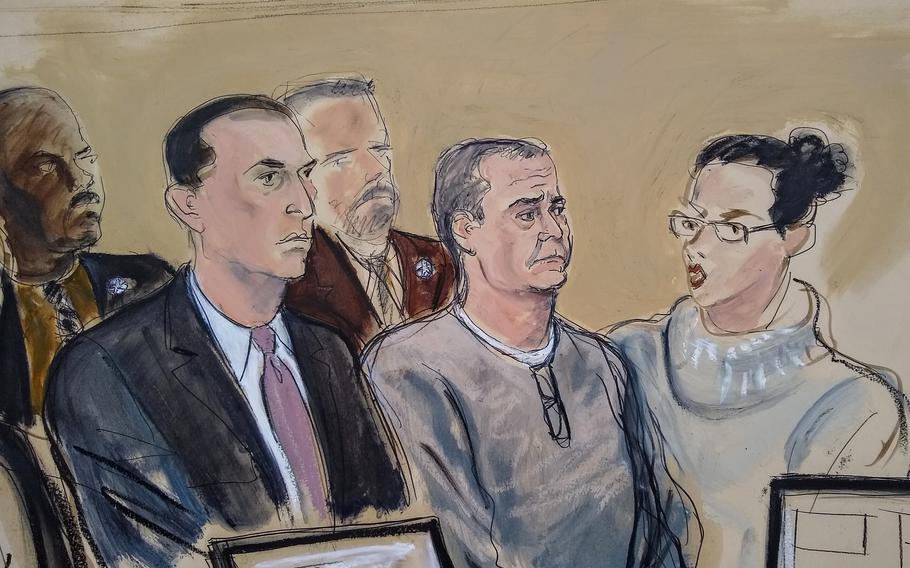 MEXICO CITY — The man who was once Mexico's top security official and in charge of fighting the drug cartels was scheduled to go on trial Tuesday on charges he accepted millions of dollars in bribes in exchange for helping the powerful Sinaloa Cartel move drugs and its members avoid capture.

Genaro García Luna was best known as the mumbling, tough-looking former security secretary under ex-President Felipe Calderón, who spearheaded the bloody war on cartels between 2006 and 2012.

Prosecutors say García Luna was so brazen he accepted tens of millions of dollars, often stuffed in briefcases. The evidence against him includes pay stubs, though whether they are from official jobs, private sector consultancy, cartel payments or other bribes is unclear.

They say he continued to live off his ill-gotten proceeds even after he moved to the United States, where he was arrested in 2019, though the defense says he was a legitimate businessman. Jury selection was scheduled to begin Tuesday.

In the end, the case could reveal the inner workings of how Mexican cartels have been able to operate so openly for so long: by bribing Mexican police and military right up to the top ranks.

"For decades, Mexico's political elite, of all parties, has sought by any means to have security ministers, generals, police commanders, interior secretaries and high-ranking officials tried and imprisoned in Mexico. … All that to avoid them giving information on the ties between the drug cartels and politicians," said Mexican security analyst David Saucedo. "García Luna's trial in the United States breaks with that pattern."

Mexican President Andrés Manuel López Obrador has welcomed the trial, which is expected to cast light on corruption in the administration of Calderón, whom the president accuses of robbing him of the presidency in 2006.

But López Obrador himself fought tooth and nail to avoid a U.S. trial of former Defense Secretary Gen. Salvador Cienfuegos on similar charges in 2020, at one point threatening to kick agents from the U.S. Drug Enforcement Administration out of Mexico unless the general was returned, which he was.

The trial begins just days after U.S. President Joe Biden met with López Obrador in Mexico City. The two governments pledged continued cooperation against the drug cartels, especially against the scourge of the synthetic opioid fentanyl, which contributed to more than 107,000 drug overdose deaths in the U.S. in 2021. López Obrador scrapped the civilian federal police force that García Luna once led and put the military in charge of much of the country's security.

"It's not the same to put a civilian PAN official on trial, as it is to put a defense secretary on trial, when your whole national security policy rests on the armed forces," said Ana Vanessa Cárdenas, an international security analyst at the Anahuac University, referring to Calderón's conservative National Action Party.

García Luna has pleaded not guilty to drug trafficking charges and a continuing criminal enterprise. He could face decades in prison if convicted.

What he will face in a Brooklyn courtroom is a parade of government witnesses, including high-level cartel members of a kind not seen in Brooklyn since Sinaloa boss Joaquín "El Chapo" Guzmán was convicted there in 2019 and sentenced to life in prison. Some accusations against García Luna surfaced at the Guzmán trial.

"While holding public office, (García Luna) used his official positions to assist the Sinaloa Cartel … in exchange for multimillion-dollar bribes," U.S. Attorney Breon Peace wrote in a court filing last week. "At trial, the government expects that numerous witnesses, including several former high-ranking members of the Sinaloa Cartel, will testify about bribes paid to the defendant in exchange for protection."

In exchange for the bribes, García provided the Sinaloa Cartel with "safe passage for its drug shipments, sensitive law enforcement information about investigations into the cartel, and information about rival drug cartels," Peace wrote. "These payments allowed the cartel at times to receive warnings in advance of law enforcement efforts to apprehend cartel members and to allow cartel members to be released if arrested."

Before convicting Guzmán in 2019, jurors in his New York trial heard former cartel member Jesús Zambada testify that he personally made at least $6 million in hidden payments to García Luna, on behalf of his older brother, cartel boss Ismael "El Mayo" Zambada.

The cartel is now believed to be run by Zambada and at least three of Guzmán's sons, one of whom was arrested earlier this month on an extradition request from the United States.

García Luna isn't the first top Mexican official arrested for involvement with drug traffickers. Gen. Jesús Gutiérrez Rebollo was made Mexico's drug czar by President Ernesto Zedillo in 1996. He was arrested the following year after it was discovered he was living in a luxury apartment owned by the leader of the Juarez cartel, Amado Carrillo Fuentes.