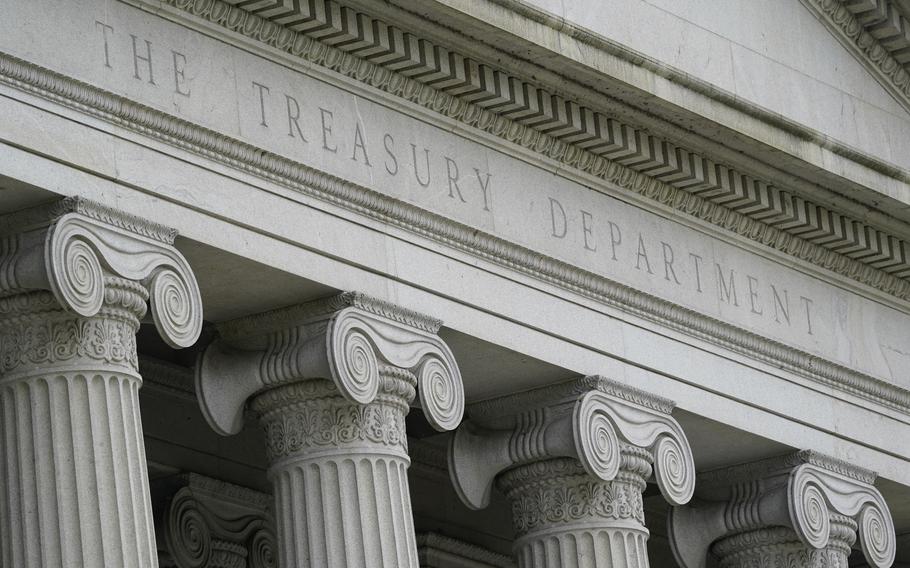 The Treasury Building is viewed in Washington, May 4, 2021. The U.S. hit three more Iranian security officials with financial sanctions Wednesday in response to the Iranian government’s continued crackdown on protests over the September death of 22 year-old Mahsa Amini. Treasury’s Office of Foreign Assets Control says the Iranian regime has increased its aggressive actions against its citizens “as part of its ongoing suppression of peaceful protests against a regime that denies human rights and fundamental freedoms to its people, especially women and girls.” (Patrick Semansky/AP)

WASHINGTON — The United States on Wednesday imposed sanctions against three more Iranian security officials in response to the Tehran government's continued crackdown on protests after 22-year-old Mahsa Amini died while being held by the morality police for violating the country's strictly enforced Islamic dress code.

Hassan Asgari, Alireza Moradi and Mohammad Taghi Osanloo were the latest Iranian officials cited by the Treasury Department. The three allegedly assisted in spreading military control over largely Kurdish areas, including Sanandaj and Mahabad, which have "faced a particularly severe security response" since the protests began in September, according to the department.

Activists said Iranian security forces on Monday used heavy gunfire against demonstrators in a western Kurdish town, killing at least five during an anti-government protest at the funeral of two people killed the day before.

The Treasury's Office of Foreign Assets Control said the Iranian government has increased its aggressive actions against its citizens "as part of its ongoing suppression of peaceful protests against a regime that denies human rights and fundamental freedoms to its people, especially women and girls."

The demonstrations started after Iran's morality police arrested Amini on Sept. 13 in Tehran, which she was visiting from her hometown in the country's western Kurdish region. Police detained her over wearing her hijab too loosely. Iran requires women to wear the headscarf in a way that completely covers their hair when in public.

She collapsed at a police station and died three days later.

Amini remains a potent symbol in protests that have posed one of the most serious challenges to the Islamic Republic since the 2009 Green Movement protests drew millions to the streets.

"The Iranian regime is reportedly targeting and gunning down its own children, who have taken to the street to demand a better future," said Brian Nelson, undersecretary for terrorism and financial intelligence. "The abuses being committed in Iran against protestors, including most recently in Mahabad, must stop."

The U.S. already has imposed sanctions on members of Iran's intelligence agency, leaders of Iran's Revolutionary Guard, prison wardens and others. The Treasury Department has also increased access to American companies that want to provide internet in the country.