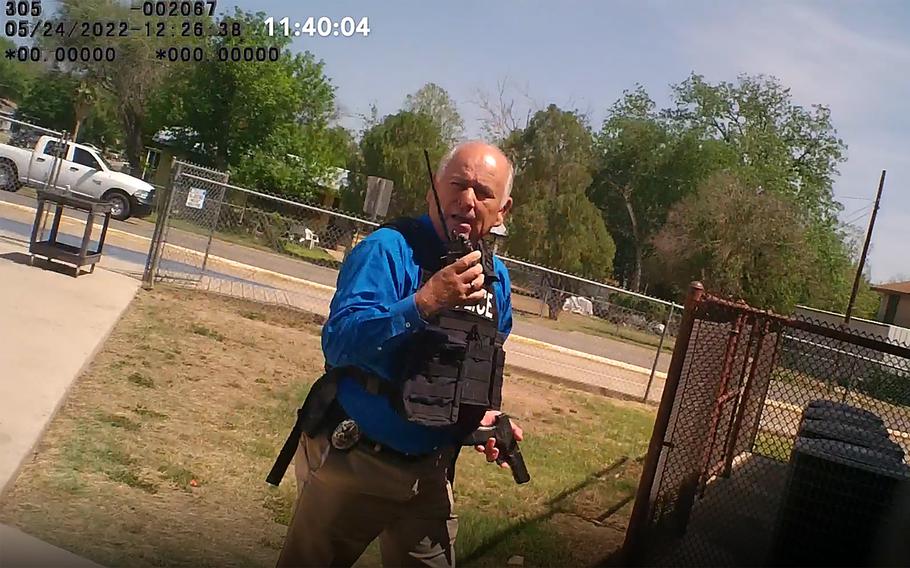 DALLAS — The Uvalde officer who was leading the city's police department during the hesitant law enforcement response to an elementary school shooting that killed 19 children and two teachers has stepped down, a city spokeswoman said.

Lt. Mariano Pargas retired on Thursday afternoon after 18 years working for the city, according to spokeswoman Gina Eisenberg. She said his retirement was immediate but the city is still processing the paperwork.

Pargas is the second police leader to leave law enforcement in the fallout since the massacre in May, when hundreds of officers waited more than an hour to confront the gunman inside a classroom at Robb Elementary School. His retirement comes ahead of a Saturday meeting at which the city council was set to consider firing him.

Pargas could not be immediately reached for comment. He previously told CNN that his lawyer instructed him not to speak publicly but, “there’s a lot of stuff that I can explain, that I would love to defend myself.”

The city placed Pargas, who was running the department during the shooting because the chief, Daniel Rodriguez, was out of town, on administrative leave in July following a damning report from lawmakers on the police response. His departure comes days after new audio highlighted that Pargas was told there were children alive in a classroom with the gunman half an hour before officers breached the room.

In the months after the shooting, state officials have focused blame on the school district police chief, Pete Arredondo, saying he made “terrible decisions” as the on-scene commander not to confront the gunman sooner. Arredondo was fired in August but has said he didn’t consider himself the person in charge and assumed someone else had taken control of the police response that eventually swelled to nearly 400 officers.

Audio recordings published by CNN show that as officers were massing around the school a dispatcher told Pargas there were “eight to nine" kids still alive inside the classroom where the shooter was holed up. Pargas can be heard acknowledging the information but more than 30 minutes would pass before a tactical team entered and killed the gunman.

Authorities have said the gunman did most of his shooting within minutes of entering the classroom but it’s unclear whether there’s an official tally of how many children in the room survived. Corina Camacho, whose son was shot and was one of the survivors, told The Associated Press that 11 children were not killed and their families try to stay in touch. Kids have publicly recounted playing dead to avoid being noticed by the gunman.

In addition to Pargas' retirement and Arredondo's ouster, victims families and some lawmakers have called in recent months for the resignation or firing of Col. Steve McCraw, the head of the Texas Department of Public Safety. Body camera footage, a legislative investigation and media reports have shown the state police had a larger role at the scene than the department appeared to suggest in the immediate aftermath of the shooting.

Ninety-one DPS troopers were among the 376 law enforcement officers who ultimately responded. Seven were put under internal investigation this summer, but McCraw has defended his agency's overall response, saying it “did not fail” Uvalde.

At a meeting Wednesday of the Uvalde County commissioners’ court, community members called on Pargas to resign from the panel. Pargas, who was re-elected to county government on Nov. 8, was absent from the meeting, the Uvalde Leader-News report ed.

Berlinda Arreola, whose 10-year-old granddaughter Amerie Jo Garza was killed, said Pargas needed to do “the right thing” and step down, according to CNN.

“He was a coward that day and he’s cowardly now, that he couldn’t show face,” Arreola said.

At a school board meeting the same day, Josh Gutierrez was named interim chief of police for the Uvalde school district. Gutierrez will lead the handful of officers who have been hired since the shooting. Five officers who were part of the law enforcement response were assigned other duties pending the outcome of an investigation into their actions that day.

Interim superintendent Gary Patterson opened the meeting by talking about the courage that the families of the victims have shown. Patterson takes the spot from Hal Harrell, who announced last month his plans to retire.

“We have all the respect in the world for how you’ve handled things in the worst possible circumstance,” Patterson said.

School district trustees on Wednesday also approved the location of the new school that will replace Robb Elementary, deciding it will be built next to another school a few miles away. The board decided months ago to demolish Robb Elementary and on Wednesday recommended forming a committee to decide what should happen to the site. ___