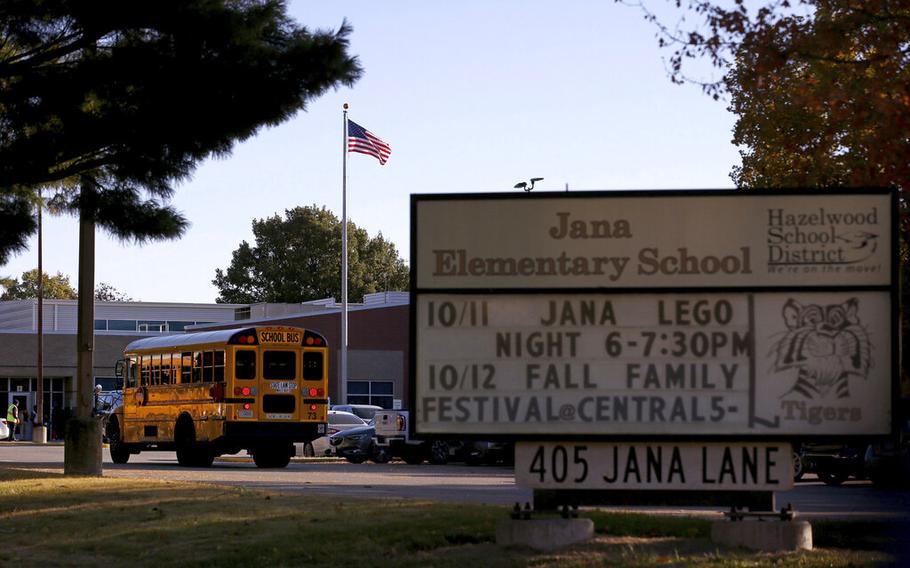 A school bus arrives at Jana Elementary School on Oct. 17, 2022, in Florissant, Mo. Another round of testing found no harmful radioactive contamination at the Missouri elementary school, leaving school board members to wonder if there really is any risk at the now-shuttered school. (Christian Gooden/St. Louis Post-Dispatch via AP)

FLORISSANT, Mo. — Another round of testing found no harmful radioactive contamination at a Missouri elementary school, leaving school board members to wonder if there really is any risk at the now-shuttered school.

Jana Elementary School in the St. Louis suburb of Florissant was shut down last month after testing by a private company found contamination on the kindergarten playground and inside the building. The private study was funded by lawyers whose clients are suing over radioactive contamination in Coldwater Creek, which runs near the school.

The results prompted the U.S. Army Corps of Engineers to conduct its own investigation. The agency announced last week that it found no contamination inside the school or in multiple soil samples on the outside.

The Hazelwood School District then ordered a third round of testing from SCI Engineering. Jessica Keeven of SCI told the school board Tuesday night that the building and grounds do not contain harmful levels of radioactive material, the St. Louis Post-Dispatch reported.

The school opened in 1970 and sits in the flood plain of Coldwater Creek, which was contaminated with radioactive waste generated when Mallinckrodt Chemical processed uranium in the 1940s and 1950s for atomic weapons. The waste was initially stored at Lambert Airport, near the creek, then later trucked to an industrial area that also borders the creek.

The site near the airport has largely been cleaned up but remediation of the creek itself won't be finished until 2038, Corps officials have said.

The contamination finding in a report released in October by Boston Chemical Data Corp. created enough concern that the school board closed the school and moved classes online. Jana students and staff will be moved to other schools after the Thanksgiving break.

Board members acknowledged that the "conflicting" reports created some confusion about what to do next. Member Kevin Langley said he wasn't convinced that the health risk for children in the school building is greater than their risk in their homes near Coldwater Creek.

"What do we do to remediate Jana Elementary School and how do we ever declare it as safe for reuse?" he asked.

Marco Kaltofen of Boston Chemical told the board that his process differed from the Corps. He said he used X-ray analysis on the dust and soil samples.

Kaltofen said he "agonized" over the findings but "as a parent, as a human being I understand these are not things our kids should be exposed to."