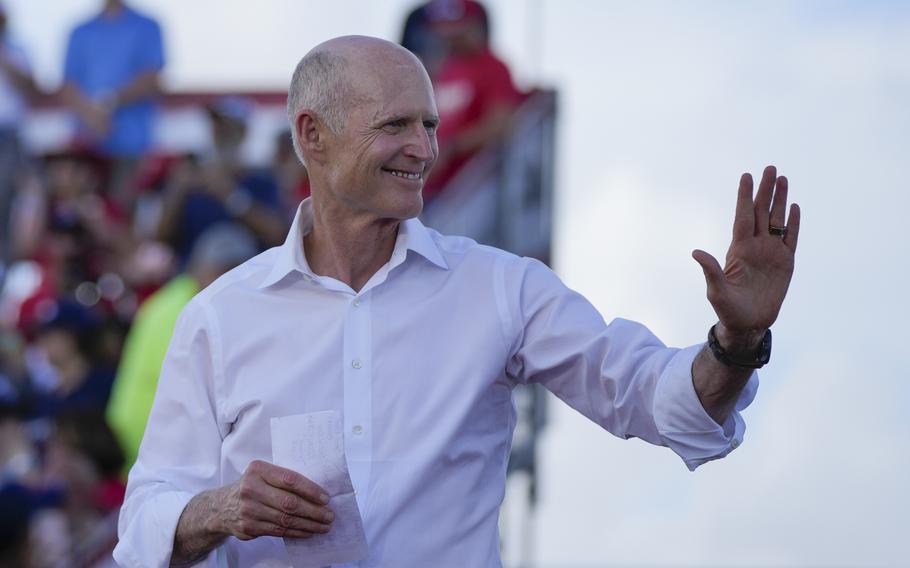 Sen. Rick Scott, R-Fla., arrives to speak before former President Donald Trump at a campaign rally in support of the campaign of Sen. Marco Rubio, R-Fla., at the Miami-Dade County Fair and Exposition on Sunday, Nov. 6, 2022, in Miami. (Rebecca Blackwell/AP)

WASHINGTON — Florida Sen. Rick Scott is mounting a long-shot bid to unseat Senate Republican leader Mitch McConnell, a rare challenge for the longtime GOP stalwart after his party failed to win back the majority in the midterm elections.

Scott, the leader of the GOP's Senate campaign efforts who has long feuded with McConnell over the midterm elections, was one in a small group of senators who wrote a letter to the Republican caucus over the weekend asking for a delay in this week's leadership elections "to have serious discussions within our conference as to why and what we can do to improve our chances in 2024."

Republican senators were having those discussions at their regular party lunch on Tuesday, but they were not expected to end in McConnell's defeat. The Kentucky senator, who has been Senate GOP leader for the last 15 years, was confident he had the backing to return for another Congress.

"Of course" I have the votes, he told reporters on Monday.

While unlikely to succeed, Scott's unexpected challenge to McConnell comes as Republicans are wrestling over a lackluster performance in the midterms, when the party out of power historically sees significant gains. Instead, the Senate will stay in Democratic hands and the House margin is so narrow that it hasn't been called yet.

"I believe it's time for the Senate Republican Conference to be far more bold and resolute than we have been in the past," Scott said in a letter he sent to colleagues as the GOP meeting was still going on. "We must start saying what we are for, not just what we are against."

Scott listed the many reasons he was running, including that Republicans had compromised too much with Democrats in the last Congress — producing bills that President Joe Biden has counted as successes and that Democrats ran on in the 2022 election.

Many Republican senators going into Tuesday's meeting called it a "family conversation" that was necessary. But most appeared to be sticking with McConnell, a master of Senate procedure who has made protecting his incumbent senators his top priority.

"Mitch has ice in his veins," said North Dakota Sen. Kevin Cramer before the meeting. Speculating before Scott announced his bid, Cramer said the "obvious problem" is that Scott led the National Republican Senatorial Committee, the party's Senate campaign arm.

"If you're going to make this about assessing blame for losing an election, I don't know how the NRSC chairman gets off the hook," Cramer said.

The feud between Scott and McConnell has been percolating for months and reached a boil after the party's lackluster showing in last week's midterm elections, according to senior Republican strategists who insisted on anonymity to discuss internal deliberations.

Operatives for the two have traded barbs for more than a year over the handling of Senate Republican political strategy — or, in the view of some, the lack thereof.