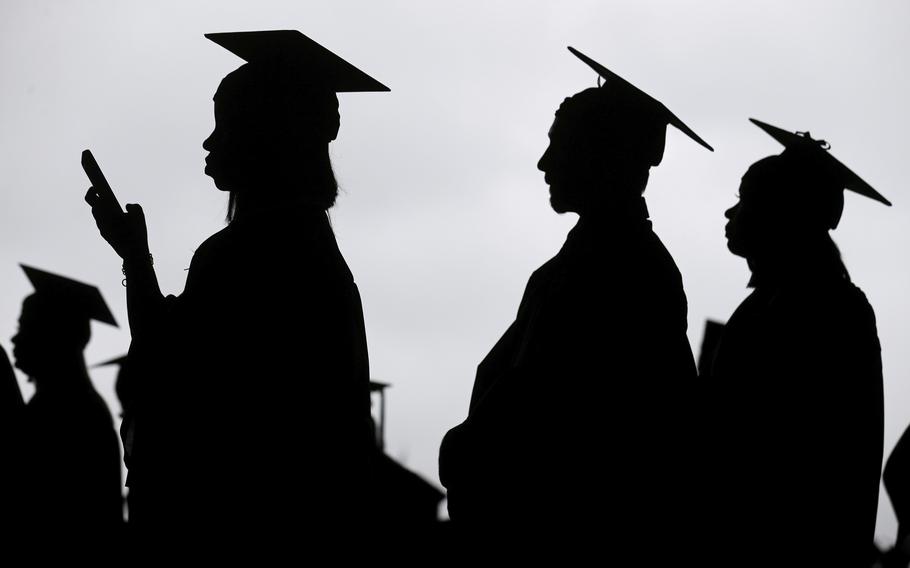 New graduates line up before the start of a community college commencement in East Rutherford, N.J., May 17, 2018. A federal judge in St. Louis on Thursday, Oct. 20, 2022, dismissed an effort by six Republican-led states to block the Biden administration's plan to forgive student loan debt for tens of millions of Americans. (Seth Wenig/AP)

ST. LOUIS — President Joe Biden’s plan to forgive student loan debt for millions of borrowers was handed another legal loss Monday when a federal appeals court panel agreed to a preliminary injunction halting the program while an appeal plays out.

The ruling by the three-judge panel from the 8th U.S. Circuit Court of Appeals in St. Louis came days after a federal judge in Texas blocked the program, saying it usurped Congress’ power to make laws. The Texas case was appealed and the administration is likely to appeal the 8th Circuit ruling as well.

The plan would cancel $10,000 in student loan debt for those making less than $125,000 or households with less than $250,000 in income. Pell Grant recipients, who typically demonstrate more financial need, would get an additional $10,000 in debt forgiven. The cancellation applies to federal student loans used to attend undergraduate and graduate school, along with Parent Plus loans.

The Congressional Budget Office has said the program will cost about $400 billion over the next three decades.

A federal judge on Oct. 20 allowed the program to proceed, but the 8th Circuit the next day temporarily put it on hold while it considered an effort by the states of Nebraska, Missouri, Iowa, Kansas, Arkansas and South Carolina to block the loan forgiveness plan.

The new ruling from the panel made up of three Republican appointees — one was appointed by President George W. Bush and two by President Donald Trump — extends the hold until the issue is resolved in court.

Part of the states’ argument centered around the financial harm the debt cancellation would cause the Missouri Higher Education Loan Authority.

“This unanticipated financial downturn will prevent or delay Missouri from funding higher education at its public colleges and universities,” the 8th Circuit ruling stated.

Nebraska Attorney General Doug Peterson, a Republican, said in a statement that the ruling “recognizes that this attempt to forgive over $400 billion in student loans threatens serious harm to the economy that cannot be undone. It is important to stop the Biden administration from such unlawful abuse of power.”

White House Press Secretary Karine Jean-Pierre said in a statement that the administration believes there is legal authority for the program and that “it is necessary to help borrowers most in need as they recover from the pandemic.”

“The Administration will continue to fight these baseless lawsuits by Republican officials and special interests and will never stop fighting to support working and middle class Americans,” the statement added.

Both federal cases centered around the Higher Education Relief Opportunities for Students Act of 2003, commonly known as the HEROES Act. It was enacted after the 9/11 terrorist attacks, allowing the secretary of education to waive or modify terms of federal loans in times of war or national emergency.

Lawyers for the administration contend the COVID-19 pandemic created a national emergency and that student loan defaults have skyrocketed over the past 2½ years.

But in the Texas ruling on Thursday, U.S. District Judge Mark Pittman — an appointee of Trump based in Fort Worth — said the HEROES ACT did not provide the authorization that the Biden administration claimed it did.

“Courts have issued orders blocking our student debt relief program,” the Education Department said on its federal student aid website. “As a result, at this time, we are not accepting applications. We are seeking to overturn those orders.”

The legal challenges have created confusion about whether borrowers who expected to have debt canceled will have to resume making payments come Jan. 1, when a pause prompted by the COVID-19 pandemic is set to expire.

Economists worry that many people have yet to rebound financially from the pandemic, saying that if borrowers who were expecting debt cancellation are asked to make payments instead, many could fall behind on the bills and default.