Biden courted oil companies before threatening them with windfall tax 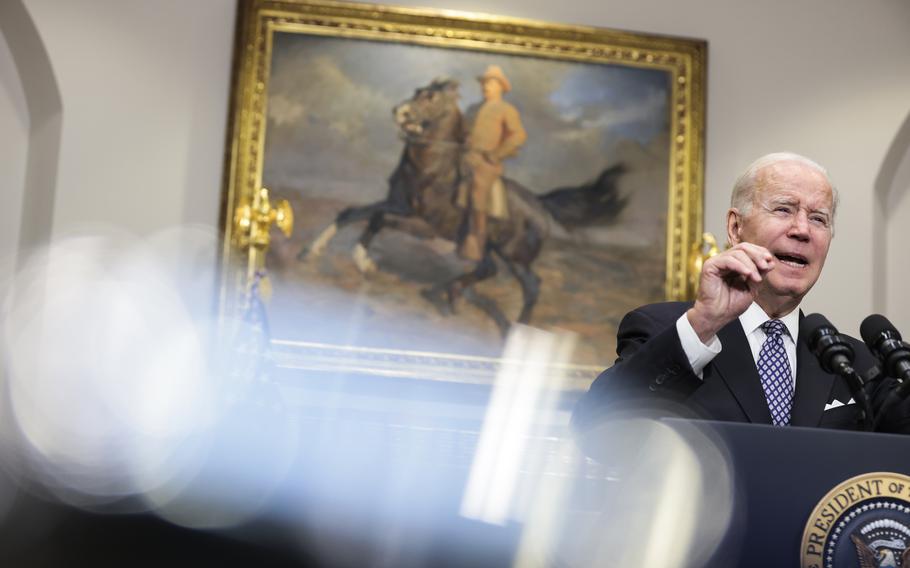 WASHINGTON — Before President Biden lambasted oil companies for excess profits last week and threatened to slap a “windfall tax” on them, several of his top energy advisers privately attempted to woo that same industry only to get rebuffed, according to seven people familiar with the matter who spoke on the condition of anonymity.

Officials from the White House and the State and Energy departments reached out to oil industry trade groups and companies in mid-October to get support for a plan to buy crude to refill the country’s emergency reserves. They told industry representatives their plan would help U.S. oil and gas companies by guaranteeing that the government would purchase oil in months to come if crude prices fell to about $70 a barrel or below.

It was the latest of several attempts by the Biden administration to prompt oil companies to boost output, this time by telling them they could invest with the confidence that the government would help ensure steady revenue. Officials including the National Economic Council director, Brian Deese, and Amos Hochstein, a special presidential coordinator at the State Department, called some of the world’s largest oil companies, including ExxonMobil, Chevron and Shell.

But none has endorsed the plan or committed to boosting output, a setback for an administration trying to lower energy prices going into an election and weaken the power of Russia as a major energy exporter. Instead of repairing relations with the U.S. oil industry, the outreach deepened a divide between the White House and executives who control U.S. oil output and have little trust that the president will back them.

Several industry officials said executives told administration officials that the logic of the plan wasn’t clear and that the effort was probably too small to work as the White House claimed. Some called the outreach a political ploy amid a series of comments from the president blaming the oil companies for record-high prices and castigating them for their historically high profits.

“We’ve been disappointed that the conversations of the last several weeks have been geared so much toward midterm politics,” said Chet Thompson, leader of the American Fuel and Petrochemical Manufacturers, the refiners’ trade group. “We’ll be happy after that to get back to serious energy policymaking.”

Biden announced the plan — along with more withdrawals from the Strategic Petroleum Reserve — from the White House on Oct. 19 and criticized oil companies in the same speech. He said they shouldn’t be delivering so much profit to shareholders “while a war is raging,” referring to Russia’s assault on Ukraine. Days later, shortly after other cordial, private talks between Energy Department officials and industry leaders, Biden accused oil companies of “war profiteering” as he raised the possibility of imposing a windfall tax.

The mistrust goes both ways, according to administration officials. John D. Podesta, a top climate adviser at the White House, said oil company executives are failing to show patriotism. They should be spending to boost production that might lower consumer prices, he said, at a time when Russia has used its power as one of the world’s top energy exporters to put pressure on NATO countries and to fund its war in Ukraine.

Instead, he said, they are heeding major shareholders who have demanded restraint and paying some of their huge profits back to those investors instead of spending on growth. It has irritated White House officials who want lower prices for consumers, and many of them passed around recent comments from ExxonMobil CEO Darren Woods that the company was helping “the American people” through “the form of our quarterly dividend.”

“Comments like that are just highly frustrating,” Podesta said. “The total lack of recognition of what is happening to families around the country.”

Woods’s comments on Oct. 28 were part of an ExxonMobil earnings call about its latest record profit, $19.7 billion. Chevron had just posted an $11.2 billion profit, its second highest on record. The size of the profits and the commitment to shareholders over consumers pushed Biden to his first public suggestion that he might support a windfall tax, the culmination of months of internal debates, administration officials said.

“It’s frustrating that a year ago we were being told to stop drilling, and in the past several months, we’ve been beat up for not drilling enough,” ExxonMobil spokesman Casey Norton said in a statement. “In actuality, we delivered record production from our US refineries so that we could do our part to help meet demand. Much of the profits were then handed back to our shareholders, 40% of whom are American families.”

Biden’s inner circle has been fixated on gasoline prices since last year, believing they’re pivotal to the president’s popularity and potentially Democrats’ success in Tuesday’s election. In a Friday speech outside San Diego, Biden suggested he would soon try to meet with oil company executives.

“Well, I’m working like hell to deal with the energy prices,” he said, according to a White House transcript. “I’m going to have a little, as they say, come-to-the-Lord talk with the oil companies pretty soon.”

At the center of last month’s offer was a plan to refill the U.S. Strategic Petroleum Reserve. The administration decided, over industry objections, to sell 180 million barrels of the government-owned oil starting in the spring to prevent soaring prices in the wake of Russia’s invasion of Ukraine. The reserve is now down to a little more than half of its 714-million-barrel capacity and will need to be at least partially refilled.

The White House announced in October it settled on a plan to buy crude when prices are at or below $67 to $72 per barrel. The rule is the first of its kind, enabling the Energy Department to enter fixed-price contracts with suppliers, paying in advance for future delivery, in 2024 or 2025 under the plan, the White House has said.

Podesta said the system could help prevent the type of plummeting prices that led to mass bankruptcies and pullbacks in the industry in recent years. That should remove the “excuse” that the industry can’t invest because of fears over potential supply gluts or weak long-term demand growth, he said.

Industry leaders said it’s unclear it would work that way. The program isn’t big enough or effective soon enough to change the broader dynamic in the industry, which is influenced by global factors and investors that have become aggressive about getting better returns, they said.

Administration officials also noted that it is common for any White House to reach out to stakeholders to ensure support for and the quality of any new program or rule. And some initially expected little commitment from oil companies because the firms have been slow or reluctant to make major changes in response to past administration requests.

Strained relations between the two sides go back to the administration’s earliest days. Industry executives have been frustrated that the White House has prioritized climate change, blocking the Keystone XL pipeline, limiting their access to federal land, and aggressively pushing for oil companies to shift their businesses to produce cleaner energy instead.

In recent months, industry relationships have improved with Energy Secretary Jennifer Granholm, who at times has struck a more conciliatory tone and whom some industry leaders have grown to consider an earnest dealmaker. But some still see White House officials, especially the economic adviser Deese, as quick to use their comments to attack them and to consider policies such as export bans that companies say would be harmful.

“When Deese joins the calls, it tends to be more of a lecture,” one lobbyist said.

“Brian Deese’s role is to support the President in building an economy that works for working families, and the American people deserve somebody who will stand up for them in his role,” White House spokesman Abdullah Hasan said in a statement. “Rigorously challenging the logic of oil companies making record profits at the expense of the American people isn’t ‘political,’ it’s what real public service is about.”

Talks have continued in the past two weeks even amid the president’s rhetoric. Some of Granholm’s top aides have been asking for guidance on what could boost inventories — especially of refined products such as diesel and gasoline. They fear a severe storm or other supply disruptions could cause major price increases because those inventories are so low, according to people familiar with the talks who spoke on the condition of anonymity to discuss private conversations.

Administration officials have stopped mentioning export bans or new mandates to refill low commercial inventories, the people said. While fall’s mild weather is likely to limit energy demand, they are urging companies to start getting inventories to healthy levels voluntarily.

Industry leaders have stressed that markets, left alone, will eventually produce solutions and refill inventories. Some have also pitched waivers of the Jones Act — which permits only U.S.-flagged vessels to complete maritime cargo transport between American ports — to lower costs for supplying to key storage sites, as well as waivers on sulfur limits in diesel fuel, policies that might hurt unions or worsen air quality, according to people familiar with the talks. Some in the administration are still planning to revisit new mandates to boost commercial inventory levels later if the industry doesn’t come through on its own, according to one of the people.