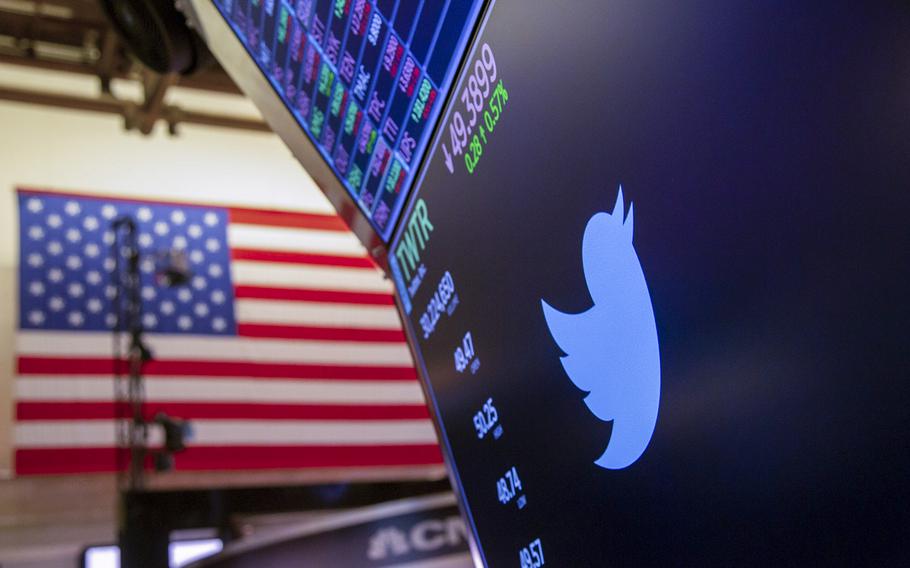 A monitor with Twitter Inc. signage on the floor of the New York Stock Exchange in New York on April 29, 2022. (Michael Nagle/Bloomberg )

Market skepticism surrounding Elon Musk's $44 billion buyout of Twitter is back amid concerns that the deal may come under government scrutiny.

The stock dropped 4.7% to $49.90, falling further away from the $54.20 offer and putting the deal's arbitrage spread at the widest level in one week. The move came after Bloomberg News reported that the Biden administration is mulling whether the U.S. should subject some of the billionaire's ventures, including the deal for the social media company, to national security reviews.

Although Twitter shares plunged as much as 16% in premarket trading, some of the losses were pared after a White House spokesperson said they were unaware of such discussions.

"The spread is widening because the market is confused about the latest conflicting headlines surrounding a possible national security review of the deal. Could a [national security] or similar review prompt Musk to once again try to delay or get out of the deal, or prompt the banks to pull financing?" said Frederic Boucher, a risk arbitrage analyst at Susquehanna International Group.

Boucher, however, thinks the scenario is unlikely. "I think the most probable event at this point is the deal closes next week. But this is Musk, and predicting his moves has been hazardous," he said. SFG is a market maker in the securities of Twitter SFG and/or its affiliates beneficially own 1% or more of the securities.

If the Committee on Foreign Investment in the United States, known as CFIUS, starts a national security review it would delay the deal, which likely wouldn't close before the end of this year, Lafitte added.

Twitter had inched closer to Musk's $54.20 a share offer price before the report, with Wall Street appearing increasingly confident that the deal would close. On Thursday, the arbitrage spread on the proposed takeover was at its narrowest since the deal was announced.

Both sides' bankers and lawyers are preparing paperwork for the buyout to be completed by the Oct. 28 court-issued deadline, according to people familiar with the matter.

Some are less worried about a review. "It does seem fanciful that the U.S. Government would view Twitter as a national security asset," Canaccord Genuity's Quest analyst Graham Simpson said in an email. Still, "the jury is still out" on the deal because of questions about Musk's ability to finance the deal after Tesla's share price halved this year, he said.

Cabot Henderson, a merger strategist at JonesTrading echoed a similar point. "This news is probably more of a warning shot after Musk's erratic behavior, and at around 90% implied probability here seems a clear buy, especially after continued reports that the deal close is proceeding apace. That said, there might be severe choppiness given the high profile and broad ownership of this name," he said.