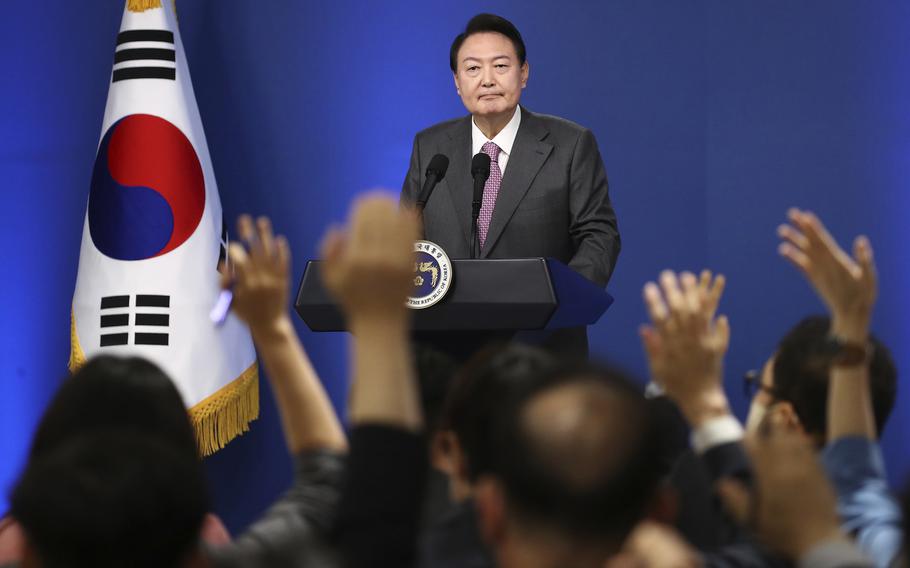 “What an embarrassment for Biden, if these idiots refuse to grant it in Congress,” video broadcast on South Korean television showed Yoon telling Foreign Minster Park Jin in New York. The comments were caught on a microphone as Yoon and Park were leaving a brief chat with Biden at a Global Fund event.

The two leaders had been scheduled to hold formal discussions on the sidelines of the UN General Assembly this week and instead had a chat at the event for the charity that raises money to fight infectious diseases.

A senior South Korean presidential office official told reporters in New York that Yoon’s comments were unofficial and unverified. The official said it was inappropriate to view such private remarks as a reflection on the administration’s diplomatic achievements.

The White House said in a statement that Biden and Yoon discussed cooperation on the security threat posed by North Korea as part of a “broad range of priority issues including supply chain resilience, critical technologies, economic and energy security, global health and climate change.”

Yoon has come under pressure at home to remedy provisions in the Inflation Reduction Act signed last month by Biden, which includes tax credits of as much as $7,500 for purchases of electric vehicles made in North America. That could disadvantage major South Korean brands like Hyundai and Kia, which don’t yet have operational EV plants in the U.S.

The off-the-cuff comments from Yoon were met with derision from opposition South Korean lawmakers, who said they tarnished the country’s image.

The president has already faced criticism for shunning an in-person meeting with House Speaker Nancy Pelosi when she visited South Korea last month, when he was on vacation. The lawmakers said he missed a chance to lobby on his country’s behalf over the legislation.