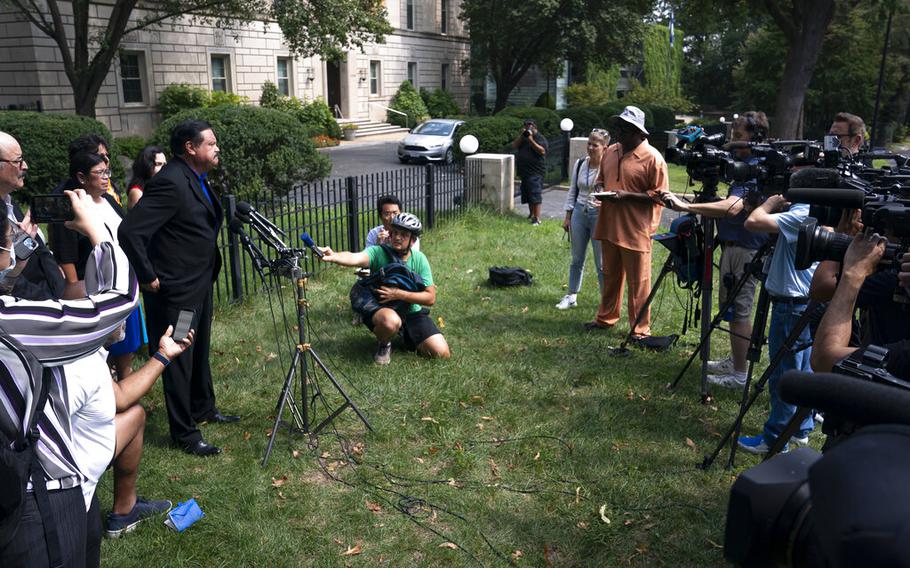 Domingo Garcia, the national president of the League of United Latin American Citizens, speaks about migrants who were transported by bus from the U.S.-Mexico border and dropped off near Vice President Kamala Harris’ home in residential Washington, Thursday, Sept. 15, 2022. (Nathan Howard/AP)

WASHINGTON — Two busloads of migrants from the U.S.-Mexico border were dropped off near Vice President Kamala Harris’ home in residential Washington on Thursday morning in the bitter political battle over the Biden administration’s immigration policies.

Texas Gov. Greg Abbott has been busing migrants out of Texas to cities with Democratic mayors as part of a political strategy this year because he says there are too many arrivals over the border to his state. Arizona Gov. Doug Ducey also has adopted this policy, and Florida Gov. Ron DeSantis also got in on the act recently. It was first dreamed up by former President Donald Trump.

Abbott tweeted that he’d sent the buses that arrived Thursday: “We’re sending migrants to her backyard to call on the Biden Administration to do its job & secure the border.”

About two dozen men and women stood outside the U.S. Naval Observatory at dawn, clutching clear plastic bags of their belongings carried with them over the border, before moving to a nearby church. Harris’ office had no immediate comment.

The steady flow of migrant buses has caused a scramble in Washington, with Mayor Muriel Bowser calling for federal intervention and a coalition of NGOs forming to handle the new arrivals, backed by a grant from the Federal Emergency Management Agency.

This coalition has become accustomed to wildly divergent levels of coordination between the Texas and Arizona buses.

Tatiana Laborde, managing director of the international relief agency SAMU First Response, said the buses from Arizona come with detailed manifests of passengers and their nationalities, coordination on arrival times and medical personnel aboard each bus.

In contrast, she said, the Texas buses arrived chaotically. They only hear from charitable groups on the Texas end that a bus carrying a certain number of people has departed. At some point about 48 hours later, that bus drops off riders at Washington’s Union Station.

Thursday morning’s surprise drop-off outside Harris’ residence suggests governors like Abbott were looking for creative new ways to make their political point — with the District of Columbia as the playing field. Vice President Kamala Harris listens during a meeting with civil rights and reproductive rights leaders in the Diplomatic Reception Room on the White House complex in Washington, Sept. 12, 2022. Two buses of migrants from the U.S.-Mexico border were dropped off near Harris’ home in residential Washington on Thursday, Sept. 15, 2022. (Susan Walsh/AP)

Speaking to reporters outside Harris’ residence, Garcia said the two busloads of migrants from Texas were “dumped like human garbage” in Washington on Thursday. He also said many of the migrants were being “tricked into signing these releases,” – something both the Texas and Arizona governments have denied.

He also called for both Republican and Democratic politicians to come together around, “a bipartisan solution to fixing our broken immigration system. I agree that it’s broken.”

After migrants seeking asylum cross the U.S.-Mexico border, they spend time in a U.S. Customs and Border Protection facility along the border until they are generally released into the U.S. to wait out their cases. Republicans say Biden’s policies encourage migrants to vanish into the U.S.; Democrats argue the Trump-era policy of forcing migrants to wait out their asylum cases in Mexico was inhumane.

DeSantis flew two planes of immigrants to Martha’s Vineyard on Wednesday. And last week, Abbott sent about 75 migrants to Chicago.

Bowser has requested a National Guard deployment but was rejected by the Pentagon; the deployment was opposed by the NGOs, who called it an unnecessary militarization of a humanitarian issue.

Last week, Bowser declared a limited state of public emergency over the migrant issue and proposed forming a new Office of Migrant Services with $10 million in funding. The proposal comes before the D.C. Council next week.