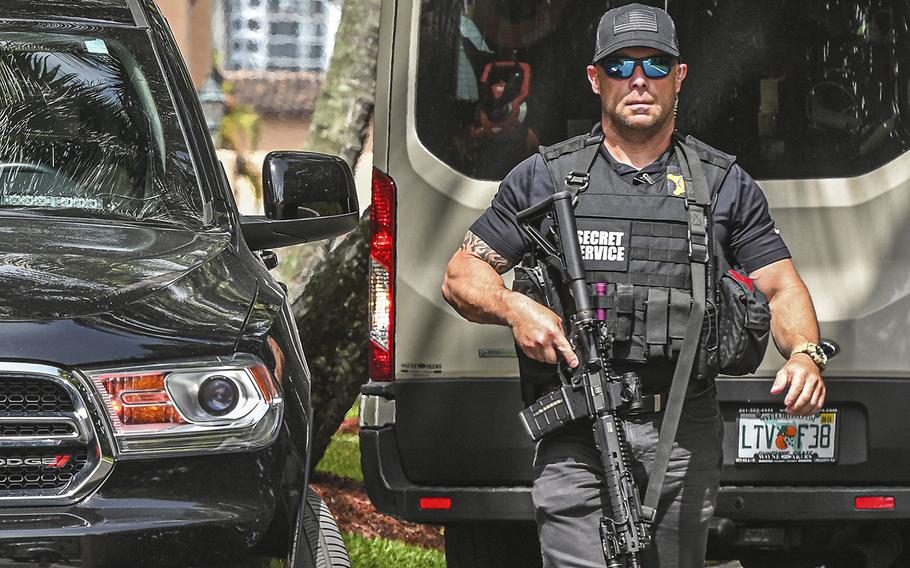 A member of the Secret Service is seen in front of the home of former President Donald Trump at Mar-A-Lago in Palm Beach, Florida, on Aug. 9, 2022. (Giorgio Viera/AFP/Getty Images/TNS)

(Tribune News Service) — Portions of the FBI affidavit used to secure a search warrant for former President Donald Trump's Mar-a-Lago estate should be unsealed, a federal judge in Florida said.

U.S. Magistrate Judge Bruce Reinhart on Thursday gave the Justice Department one week to propose what information in the document should be kept secret.

"I'm not prepared to find that the affidavit should be fully sealed," Reinhart said during a hearing in West Palm Beach on a request from news media organizations and others to publicly release the affidavit.

Reinhart made the remarks moments after Jay Bratt, the Justice Department's counterintelligence chief, told him that the ongoing investigation would be "severely compromised" if the affidavit is released, adding that a line-by-line redaction of the document was unrealistic.

Bratt said the investigation is in the "very early stages" and that the affidavit is very detailed, "lengthy" and "suggest next legislative steps." He said the DOJ is concerned that its release will identify names of agents and identities of witnesses.

The judge said the government is free to propose that everything be redacted but he is unlikely to agree. He said he will propose his own redactions if he disagrees with DOJ's proposals.

The Justice Department and Trump agreed last week to release the warrant and other documents that described the items seized during the Aug. 8 search as well as the laws that may have been violated. But the government said the more-detailed affidavit contains information, especially about witnesses, that needs to be protected while the investigation is ongoing.

Trump, who claims the search was politically motivated and unnecessary, did not file a motion seeking to unseal the affidavit, despite saying in public statements that the judge should do so.

One of Trump's attorneys, Christina Bobb, attended the court hearing Thursday and declined to comment other than to say Trump wants the affidavit unsealed.

Reinhart's comments on Thursday came in the first public hearing stemming from the unprecedented search of a former president's residence, from which Federal Bureau of Investigation agents took 11 sets of classified documents.

Media outlets and others sought to intervene in the case, arguing that high public interest in the unprecedented search of a former president's home warranted the release of the affidavit.

A substantial release of the FBI's affidavit be highly unusual disclosure of a document normally revealed only if criminal charges are filed. The Justice Department's decision to request the release of the warrant itself was already seen as a major departure from normal procedure.

The affidavit — typically a detailed explanation of an ongoing probe — would likely shed more light on why Reinhart approved the politically explosive search less than three months before the mid-term elections. Trump and his allies have fiercely attacked the judge, FBI and Justice Department over the search.

The Justice Department argued in an Aug. 15 court filing that keeping the affidavit sealed would "protect the integrity of an ongoing law enforcement investigation that implicates national security." Unsealing the affidavit could also reveal "highly sensitive information" about witnesses, the government said.

Some Republican lawmakers had also called for the release of the document while Senate Intelligence Committee leaders made a bipartisan request to the government for members to privately access the classified documents.