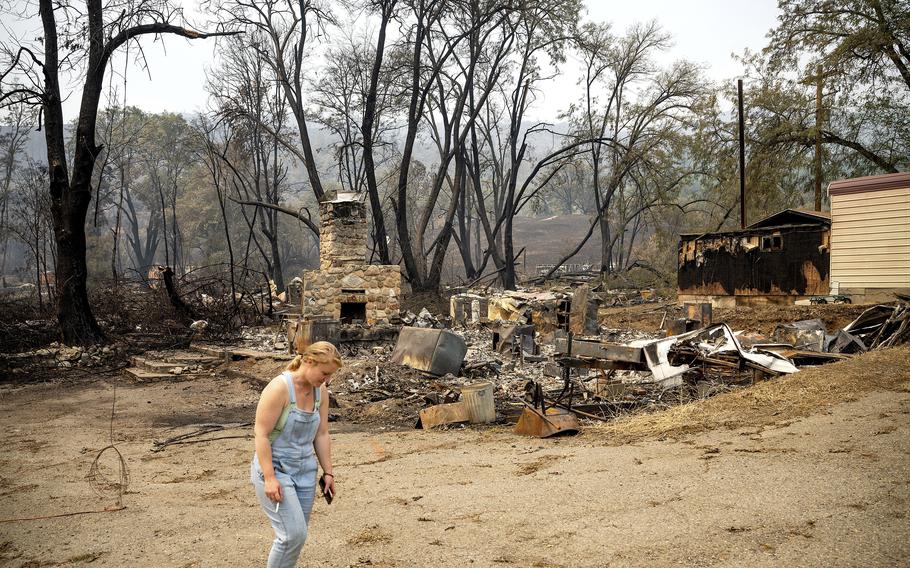 KLAMATH RIVER, Calif. — A week ago, the scenic Northern California hamlet of Klamath River was home to about 200 people and had a community center, post office and a corner grocery store. Now, after a wildfire raged through the forested region near the Oregon state line, four people are dead and the store is among the few buildings not reduced to ashes.

At an evacuation center Wednesday, Bill Simms said that three of the four victims were his neighbors. Two were a married couple who lived up the road.

"I don't get emotional about stuff and material things," Simms said. "But when you hear my next-door neighbors died ... that gets a little emotional."

The 65-year-old retiree bought his property six years ago as a second home with access to hunting and fishing. He said Klamath River is a place people are attracted to because they can have privacy and enjoy nature.

He went back to check on his property Tuesday and found it was destroyed.

"The house, the guest house and the RV were gone. It's just wasteland, devastation," Simms said. He found the body of one of his two cats, which he buried. The other cat is still missing. He was able to take his two dogs with him to the shelter.

The McKinney Fire broke out Friday and was still out of control on Wednesday, despite progress by firefighters who took advantage of rain from thunderstorms and lower temperatures.

But even the welcome precipitation brought problems. On Tuesday, heavy rain swelled rivers and creeks and a private contractor in a pickup truck who was aiding the firefighting effort was hurt when a bridge gave out and washed away the vehicle, said Courtney Kreider, a spokesperson with the Siskiyou County Sheriff's Office. The contractor was hospitalized with non-life-threatening injuries, she said.

More than 100 buildings ranging from homes to sheds have burned. Identifying the four people who were killed could take several days, Kreider said.

The fire has charred nearly 90 square miles and is the largest in California so far this year. The cause is unknown.

With the rain and cooler temperatures, the blaze grew very little and fire officials said crews used bulldozers to carve firebreaks along a ridge to protect homes and buildings in and around Yreka, which has about 7,800 residents and is the largest city in Siskiyou County.

On Wednesday, evacuation orders for residents of Yreka and Hawkinsville were downgraded to warnings, allowing people to return home. But they were warned the fire remains a threat and were urged to be ready to flee again if necessary.

Skies were mostly clear on Wednesday and temperatures were in the mid- to high 90s, baking an already parched landscape.

California and much of the rest of the West is in drought and wildfire danger is high, with the historically worst of the fire season still to come. Fires are burning in Montana, Idaho and Nebraska and have destroyed homes and threaten communities.

Scientists say climate change has made the West warmer and drier over the last three decades and will continue to make weather more extreme and wildfires more frequent and destructive. California has seen its largest, most destructive and deadliest wildfires in the last five years. In 2018, a massive blaze in the Sierra Nevada foothills destroyed much of the city of Paradise and killed 85 people, the most deaths from a U.S. wildfire in a century.

When it began, the McKinney Fire burned just several hundred acres and firefighters thought they would quickly bring it under control. But thunderstorms came in with ferocious wind gusts that within hours had pushed it into an unstoppable conflagration.

Roger Derry, 80, and his son, Rodger, were among the few families from Klamath River whose homes were spared by the inferno. The elder Derry, who has lived in the unincorporated town for more than four decades, said the fire was terrifying.

"When that fire came over that ridgeline, it had 100-foot flames for about 5 miles and the wind was blowing. It was coming down like a solid blowtorch," he said. "There was nothing to stop it."

Harlene Schwander, 82, lost the home she had just moved into a month ago to be closer to her son and daughter-in-law. Their home survived but her house was torched.

Schwander, an artist, said she only managed to grab a few family photos and some jewelry before evacuating. Everything else — including her art collection, went up in flames.

"I'm sad. Everybody says it was just stuff, but it was all I had," she said.

In northwestern Montana, a fire that has destroyed at least four homes and forced the evacuation of about 150 residences west of Flathead Lake continued to be pushed north by winds on Wednesday, fire officials said.

Crews had to be pulled off the lines on Wednesday afternoon due to increased fire activity, Sara Rouse, a public information officer, told NBC Montana.

There were concerns the fire could reach Lake Mary Ronan by Wednesday evening, officials said.

The fire, which started on July 29 in grass on the Flathead Indian Reservation, quickly moved into timber and had charred nearly 29 square miles.

The Moose Fire in Idaho has burned more than 85 square miles in the Salmon-Challis National Forest while threatening homes, mining operations and fisheries near the town of Salmon. And a wildfire in northwestern Nebraska led to evacuations and destroyed or damaged several homes near the small city of Gering. The Carter Canyon Fire began Saturday as two separate fires that merged.