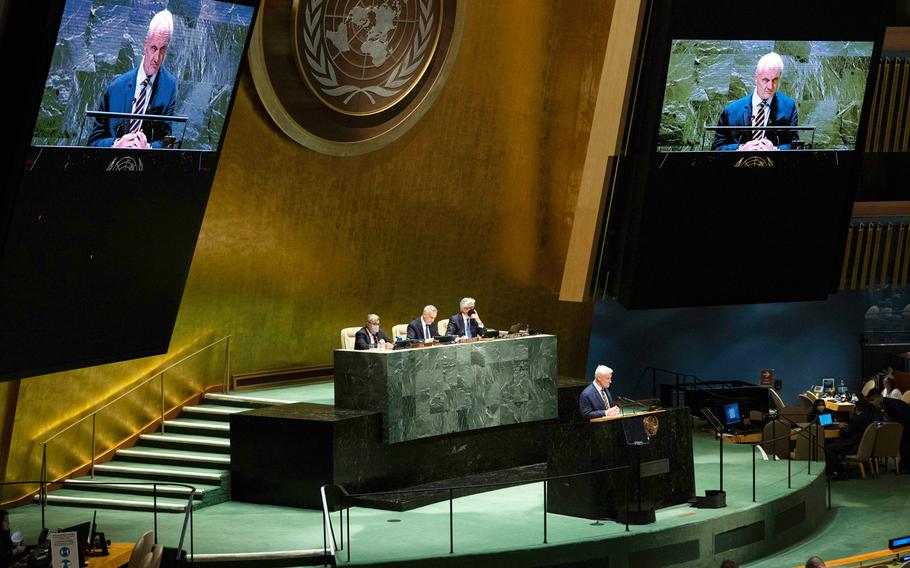 UNITED NATIONS — A Russian official on Tuesday twice repeated President Vladimir Putin’s new message that “a nuclear war cannot be won and must never be fought,” apparently trying to roll back on Putin’s warning after the Ukraine invasion that Russia is a “potent" nuclear power and any attempt to interfere would lead to “consequences you have never seen.”

Igor Vishnevetsky, deputy director of the Russian Foreign Ministry’s nonproliferation and arms control program, started his country’s address to the pandemic-delayed conference to review the 50-year-old Nuclear Nonproliferation Treaty by reading Putin’s message to participants against a nuclear war. And he repeated the same words later.

What impact Putin's new commitment has remains to be seen.

Ukrainian Deputy Foreign Minister Mykola Tochytskyi told Monday's high-level meeting that Putin's open threat to the world on Russia's ability to use nuclear weapons had been backed by “clear calls to do so by the Russian state media."

“Think tanks and experts widely argue on what type of nuclear weapons — tactical or strategic — Russia will use during the ongoing war against Ukraine," he said. “This is the background for our NPT review conference."

Russia “has been subjected to a hybrid military campaign fraught with a slide into a direct armed conflict between nuclear powers,” he said. “Moreover, the arms control system, which has traditionally been a core pillar of international security and stability, is currently facing a crisis that has no precedent in recent history in terms of its scale.”

Vishnevetsky made no mention of Putin’s warning and action after invading Ukraine, but he said given the current situation “it is more critical than ever that the nuclear powers behave with restraint and responsibility.”

He noted that in a joint statement in January the five nuclear powers — Russia, United States, China, Britain and France — reiterated that a nuclear war should never be fought and can’t be won and emphasized “the need to prevent not only a nuclear confrontation but also any military confrontation between nuclear powers.”

“It is imperative that all signatories demonstrate in deeds their commitment to these provisions,” the Russian official said.

The review conference, which ends Aug. 26, is aimed at strengthening the NPT, which is considered the cornerstone of international disarmament efforts. Its goal is to prevent the spread of nuclear weapons and eventually achieve a nuclear-free world, and it has the widest support of any arms control agreement, with 191 parties to the treaty.

Under the NPT’s provisions, the five original nuclear powers agreed to negotiate toward eliminating their arsenals someday and nations without nuclear weapons promised not to acquire them in exchange for a guarantee to be able to develop nuclear energy for peaceful purposes.

Chinese Ambassador Fu Cong, head of the Foreign Ministry’s arms control department, whose country has close ties to Russia, told delegates Tuesday that “the NPT is significantly strained and even faces new and the most severe challenges since the end of the Cold War.”

“The specter of Cold War mentality is there to stay,” he said, pointing to a deteriorating global strategic security environment, “the outdated approach to security based on military alliances” and the growing risk of an arms race and conflicts.

Fu called for the five nuclear powers “to work together to reduce nuclear risks,” strengthen communications on strategic stability “and conduct in-depth dialogue on reducing the role of nuclear weapons in their national security doctrines and on a broad range of issues including missile defense, outer space, cyberspace, and artificial intelligence.”

Blinken, America’s top diplomat, said Monday that the U.S. chose “to act with restraint” in response to Russia’s actions and avoid anything that could unintentionally raise nuclear tensions. As examples, he said the U.S. abandoned previously scheduled tests of intercontinental ballistic missiles and did not raise the alert status of its nuclear forces “in response to Russia’s saber-rattling.”

U.N. Secretary-General Antonio Guterres sounded the alarm at Monday’s opening over the war in Ukraine, nuclear threats in Asia and the Middle East, and other tensions, warning that “humanity is just one misunderstanding, one miscalculation away from nuclear annihilation.”

Blinken said the U.S., United Kingdom and France have released a set of principles and best practices that all NPT nuclear weapon states should adhere to, “among them that every effort has to be made to ensure that nuclear weapons are not used again.”