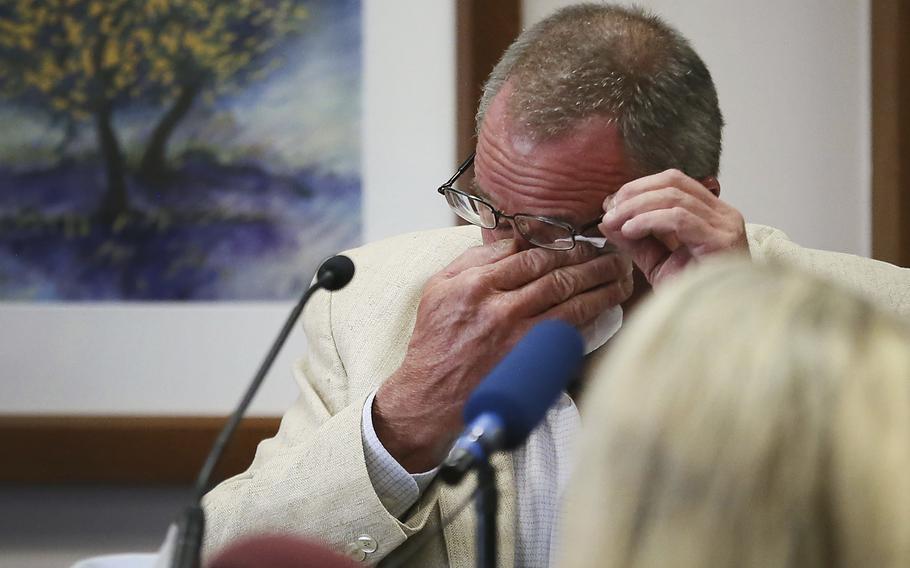 AUSTIN, Texas — Fighting back tears and finally given the chance to confront conspiracy theorist Alex Jones, the parents of a 6-year-old killed in the 2012 Sandy Hook Elementary school shooting described being put through a “living hell” of death threats, harassment and ongoing trauma over the last decade caused by Jones using his media platforms to push claims that it was all a hoax.

The parents led a day of charged testimony that included the judge scolding the bombastic Jones for not being truthful with some of what he said under oath.

Neil Heslin and Scarlett Lewis, whose son Jesse was killed at Sandy Hook, took the witness stand Tuesday on the final day of testimony in the two-week defamation damages trial against Jones and his media company Free Speech Systems. They are seeking at least $150 million damages.

In a gripping exchange, Lewis spoke directly to Jones, who was sitting about 10 feet away. Earlier that day, Jones was on his broadcast program telling his audience that Heslin is “slow” and being manipulated by bad people.

“I am a mother first and foremost and I know you are a father. My son existed,” Lewis said to Jones. “I am not deep state... I know you know that... And yet you’re going to leave this courthouse and say it again on your show.”

At one point, Lewis asked Jones: “Do you think I’m an actor?”

“No, I don’t think you’re an actor,” Jones responded before the judge admonished him to be quiet until called to testify.

Lewis continued trying to impress on Jones that the Sandy Hook shooting and trauma inflicted in the decade since then was real.

“It seems so incredible to me that we have to do this — that we have to implore you, to punish you — to get you to stop lying,” Lewis said. “I am so glad this day is here. I’m actually relieved. And grateful... that I got to say all this to you.”

Jones visibly shook his head several times while Scarlett Lewis was addressing him.

Heslin and Lewis are among several Sandy Hook families who have filed several lawsuits alleging that Sandy Hook hoax claims pushed by Jones have led to years of abuse by Jones and his followers.

Heslin and Lewis both said they fear for their lives and have been confronted by strangers at home and on the street. Heslin said his home and car have been shot at. The jury heard a death threat sent via telephone message to another Sandy Hook family.

“I can’t even describe the last nine and a half years, the living hell that I and others have had to endure because of the recklessness and negligence of Alex Jones,” Heslin said.

“It’s fear for your life,” Scarlett Lewis said. “You don’t know what they were going to do.”

Heslin said he didn’t know if the Sandy Hook hoax conspiracy theory originated with Jones, but it was Jones who “lit the match and started the fire” with an online platform and broadcast that reached millions worldwide.

“What was said about me and Sandy Hook itself resonates around the world,” Heslin said. “As time went on, I truly realized how dangerous it was.”

Jones skipped Heslin’s morning testimony while he was on his show — a move Heslin dismissed as “cowardly” — but arrived in the courtroom for part of Scarlett Lewis’ testimony. He was accompanied by several private security guards.

“Today is very important to me and it’s been a long time coming... to face Alex Jones for what he said and did to me. To restore the honor and legacy of my son,” Heslin said when Jones wasn’t there.

Heslin told the jury about holding his son with a bullet hole through his head, even describing the extent of the damage to his son’s body. A key segment of the case is a 2017 Infowars broadcast that said Heslin didn’t hold his son.

The jury was shown a school picture of a smiling Jesse taken two weeks before he was killed. The parents didn’t receive the photo until after the shooting. They described how Jesse was known for telling classmates to “run!” which likely saved lives.

An apology from Jones wouldn’t be good enough, the parents said.

Jones later took the stand himself, initially being combative with the judge who had asked him to answer his own attorney's question. Jones testified he had long wanted to apologize to the plaintiffs.

“I never intentionally tried to hurt you. I never said your name until this came to court," Jones said. "The internet had questions, I had questions.”

Later, the judge sent the jury out of the room and strongly scolded Jones for telling the jury he complied with pretrial evidence gathering even though he didn’t, and that he is bankrupt, which has not been determined. Plaintiff’s attorneys were furious about Jones mentioning he is bankrupt, which they worry will taint a jury decision about damages.

“This is not your show,” Judge Maya Guerra Gamble told Jones. “Your beliefs do not make something true. You are under oath.”

Last September, Guerra admonished Jones in her default judgement over his failure to turn over documents requested by the Sandy Hook families. A court in Connecticut issued a similar default judgement against Jones for the same reasons in a separate lawsuit brought by other Sandy Hook parents.

Heslin and Lewis suffer from a form of post-traumatic stress disorder that comes from constant trauma, similar to that endured by soldiers in war zones or child abuse victims, a forensic psychologist who studied their cases and met with them testified Monday.

Jones has portrayed the lawsuit against him as an attack on his First Amendment rights.

At stake in the trial is how much Jones will pay. The parents have asked the jury to award $150 million in compensation for defamation and intentional infliction of emotional distress. The jury will then consider whether Jones and his company will pay punitive damages.

The trial is just one of several Jones faces.

Courts in Texas and Connecticut have already found Jones liable for defamation for his portrayal of the Sandy Hook massacre as a hoax. In both states, judges issued default judgements against Jones without trials because he failed to respond to court orders and turn over documents.

Jones has already tried to protect Free Speech Systems financially. The company filed for federal bankruptcy protection last week. Sandy Hook families have separately sued Jones over his financial claims, arguing that the company is trying to protect millions owned by Jones and his family through shell entities.