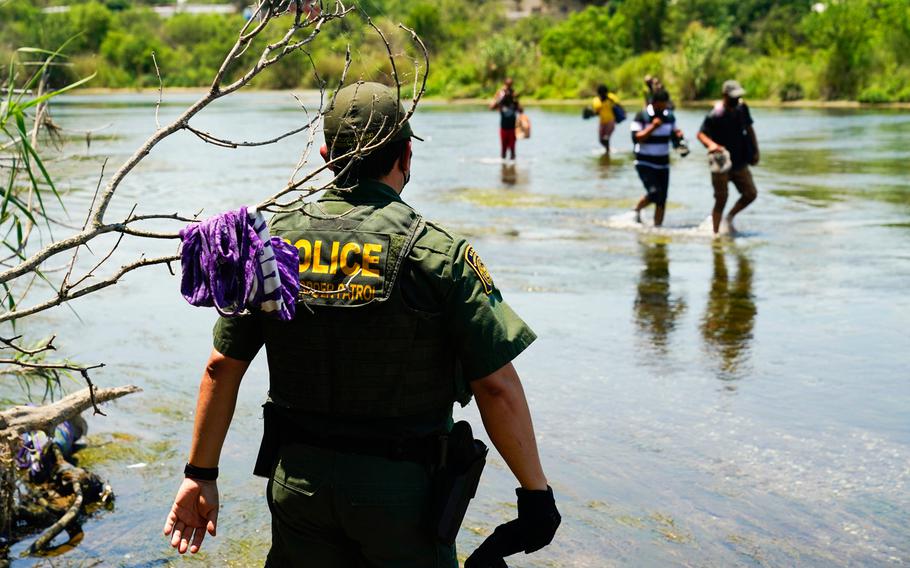 A Border Patrol agent watches as a group of migrants walk across the Rio Grande on their way to turn themselves in upon crossing the U.S.-Mexico border in Del Rio, Texas. (Eric Gay/AP)

SAN DIEGO — The Supreme Court on Monday certified its month-old ruling allowing the Biden administration to end a cornerstone Trump-era border policy to make asylum-seekers wait in Mexico for hearings in U.S. immigration court, a pro forma act that has drawn attention amid near-total silence from the White House about when, how and even whether it will dismantle the policy.

The two-word docket entry read “judgment issued” to record that justices voted 5-4 in a ruling issued June 30 that the administration could scrap the “Remain in Mexico” policy, overruling a lower court that forced the policy to be reinstated in December.

Homeland Security Secretary Alejandro Mayorkas said shortly after the Supreme Court victory that justices would need to communicate the decision to a lower court, which, in turn, should lift the order to keep the policy in place in a lawsuit filed by the state of Texas. Beyond that, administration officials have said little, including whether any of the thousands subject to the policy since December will be allowed to enter and remain in the United States while their cases are being considered in immigration court.

About 70,000 migrants were subject to the policy, known officially as “Migrant Protection Protocols,” or MPP, from when former President Donald Trump introduced it in January 2019 until President Joe Biden suspended it on his first day in office in January 2021, fulfilling a campaign promise. Many were allowed to return to the United States to pursue their cases during the early months of Biden's presidency.

Nearly 5,800 people have been subject to the policy from December through June, according to figures released Friday, a modest number that would make any reluctance to end it seem less plausible. Nicaraguans account for the largest number, with others from Cuba, Colombia and Venezuela.

A sign posted last week at the entrance to the Salvation Army migrant shelter in Tijuana, Mexico, by the United Nations' International Organization for Migration appeared to best capture the public understanding of the policy's status: “Wait for official information! The Remain in Mexico (MPP) program remains in effect. The United States government will inform you of any changes.”

Critics of the policy have been increasingly outspoken about the Biden administration's reticence on “Remain in Mexico,” and Monday's certification renewed their calls for an immediate end to the policy.

The final move may rest with U.S. District Judge Matthew Kacsmaryk in Amarillo, Texas, a Trump appointee whose ruling last year brought “Remain in Mexico” back.