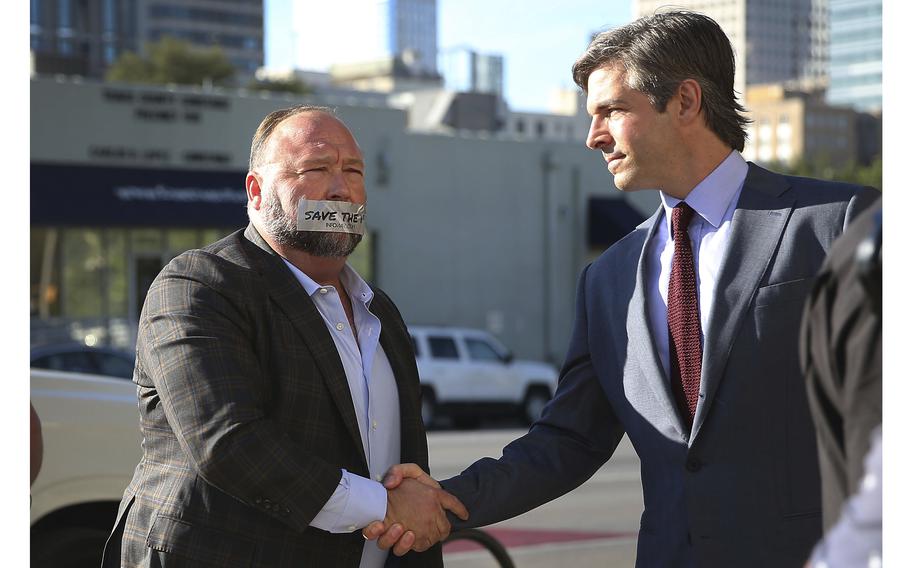 Alex Jones shakes hands with his lawyer, Andino Reynal, as he arrives at the Travis County Courthouse in Austin, Texas, July 26, 2022, with a piece of tape over his mouth that reads “save the 1st.” (Briana Sanchez, Austin American-Statesman via AP, Pool)

AUSTIN, Texas — The parents of a Sandy Hook Elementary School shooting victim live with a complex form of post-traumatic stress disorder and a constant fear that followers of conspiracy theorist Alex Jones will kill them, a psychiatrist testified Monday at Jones' defamation trial.

Neil Heslin and Scarlett Lewis, the parents of 6-year-old Jesse Lewis, have sued Jones and his media company Free Speech Systems over the harassment and threats they and other parents say they've endured for years while Jones and his Infowars website claimed the 2012 attack that killed 20 first-graders and six school staffers was a hoax or faked.

"The overwhelming cause of their pain is what Jones is doing," said Roy Lubit, a forensic psychiatrist hired by the plaintiffs to review the trauma faced by the parents.

The post-traumatic stress disorder the parents suffer from is not based on a single event, but on constant trauma, and is similar to that endured by soldiers in war zones or child abuse victims, Lubit said.

Heslin and Scarlett Lewis are consumed not just with the memory of their son's horrific death, but the denials and attacks on them and their son's legacy they've endured for years. He noted the security the parents hired to protect them at the two-week trial.

Lubit said Heslin has had guns fired at his home and has been accosted on the street. Scarlett Lewis told Lubit that she installed sophisticated surveillance equipment at her home and sleeps with a gun, a knife and pepper spray at her bedside.

Jones' attorney Andino Reynal tried to attack the credibility of Lubit's testimony and whether he is biased in favor of the parents, who are seeking at least $150 million in the case. He noted that Lubit briefly ran for Congress in Connecticut as a Democrat in 2018.

"You don't like Alex Jones, do you?" Reynal asked.

Mark Bankston, attorney for Heslin and Lewis, said the family has gone into isolation under a "large and professional security team" because of an incident that happened since the trial began. He did not provide details of what happened.

"They are in isolation and they are going to stay that way, and all I can tell you is they are terrified right now," Bankston said.

Heslin and Lewis have have attended almost all of the trial since opening statements on July 26, and first arrived at the courthouse with a small security detail. They left the courtroom together Monday morning.

Michael Crouch, a Connecticut psychologist who has treated Heslin and Stewart, said the lies about a Sandy Hook hoax stole precious memories of their son.

"If Alex Jones, if he was spreading the belief, the lies, that Neil's an actor, that means Jesse doesn't exist. Which is crazy," Crouch said. "You're taking away what they know of their son, what they want to hold on to."

Heslin and Lewis are expected to testify Tuesday as the final witnesses for their side.

Reynal said Jones will testify Tuesday in his own defense.

Monday's testimony also included videotaped depositions from an Infowars reporter who said that at the website, there was no fact-checking, source-vetting, verifying information through second sources or training about journalistic standards.

Jones, who has attended only some of the trial, was not in the courtroom for Monday morning's testimony.

The trial is in Texas because Jones lives in Austin and his media company, Free Speech Systems, is based there. The company filed for federal bankruptcy protection, though defense attorneys say that should not disrupt the trial, which is in its second week.

Free Speech Systems, which operates Infowars, listed $14.3 million in assets. That includes almost $1.16 million in cash and almost $1.6 million in property and equipment, as of May 31.

It also listed $79 million in liabilities, with a $54 million debt owed to PQPR Holdings.

Sandy Hook families have separately sued Jones over the $54 million debt listing, arguing that PQBR is a Nevada-registered company owned by Jones and his family through shell entities. That lawsuit in state court is still pending.

Courts in Texas and Connecticut have already found Jones liable for defamation for his portrayal of the Sandy Hook massacre as a hoax involving actors aimed at increasing gun control. In both states, judges issued default judgements against Jones without trials because he failed to respond to court orders and turn over documents.