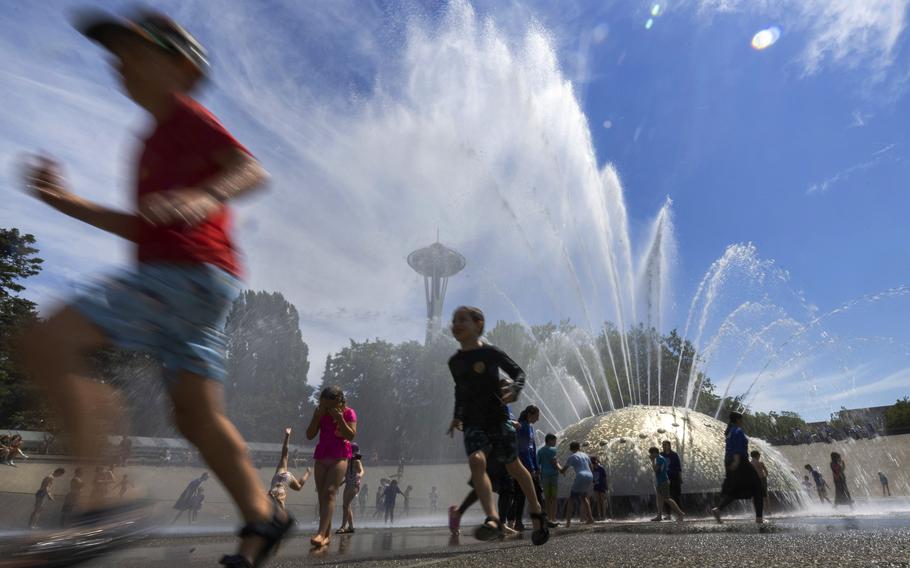 The International Fountain at Seattle Center is packed with children as they run from the water that is showering on them Wednesday, July 27, 2022 in Seattle. (Ellen M. Banner)

In Seattle, the temperature rose to 91 Fahrenheit by early afternoon, the record sixth straight day the mercury rose above 90 F. In Portland, Oregon, on Sunday temperatures rose above 95 F for the seventh day in a row, a record for the city for consecutive days above that mark.

In Oregon, the state Medical Examiner's Office said Sunday it was investigating 10 deaths as possibly heat related. In the Portland area temperatures have risen above 100 F several times over the past week.

Officials in Portland said they would keep cooling shelters open through Sunday night.

The National Weather Service issued an excessive heat warning for both the Portland and Seattle, Washington, regions lasting through late Sunday evening. Temperatures were expected to cool beginning Monday as colder air from the Pacific blows in.

Climate change is fueling longer heat waves in the Pacific Northwest, a region where weeklong heat spells were historically rare, according to climate experts.

Residents and officials in the Northwest have been trying to adjust to the likely reality of longer, hotter heat waves following last summer's deadly "heat dome" weather phenomenon that prompted record temperatures and deaths.

About 800 people died in Oregon, Washington, and British Columbia during that heat wave, which hit in late June and early July of 2021. The temperature hit an all-time high of 116 F in Portland.