Russian charged with using US groups to spread propaganda 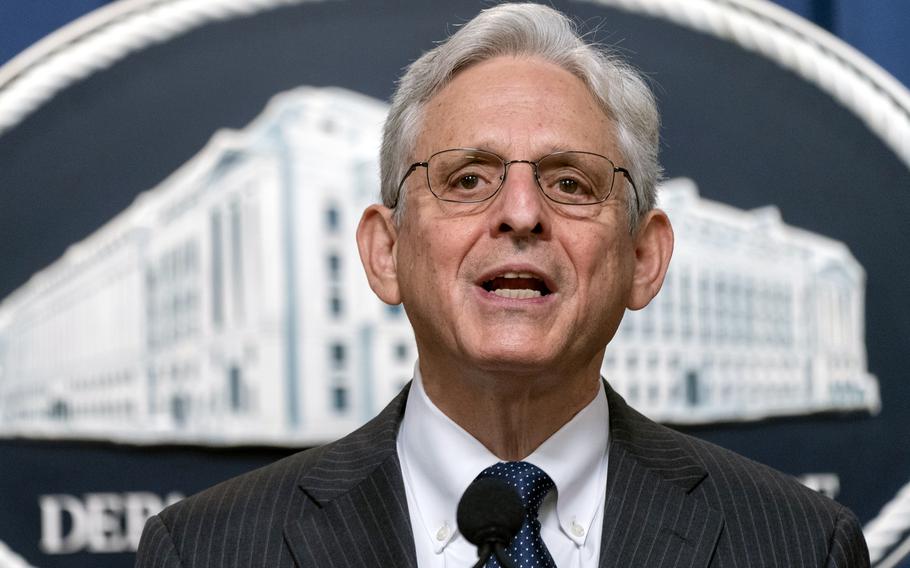 Attorney General Merrick Garland speaks during a news conference at the Department of Justice, June 13, 2022 in Washington. The Justice Department says a Russian operative has been charged with using political groups in the United States to advance pro-Russia propaganda. Aleksandr Viktorovich Ionov is charged in federal court in Florida with conspiring to have U.S. citizens act as illegal agents of the Russian government. (Jacquelyn Martin/AP)

WASHINGTON — A Russian operative under the supervision of one of the Kremlin's main intelligence services has been charged with recruiting political groups in the United States to advance pro-Russia propaganda, including during the invasion of Ukraine, the Justice Department said Friday.

The indictment of Aleksandr Viktorovich Ionov reflects what U.S. officials say are ongoing Russian government efforts to meddle in the American political process, to shape public opinion and to sow discord and dissent on hot-button social issues.

In this case, the authorities say, Ionov for roughly the last decade recruited political groups in Florida, Georgia and California and directed them to spread pro-Russia talking points. He also paid for group members to attend government-funded conferences in Russia, as well as a protest in the U.S. against social media efforts to suppress online support for Moscow's Ukraine invasion, the indictment says.

Ionov worked under the supervision of the Russia’s Federal Security Service, or FSB — which conducts domestic intelligence and counterintelligence activities — and reported his activities back to contacts in the agency, prosecutors say. He is the founder and president of the Anti-Globalization Movement of Russia, a Moscow-based group that prosecutors say is funded by the Russian government and that advocates for a fully sovereign Russia.

The indictment, in federal court in Tampa, charges him with conspiring to have U.S. citizens act as illegal agents of the Russian government. It was not immediately clear if he had a lawyer who could speak on his behalf.

Ionov is not currently in custody and appears unlikely to ever stand trial in the U.S., but the indictment is nonetheless intended to warn Americans about the reach of foreign influence operations and to send a signal to Russia that the U.S. government is aware of its actions.

Separately on Friday, the Treasury Department imposed sanctions on Ionov, accusing him of efforts to “manipulate and destabilize the United States and its allies and partners.”

The indictment does not identify by name any of the organizations Ionov recruited, but it does describe one of them as a St. Petersburg, Florida group whose leaders were aware that Ionov and his group were agents of a foreign government.

Prosecutors say Ionov in 2015 directed the group to write a petition alleging that the U.S. had committed genocide against African people in America, and to send it to the United Nations, the White House and to change.org.

The document, titled “Petition to the United Nations on the Crime of Genocide against African People in the United States," notes America’s history of slavery and denial of civil rights for Black people. It argues the U.S. government still fails “to protect our health and well-being as expected under full citizenship” and inflicts “state or state-supported violence and terror on us.”

The petition, which is still available online, is labeled as being from the International People's Democratic Uhuru Movement, a Black international socialist organization. Representatives from the group said the FBI raided their center in St. Petersburg on Friday.

Akile Anai, who describes herself as director of agitation and propaganda for the African People’s Socialist Party, said agents searched her car and took her cellphone and laptop computer on Friday in addition to raiding the Uhuru House.

Anai said her organization had never received money from Ionov or any other members of the Russian intelligence service.

Members of the Uhuru movement first met Ionov in Russia when they were invited to an anti-globalization conference, and Anai said she also had been in contact with Ionov via email and also a webinar after Russia invaded Ukraine since “we were getting one side of the story on Russian and Ukraine.”

Officials alleged Friday that Ionov sought to inject himself into local politics in by supporting members of the group for office. In 2017, the group put forth candidates for mayor and city council, and again in 2019 for a city council race. The candidates lost. Any money the campaigns received outside the U.S. was returned, Anai said.

“Their premise is these were Russian campaigns. It’s a really insulting statement,” Anai said. “It was the Black community that ran the campaigns in our own interests. It’s an insulting notion that Black people can’t do anything for ourselves.”

Prosecutors say Ionov also exercised control of a separate organization in California that promoted secession by the state from the rest of the U.S, and helped fund a 2018 demonstration at the state capitol building. According to the indictment, he sent news coverage about the California secession movement to one of his FSB contacts and said that the officer had asked for “turmoil” and “there you go.”

More recently, prosecutors say, Ionov paid for the travel of members of an unnamed Georgia group to fly from Atlanta to San Francisco to join a protest outside a social media company in California that had placed content restrictions on posts supporting Russia's invasion of Ukraine.

The case is part of a much broader Justice Department crackdown on foreign influence operations aimed at shaping public opinion in the U.S. In 2018, for instance, the Justice Department charged 13 Russian nationals with participating in a huge but hidden social media campaign designed to sow discord during the 2016 presidential election won by Republican Donald Trump.

Russian government officials, and state-run media, often highlight anti-government protests in the U.S. and other Western countries, prominently commenting on political and social discord, racial riots, labor demonstrations, and mass shootings. The officials contrast the happenings in the U.S. with what they claim is the lack of such unrest in Russia.

FBI Special Agent in Charge David Walker in Tampa called the latest Russian efforts “some of the most egregious and blatant violations we’ve seen.”

“The Russian intelligence threat is continuous and unrelenting,” Walker said. “Today’s actions should serve as a deterrent.”

Schneider reported from Orlando. Nomaan Merchant in Washington contributed to this report.