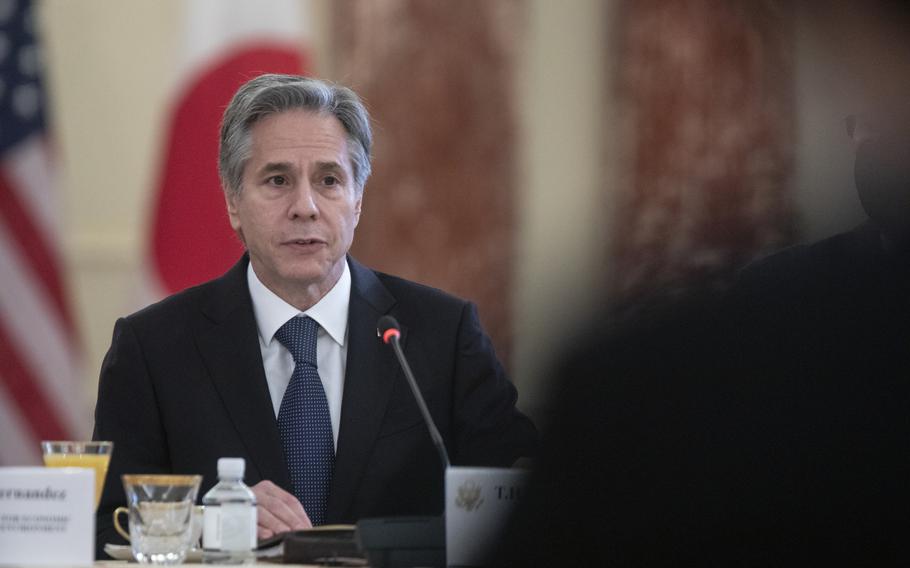 WASHINGTON — Secretary of State Antony Blinken spoke by phone to Russian Foreign Minister Sergey Lavrov on Friday in the highest-level known contact between the two sides since Russia invaded Ukraine, with Blinken urging Russia to accept a deal to win the release of American detainees Brittney Griner and Paul Whelan.

Russian officials gave no public hint whether Blinken had made any headway, only issuing a chiding statement afterward urging the U.S. to pursue the Americans' freedom through “quiet diplomacy, without releases of speculative information."

U.S. officials have in recent days publicized their efforts to get back Griner, a WNBA star, and Whelan, a corporate security executive, whose cases have drawn widespread national attention. While the direct outreach to Russian officials allows the Biden administration to show it is going all out to try to free the two U.S. citizens, it also risks undermining a core U.S. message to allies abroad: that isolating Russia diplomatically and economically will ultimately force Russia to pull its troops from Ukraine.

Blinken did not provide details of Lavrov’s response to what he had previously called a “substantial proposal" for Russia to release Whelan and Griner. Blinken had publicly requested the call and revealed the existence of the offer to Russia. People familiar with the offer say the U.S. wants to swap Whelan and Griner for convicted Russian arms dealer Viktor Bout.

Blinken described the call as “a frank and direct conversation” centered primarily on the detained Americans.

“I urged Foreign Minister Lavrov to move forward with that proposal," he said. "I can’t give you an assessment of whether that is any more or less likely.”

Blinken also said he had pressed Lavrov on the importance of Russia following through on an agreement to allow Ukrainian grain shipments to leave the Black Sea and warned him of consequences should Moscow move ahead with suspected plans to annex portions of eastern and southern Ukraine.

Blinken said he told Lavrov that the world will “never recognize” any annexation of Ukrainian territory, which he said would “result in significant additional costs for Russia.”

He declined to comment on how Lavrov replied to his messages. “I don’t want to characterize any of Foreign Minister Lavrov’s responses.”

In its statement afterward, the Russian Foreign Ministry said Lavrov “strongly suggested” to Blinken “returning to a professional dialogue in the mode of quiet diplomacy” on any efforts at American detainees' release.

Lavrov also repeated Russia's vows to keep fighting until it has achieved its aims in Ukraine, renewed complaints that U.S. and NATO support to Ukraine was prolonging the conflict, and accused the U.S. of not yet keeping up its end of agreements on the grain shipments from Ukraine, the Foreign Ministry said.

Blinken’s comments earlier this week marked the first time the U.S. government publicly revealed any concrete action it has taken to secure Griner’s release. The two-time Olympic gold medalist and player for the WNBA’s Phoenix Mercury was arrested at a Moscow airport in mid-February when inspectors found vape cartridges containing cannabis oil in her luggage.

Griner’s arrest came at a time of heightened tensions between Moscow and Washington ahead of Russia sending troops into Ukraine on Feb. 24. Griner’s five months of detention have raised strong criticism among teammates and supporters in the United States.

Her trial on drug charges started in a court outside Moscow this month, and she testified Wednesday that she didn’t know how the cartridges ended up in her bag but that she had a doctor’s recommendation to use cannabis to treat career-related pain.

The 31-year-old has pleaded guilty but said she had no criminal intent in bringing the cartridges to Russia and packed in haste for her return to play in a Russian basketball league during the WNBA’s offseason. She faces up to 10 years in prison if convicted of transporting drugs.

The Biden administration has faced political pressure to free Griner and other Americans whom the U.S. has declared to be “wrongfully detained” — a designation sharply rejected by Russian officials.

Whelan, a corporate security executive from Michigan, was sentenced to 16 years in prison on espionage charges in 2020. He and his family have vigorously asserted his innocence. The U.S. government has denounced the charges as false.

Russia has for years expressed interest in the release of Bout, a Russian arms dealer once labeled the “Merchant of Death.” He was sentenced to 25 years in prison in 2012 on charges that he schemed to illegally sell millions of dollars in weapons.

Kremlin officials presumably reveled in the news that the U.S., which has rallied friendly countries around the world to cut even vital trade ties with Russia to pressure it to withdraw from Ukraine, was now seeking engagement with Russia on a problem of its own.

“They are going to drag this out and try to humiliate us as much as they can,” said Ian Kelly, a retired career diplomat who served as U.S. ambassador to Georgia in the Obama and Trump administrations. “I don’t think it goes along with (the administration’s) overall policy.”

Kelly said the request for a call is “counterproductive to our broader effort to isolate Russia.”

Associated Press writers Vladimir Isachenkov in Moscow and Ellen Knickmeyer and Eric Tucker in Washington contributed to this report.