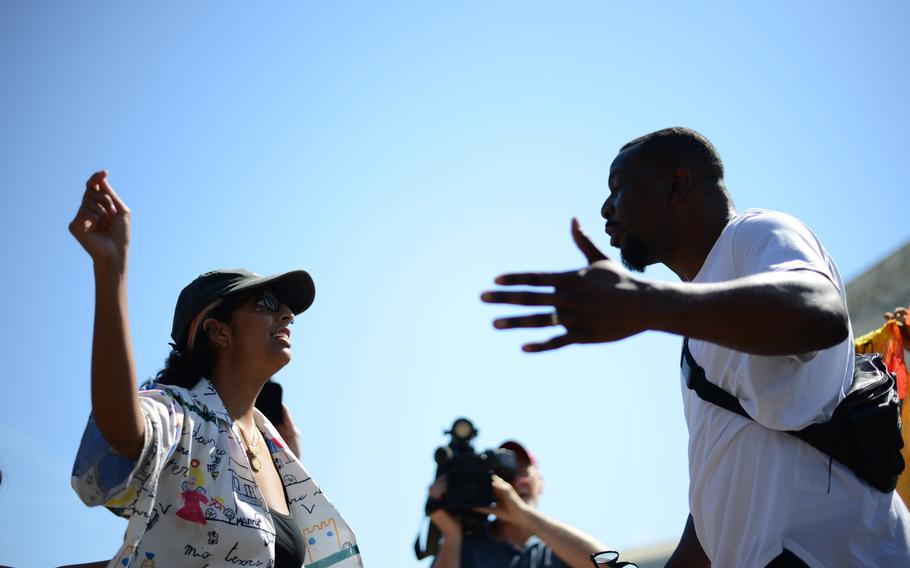 WASHINGTON — More than a thousand abortion rights demonstrators, chanting loudly and waving placards, gathered near the Supreme Court building Saturday for a second day of protests following the court's overturning of Roe v. Wade, adding their voices to renewed outpourings of emotion nationwide over the historic ruling.

By late Saturday morning, a throng of protesters had massed on First Street NE, between the Capitol and Supreme Court, in a gathering that was noisy but peaceful -- although some abortion rights advocates engaged in angry exchanges with antiabortion activists, who appeared in much smaller numbers.

"Not your uterus, not your choice," they chanted, as a group formed a semicircle in front of the court building and girls and adults stepped forward. One took the megaphone and led the crowd in defiant chants about the ruling.

"I Dissent," read one placard. Others demanded a "separation of church and state" and called for Congress to "codify Roe." At one point, a man rode a bicycle through the assembly, disrupting a speech while playing religious music and displaying a "JESUS SAVES" sign. Protesters shouted back at him, "Abort the court!"

U.S. Capitol Police said late in the afternoon that two people had been arrested. An officer said he understood the alleged conduct was "destruction of government property," but cautioned that he did not know what the formal charge eventually would be.

On First Street, 11-year-old Penelope Hall of Blacksburg, Va., took the megaphone in front of the Supreme Court to deliver her message: "The decision they made doesn't affect them," she said. "But it affects me and my friends and my family."

Other protesters cheered loudly as she handed the megaphone to the next speaker. With her father, Nathan Hall, standing next to her, Penelope said she wanted to tell the court that abortion was her right. Nathan Hall, 44, said he was "proud of her confidence and that she was able to articulate her voice. One of her first dream jobs was to be on the Supreme Court to protect women's rights."

D.C. police said they had activated the full department -- placing officers on standby in case of violence or vandalism -- through the weekend. On Friday, dozens of police officers surveyed the scene as a peaceful but animated crowd gathered outside the court less than two hours after the decision was announced. Security fencing ringed the court, and officers with long guns watched the crowd from the roof.

On Friday, thousands of abortion rights supporters gathered in downtown Washington to assail the ruling in Dobbs v. Jackson Women's Health Organization, in which a majority of the justices held that the Constitution does not guarantee the right to an abortion. Other marches to protest the decision unfolded in New York, Chicago, Nashville, San Francisco, Los Angeles and other cities. After the leak of a draft of the opinion last month, few were surprised. But many were still in shock.

An abortion rights activist who had been atop the Frederick Douglass Memorial Bridge since Friday morning came down Saturday afternoon, according to D.C. police. He had been on top of the bridge for more than 24 hours. 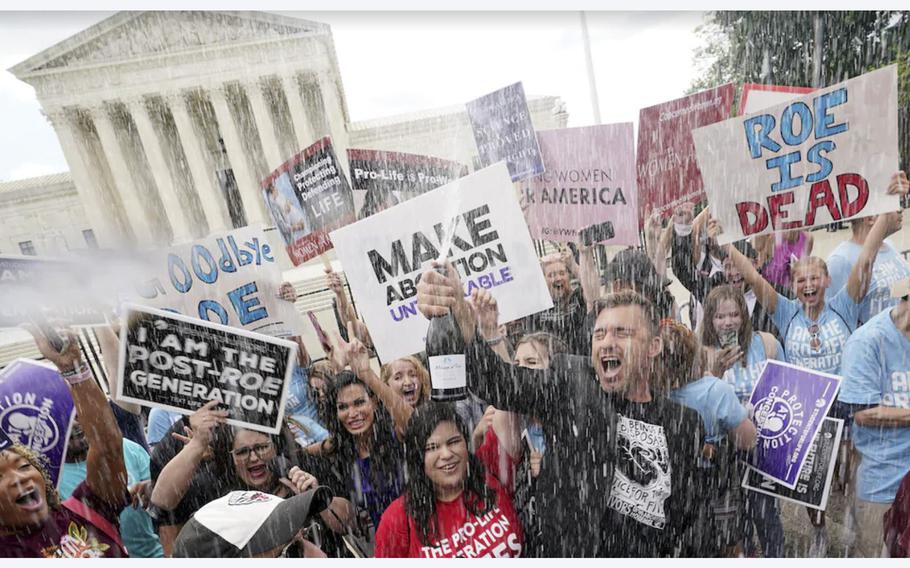 As Saturday morning wore on, Kate Ireland, of Chevy Chase, Md., bounced her 2-year old daughter, Eleanor, on her lap as the crowd chanted, "My body, my choice!"

"Can you say it?" Ireland, 40, asked her daughter, as Eleanor looked around, eyes wide. They came with Kate's sister, Elizabeth McNamee, 33, of the District, who is queer. Both sisters are also concerned about what other rights would be rolled back next, including same-sex marriage.

Ireland said she reads books with Eleanor about why people march and chant, and she hopes that the word "protest" is soon part of Eleanor's vocabulary. "We want to keep your body safe," she said, kissing her daughter's head.

On Friday, the scene outside the court in the immediate wake of the Dobbs ruling captured Americans' wildly divergent reactions to a watershed moment in one of the nation's bitterest debates. Antiabortion activists brimmed with joy at a long-sought legal victory while supporters of abortion rights voiced fury and despair. Saturday brought a similar outpouring.

Antiabortion activist Randall Terry, founder of Operation Rescue, applauded the court's ruling as he stood outside the building. He likened the justices' decision to the Allies' successful Normandy invasion in the fight against Nazi Germany in World War II, adding that ultimately he wants a federal law banning abortion nationwide.

The ruling "was a victory, but it's like D-Day," Terry said. "Our goal is to get to Berlin. Our mission is to make it illegal to kill a human being from conception until birth in all 50 states."

Carol Foulke, who is old enough to remember World War II, came to First Street from Northern Virginia in a wheelchair being pushed by her daughter. "Social worker for abortion access," her sign read.

It is "very important that as many people who feel as I do to get out here and let the government know we're out here," said Foulke, 93, as protesters, mostly women, approached to have their photos taken with her. "It's going to be harder on the young people because they have lived with Roe v. Wade their whole lives," she said. "They don't know what it's like to not have that."

Caitlynn Sawilski, 19, drove from Dover, Del., with a sign she'd made in 2018 for the anti-gun violence March for Our Lives: "So you're only pro-life when a uterus is involved?"

The other side of the sign said: "This is from four years ago, why am I still using it?"

"It is ridiculous that I have a sign that applies to trying to fight for gun safety and reproductive rights," Sawilski said.

Tim Clement, of Oxnard, Calif., arrived in D.C. on Wednesday, anticipating the ruling overturning Roe. He said he was here to celebrate and, like Terry, to prepare for next steps. "Now the fight really begins," said Clement, 49, a teacher and chaplain. "It's about going forward, not backward. The laws of abortion need to change across the country. It's a fight to change people's minds."

Mary Tretola-Johnson, 46, held a neon-green sign above her head saying she was a rape victim.

She said she was sexually abused for more than a year when she was a teenager. Although she did not get pregnant, she said, she thinks about what might have happened - and what might happen to others.

"There will be girls, women, who are impregnated by sexual assault that will not be given a choice, and they have to carry that baby to term. It's a lifetime of victimization that no man should ever have a voice in."

Tretola-Johnson, of Upland, Calif., who has a 23-year-old daughter, said she cried and felt numb when the court's ruling was announced.

"I can't believe that is what God intended, not the God that I serve," she said. "All I could think was, 'Not in America.' It was overwhelming."

Elsewhere in the country, hundreds gathered in Willard Park next door to Cleveland City Hall on Saturday, coming from as far as Akron, an hour away, and carrying homemade signs that captured their unambiguous anger and unwillingness to accept Friday's Supreme Court decision.

"I refuse to live in a country like this, and I'm not leaving," read one.

"Guns have more rights than my uterus," read another.

Andrea Simakis in Cleveland and Omari Daniels in Washington contributed to this report.