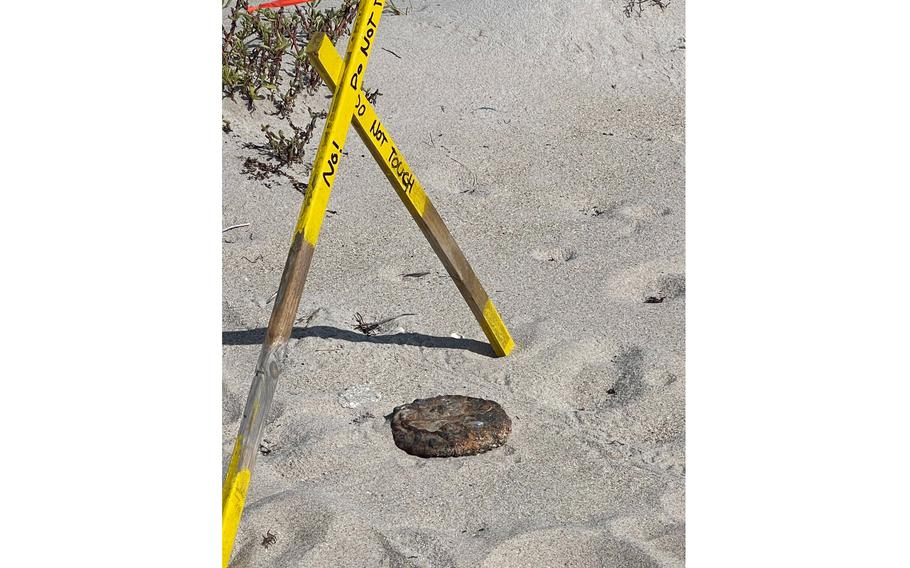 (Tribune News Service) — You can add vintage land mines to the list of oddities seashell hunters might find on Florida’s beaches.

One was discovered Wednesday on the Treasure Coast between Vero Beach and Fort Pierce, according to the Indian River County Sheriff’s Office.

Authorities resorted to creating a 600-foot safety perimeter in the 1800 block of S. Highway A1A and called bomb experts at Patrick Space Force Base to come get the heavily corroded device.

It was safely removed later in the day, and the beach was reopened, the sheriff’s office said in an update.

Military land mines are designed to be invisible underfoot and explode when stepped on.

It’s not clear if anyone stepped on it, but the sheriff’s office reports no one was injured.

The pancake-sized military ordnance is believed to be “from the 1930s” and was found by someone inspecting sea turtle nests, officials told station WPTV.

It is suspected the mine was linked to an “amphibious warfare” training site the Navy operated in the area during the 1940s, the station said.

This is not the first time a land mine has been found in the area.

In January 2020, a man using a metal detector south of Vero Beach found a “corroded, rusty ordnance,” resulting in another call to Patrick Space Force Base, TCPalm.com reported.