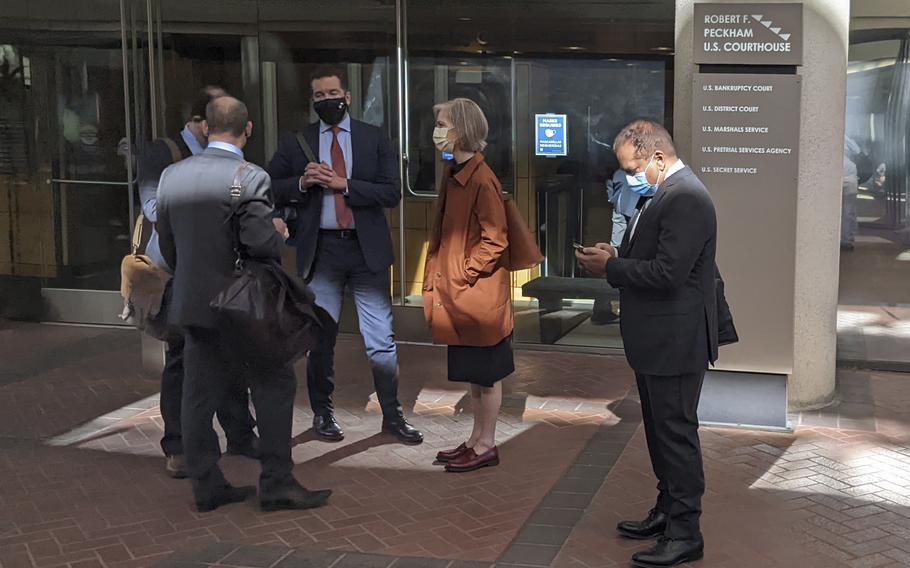 Former Theranos executive Ramesh "Sunny" Balwani, right, stands near his legal team outside Robert F. Peckham U.S. Courthouse in San Jose, Calif., on March 1, 2022. A jury on Tuesday, June 21 is scheduled to hear closing arguments in the trial of Balwani, the former Theranos officer charged with teaming up with his secret lover, CEO Elizabeth Holmes, to carry out a massive fraud. (Michael Liedtke/AP)

SAN JOSE, Calif. — Federal prosecutors on Tuesday depicted former Theranos executive Ramesh "Sunny"" Balwani as an instrumental accomplice in a fraud hatched by his secret lover, former Theranos CEO Elizabeth Holmes. In turn, his lawyers depicted him as a loyal soldier who tried to save the blood-testing company.

"Mr. Balwani is not a victim, he is the perpetrator of the fraud," prosecutor Jeffrey Schenk said near the end of his 3 1/2-hour closing argument before a jury in a San Jose, California, courtroom.

Jeffrey Coopersmith, one of the lawyers representing Balwani, painted Balwani as tireless executive who "put his money where his mouth is" by putting up about $15 million of his own fortune into Theranos between 2009 and 2011 because he believed in Holmes' vision.

In addition to his financial involvement in Theranos, Balwani joined the Palo Alto, California, company as chief operating officer in 2010 while clandestinely living with Holmes.

"Mr. Balwani put his heart and soul into Theranos," Coopersmith said as he began his closing argument. Later, Coopersmith pointed out that Balwani was such an ardent supporter of Holmes and Theranos that he never sold his stake in the company, even though at one point it was worth $500 million. It became worthless when the company collapsed.

The dueling presentations were among the finishing touches on a three-month-old trial that will determine whether Balwani will wind up in the same predicament as Holmes, who was convicted of defrauding Theranos investors in a separate trial that concluded earlier this year.

Coopersmith will continue his closing defense of Balwani on Wednesday and then prosecutors will have a chance to present a rebuttal before U.S. District Judge Edward Davila reads the final instructions sending the jury into its deliberations. The jury in Holmes' trial spent seven days in deliberations before convicting Holmes on four counts of investor fraud.

Holmes, 38, now faces up to 20 years in prison. It is a stunning reversal from the way she was once hailed in Silicon Valley as a technological visionary developing a revolutionary blood-testing technology — one who was worth an estimated $4.5 billion at one point in 2014.

Balwani, 57, is accused of the same Theranos investors as Holmes did from 2010 to 2015, as well as duping patients who entrusted the analysis of their health to a blood-testing technology that didn't work the way the company had promised from 2013 to 2015. Holmes was acquitted of the charges accusing her of defrauding patients who had their blood tested by Theranos.

Holmes and Balwani began dating around the same time she dropped out of Stanford University at the age of 19 to start Theranos, which later claimed to have discovered a way to test for more than 200 potential health problems with just a few drops of blood. They broke up in 2016 as Theranos collapsed amid revelations of serious flaws in its technology.

In a slide spelling out the criminal charges, the prosecution included a picture of Balwani alongside Holmes with the contents of a July 2015 text he sent to her. "I am responsible for everything at Theranos," Balwani wrote to Holmes. "All have been my decisions too."

Schenk also emphasized Balwani's responsibility for overseeing Theranos' blood-testing laboratory as part of an attempt to prove he endangered patients. In a 2014 text to Holmes, Balwani described the Theranos lab as a "disaster zone" that included a profane description because there were so many problems there.