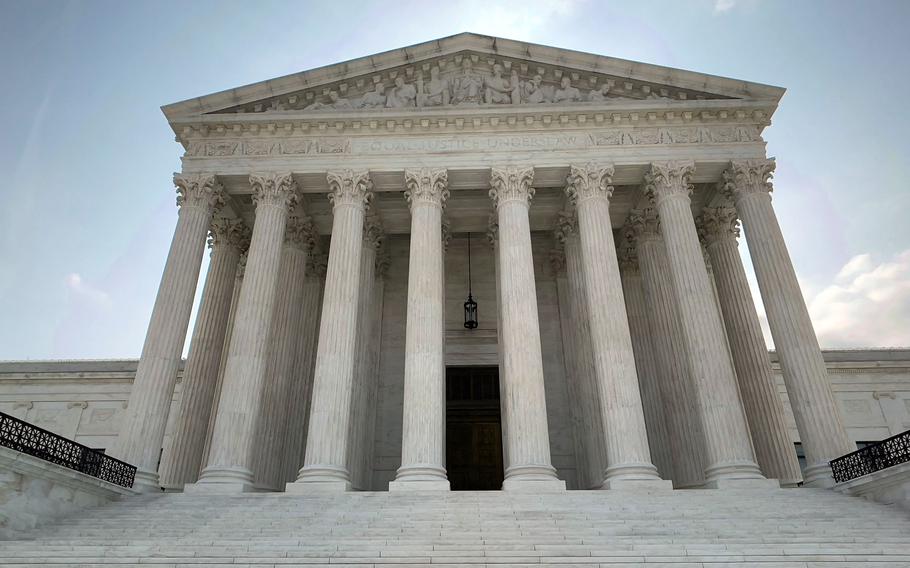 WASHINGTON — House lawmakers urged Defense Secretary Lloyd Austin on Friday to expand abortion access for service members and their families as the Supreme Court looks to overturn a landmark law preventing states from outlawing the procedure.

“We are gravely concerned about service members’ reproductive privacy and health care rights, especially given the unique challenges that service members face, including for those who are stationed in states that are poised to ban or restrict abortion and potentially other reproductive care if the [Supreme Court] dismantles Roe v. Wade,” the lawmakers wrote in a letter signed by 79 other House members.

Twenty-six states are likely to move quickly to ban abortion if Roe v. Wade is allowed to fall, 13 of them — Arkansas, Idaho, Kentucky, Louisiana, Mississippi, Missouri, North Dakota, Oklahoma, South Dakota, Tennessee, Texas, Utah, and Wyoming — have “trigger” laws in place that would immediately end abortion upon a Supreme Court ruling, according to the Guttmacher Institute, a pro-choice research organization that was once a part of Planned Parenthood.

Each of these states is home to military installations, with the largest concentration in Texas.

Lawmakers said service members are particularly vulnerable to restrictions on abortion rights because they already face hurdles when seeking out the procedure. Challenges include needing to request approval from their commander to take leave, traveling long distances when they are stationed in places where abortion is unavailable and lacking the funds to travel off base for care, they said.

Service members who have an abortion can also face retaliation from their commander or other troops if others find out they have had the procedure, lawmakers wrote. TRICARE, the military’s health insurance, only covers abortion when the mother's life is in danger or if pregnancy is the result of rape or incest.

“In a post-Roe world, service members stationed in states where abortion is banned or severely restricted will need additional leave, resources and financial support to facilitate travel to states where abortion is accessible,” lawmakers wrote. “The consequence of delays and challenges in accessing care across multiple states could mean that the service member is forced to carry a pregnancy against their will.”

Democratic members of the House Appropriations Committee moved this week to codify access to leave for abortion care into law, advancing a 2023 budget bill for the Pentagon that would prohibit the Defense Department from denying service members and civilian employees time off to obtain an abortion. The provision would also allow leave for their spouses or partners.

House lawmakers have pushed to shore up abortion rights for troops after a draft of the Supreme Court’s impending decision leaked last month. Speier and 81 other Democrats introduced a bill this month that would allow military medical treatment facilities to provide abortion services to service members.

The issue is also at the forefront in the Senate, where Sen. Mazie Hirono, D-Hawaii, made an impassioned plea for safeguarding women’s reproductive rights last week. Hirono co-sponsored legislation that mirrors the House bill.

“Service members have the right to control their own bodies no matter where they are stationed,” Hirono said during a meeting of the Senate Armed Services Committee. “It’s important to protect service members’ bodily autonomy. Who gets to decide what to do with her body, the woman or a bunch of politicians?”

Speier and Crow said the military must standardize leave policies set by the Army and Air Force, which enable service members to request leave for abortion without obtaining pre-approval from their commander or detailing the nature of the health care service that they plan to receive.

The lawmakers also want the Defense Department to offer subsidies and reimbursement for the cost of traveling off base, or to a different state, to obtain an abortion.

“Everyone, including members of our military and their families, should be free to make decisions about their futures and families, including the decision to have an abortion,” they wrote. “Limiting access to these services will negatively impact the morale, retention, overall health of the joint force and deeply harm the overall readiness of the armed forces.”