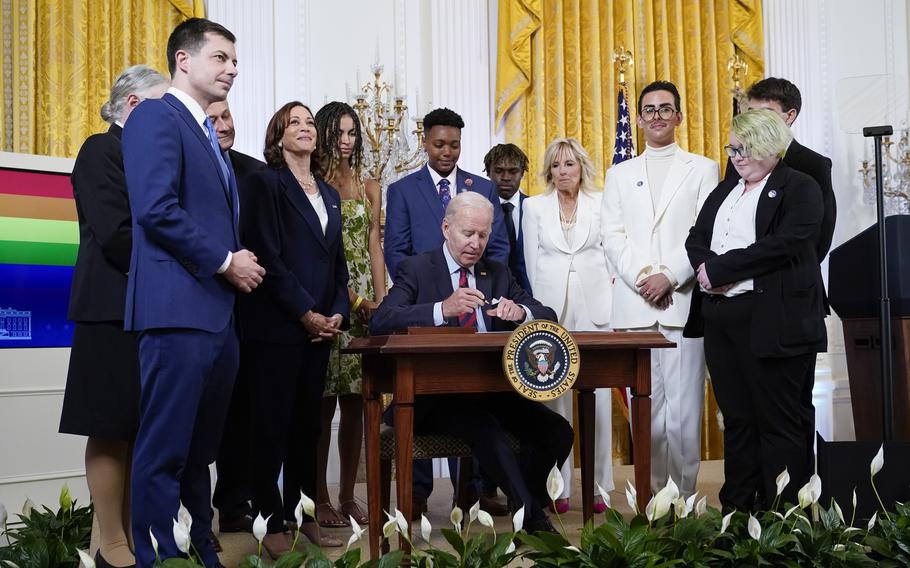 President Joe Biden signs an executive order at an event to celebrate Pride Month in the East Room of the White House, Wednesday, June 15, 2022, in Washington. (Patrick Semansky/AP)

WASHINGTON — President Joe Biden issued an executive order Wednesday to stymie what what his administration calls discriminatory legislative attacks on the LGBTQ community by Republican-controlled states, declaring before a signing ceremony packed with activists, "pride is back at the White House."

The order seeks to discourage "conversion therapy" — a discredited practice that aims to change a person's sexual orientation or gender identity — while also promoting gender-affirming surgery and expanding foster care protections for gay and transgender parents and children.

Tapping money already allocated to federal agencies rather than requiring new funding, Biden said the order is meant to counter 300-plus anti-LGBTQ laws introduced by state lawmakers over the past year alone. The Department of Health and Human Services will draft new policies to expand care to LGBTQ families and the Education Department will devise rules to better protect LGBTQ students in public schools.

The president, first lady Jill Biden and Vice President Kamala Harris attended a crowded reception in the White House's East Room, where the adjacent hallway was decorated in rainbow colors. Attending were LGBTQ activists, House Speaker Nancy Pelosi and other members of Congress, and top administration officials, including Transportation Secretary Pete Buttigieg, who adopted twins with his husband, Chasten.

The gathering is part of the Biden administration's recognition of Pride Month.

"All of you in this room know better than anyone that these attacks are real and consequential for real families," the president said before sitting to sign the order. He pointed specifically to the arrest last weekend of 31 members of the white supremacist group Patriot Front near an Idaho pride event.

Actions listed within the order attempt to bolster programs better addressing the issue of suicide among LGBTQ children and seek to make adoptions easier for LGBTQ parents and children.

"It shouldn't take courage to be yourself," said Jill Biden, who noted that it was a little too hot and humid in summer sun-drenched Washington to hold the event on the South Lawn. "We know that, in places across the country like Florida or Texas or Alabama, rights are under attack. And we know that in small towns and big cities, prejudice, and discrimination still lurk."

Among the state laws the White House has opposed is the so-called "Don't Say Gay" measure in Florida, which was signed by Republican Gov. Ron DeSantis in March. It bars instruction on sexual orientation and gender identity in kindergarten through third grade. Critics say it marginalizes LGBTQ people, and the law sparked a public battle between the state and the Walt Disney Co.

Biden's action creates a federal working group to help combat LGBTQ homeless and one promoting educational policies for states and school districts that encourage inclusive learning environments for LGBTQ children. His order also establish new rules to discourage conversion therapy, though efforts to enforce bans against it in places where state law allows the practice will rely on legal challenges from outside the White House.

While some Republican-led legislatures have championed conversion therapy, other states and communities have banned it. The American Psychological Association says conversion therapy is not based on science and is harmful to a participant's mental health.

The order further directs health officials to spell out that federally funded programs cannot be used to fund conversion therapy. And it seeks to ease barriers to health care and certain types of treatment for the LGBTQ community, including gender affirming surgery.

That follows Republican Gov. Greg Abbott's February order directing Texas' child welfare agency to investigate reports of gender-confirming care for kids as abuse. A judge has since issued a restraining order that halted investigations into three families, and prevented others.

"We have a lot more work to do," Biden said. "In Texas, knocking on front doors to harass and investigate parents who are raising transgender children. In Florida, going after Mickey Mouse for God's sake."

In earlier orders, Biden has sought to direct that gay and transgender people are protecting from discrimination in schools, health care, housing and at work. He ordered federal agencies to update and expand regulations prohibiting sexual discrimination to include sexual orientation and gender identity, and reversed a ban on transgender people serving in the military.

Biden on Wednesday also renewed his calls for Congress to pass the Equality Act, which would amend existing civil rights law to explicitly include sexual orientation and gender identification as protected characteristics. The measure has been stalled on Capitol Hill but the president said it's necessary to "enshrine the long overdue civil rights protections of all Americans, every American."