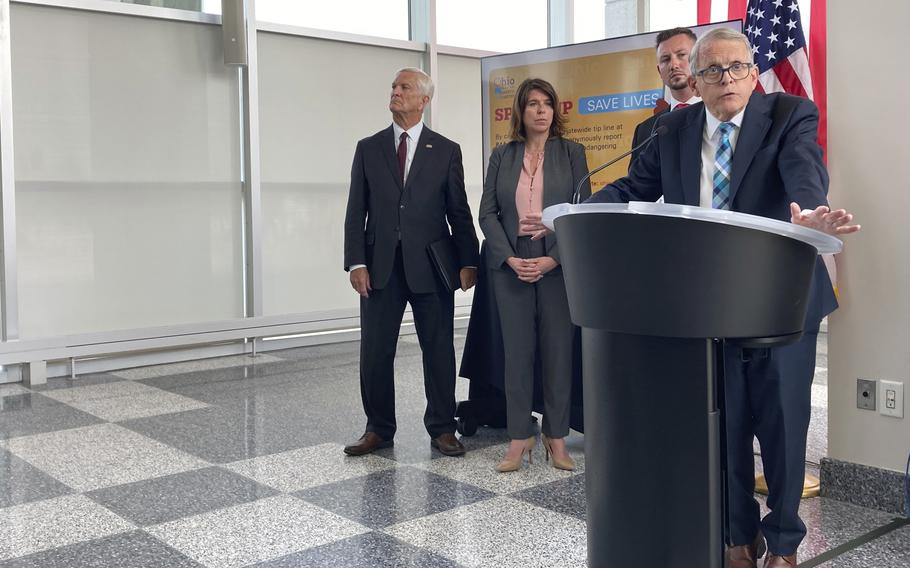 COLUMBUS, Ohio — Ohio school districts could begin arming employees as soon as this fall under a bill signed into law Monday by GOP Gov. Mike DeWine.

The law, as enacted, requires up to 24 hours of training before an employee can go armed, and up to eight hours of annual training. The training programs must be approved by the Ohio School Safety Center, and DeWine announced he's ordering the center to require the maximum 24 hours and the maximum eight hours.

Schools can provide additional training if they wish, DeWine said.

Before announcing the bill signing, the governor outlined several other school safety measures he and lawmakers have promoted, including $100 million for school security upgrades in schools and $5 million for upgrades at colleges.

The state is also adding 28 employees to the school safety center to work with districts on safety issues and to provide training under the new law. Ohio has also provided $1.2 billion in wellness funding for schools to address mental health and other issues, the governor said.

The new law "is giving schools an option, based on their particular circumstances, to make the best decision they can make with the best information they have," DeWine said.

The governor said his preference remains that school districts hire armed school resource officers, but said the law is another tool for districts that want to protect children. He emphasized that it's optional, not a requirement.

Mayors of Ohio's biggest cities, including Cincinnati, Columbus, and Cleveland, planned an afternoon news conference to highlight gun violence in their communities and outline their differences with the governor over gun issues. Nan Whaley, DeWine's Democratic opponent for governor, also planned a news conference, after denouncing his decision to sign the bill.

The signing came the same day a new law went into effect making a concealed weapons permit optional for those legally allowed to carry a weapon.

Democrats have said the law sends the wrong message coming so soon after the massacre of 19 children and two teachers at an elementary school in Uvalde, Texas. Republicans say the measure could prevent such shootings. Lawmakers fast-tracked the legislation to counter the impact of a court ruling that said, under current law, armed school workers would need hundreds of hours of training.

The measure is opposed by major law enforcement groups, gun control advocates, and the state's teachers unions. It's supported by a handful of police departments and school districts.