Why stakes are high in trial tied to Russia probe 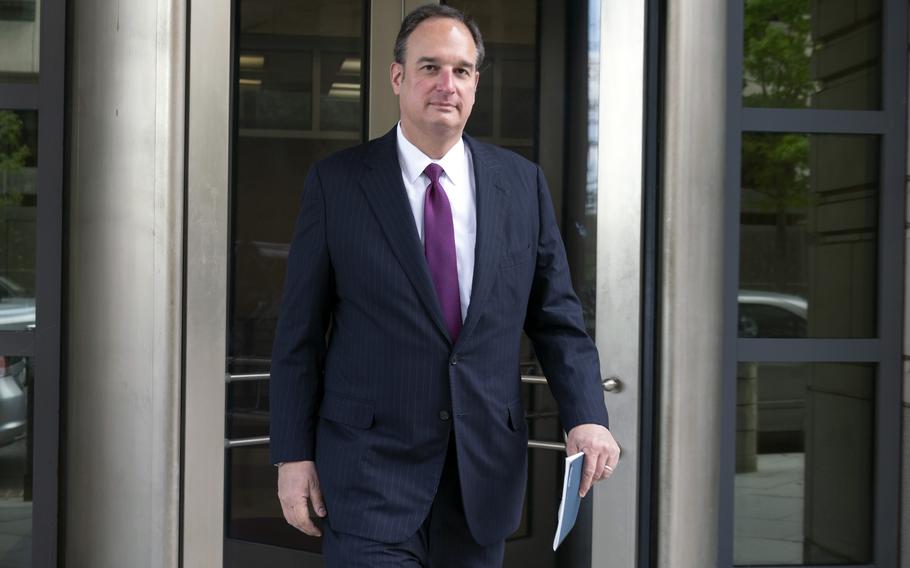 Attorney Michael Sussmann leaves federal court in Washington on April 27, 2022. Sussmann is accused of lying to the FBI, and his trial begins on Monday, May 16, with jury selection. (Jose Luis Magana/AP)

WASHINGTON — The first trial resulting from special counsel John Durham's investigation of the early days of the Trump-Russia probe hardly seems an explosive affair. It's about a single false statement that a cybersecurity lawyer with ties to the Hillary Clinton campaign is alleged to have made to the FBI in 2016.

Yet the stakes are high.

The verdict in the case of lawyer Michael Sussmann will help shape the fate and legacy of Durham's three-year probe. An acquittal would hasten questions about the purpose of the inquiry and the cost to taxpayers. A guilty verdict would energize supporters of Donald Trump who have long looked to Durham to expose what they see as biased mistreatment of the former president.

The trial, beginning Monday with jury selection in Washington's federal court, will not focus on Trump's claims of government misconduct during the FBI's investigation into Russian interference in the 2016 presidential election in the United States. Jurors will not be asked to decide whether the Trump campaign coordinated with the Kremlin to tip the outcome of the race.

But the trial will rewind the clock to a frenetic stretch in recent American history when the FBI was scrambling to investigate ties between Trump and Russia — and the rival Clinton campaign was eager to push its own suspicions.

WHAT'S THE CASE ABOUT?

Sussmann is accused of lying to the FBI's general counsel, James Baker, during a meeting on Sept. 19, 2016, in which Sussmann presented research that he said suggested a possible secret backchannel of communications between computer servers for Russia-based Alfa Bank and Trump's company, the Trump Organization.

The allegation of covert contact, if proved, would have been explosive at a time when the FBI was already investigating whether the Kremlin and the Trump campaign were conspiring to influence the election.

The claim was false, Durham says, but that's not the lie at the center of the Sussmann case.

The indictment accuses Sussmann of misleading the FBI by denying that he was representing any particular client during the meeting when he was actually acting on behalf of two clients: the Clinton campaign and a technology executive who had helped assemble the computer data.

WHY WOULD THAT MATTER AND WHAT DOES SUSSMANN SAY IN HIS DEFENSE?

Had the FBI known Sussmann was representing the interests of the Clinton campaign, prosecutors say, they would have carefully weighed his potential biases and motivations — as well as the reliability of the information he provided — before investigating the Alfa Bank allegations.

Prosecutors insist it was not a stray statement either, pointing to a text message they say Sussmann sent to Baker the night before the meeting in which he requested a sit-down and said that he would be coming on his own and "not on behalf of a client or company."

Sussmann's lawyers deny he lied during the meeting and point out that it wasn't recorded and no one took notes. They say Sussmann's Democratic Party affiliations were well known, including to the FBI. Beyond that, they contend the false statement Sussmann is alleged to have made is ultimately irrelevant because they say there's no evidence it influenced the FBI's decision to begin investigating the Alfa Bank claims.

In addition, they point to notes from an FBI and Justice Department meeting from March 2017 in which the FBI's then-deputy director is described as telling his colleagues that the Alfa Bank claims were presented to law enforcement by a lawyer acting on behalf of clients. Sussmann's lawyers say that shows the FBI understood Sussmann did indeed have a client in connection with the meeting.

They also have argued that allowing the case to proceed could have the effect of discouraging tipsters from reporting suspicions or potential wrongdoing to the FBI if they fear their motivations or possible political biases would be scrutinized.

WHAT DOES THIS CASE HAVE TO DO WITH THE WORK OF SPECIAL COUNSEL ROBERT MUELLER?

The prosecution centers on a limited slice of the original investigation into ties between Russia and the 2016 Trump campaign, which concluded in 2019 with a report from special counsel Robert Mueller and his team.

No matter the jury's verdict, it will not affect the core findings of Mueller's repor t — that Russia sought to aid Trump's campaign but that insufficient evidence exists to prove the two sides criminally collaborated.

In fact, the Mueller report ignored the Alfa Bank allegations. The FBI did investigate but concluded by early 2017 that there was no troubling contact between the servers.

Even so, the case does make clear that Clinton associates leveraged professional contacts to present the FBI with information about Trump that they thought was pejorative and deserving of investigation. And it will draw attention to the little-known universe of cyber researchers who sift through Internet data for potentially suspicious trends.

WHAT IS DURHAM INVESTIGATING?

Durham, the former top federal prosecutor in Connecticut, was appointed in 2019 by then-Attorney General William Barr to examine whether anyone committed misconduct as federal agencies investigated Russian election interference.

His investigation has gone on longer that Mueller's did and he has charged three people so far, including Sussmann. Though Durham's initial mandate was thought to focus on government officials, and though his team has interviewed FBI personnel, Justice Department lawyers and CIA officials, the investigation has also focused on private citizens such as Sussmann who came forward with information about Trump.

It is unclear how much longer the investigation will last, though Attorney General Merrick Garland has shown no public interest in curtailing the work and Durham was given a specific title of special counsel in the weeks before Barr resigned to ensure he could continue his work in a new administration.

In 2020, a former FBI lawyer named Kevin Clinesmith pleaded guilty to altering an email related to secret FBI surveillance of an ex-Trump campaign adviser, Carter Page. In applying for warrants to eavesdrop on Page, the FBI relied on a dossier of anti-Trump research known colloquially as the "Steele dossier" that contained rumors and uncorroborated claims.

Last year, Durham charged a Russia analyst who was a source for that dossier with lying to the FBI about his own sources of information — among them, a longtime Hillary Clinton supporter. Igor Danchenko has pleaded not guilty. The case is pending and set for trial in October.