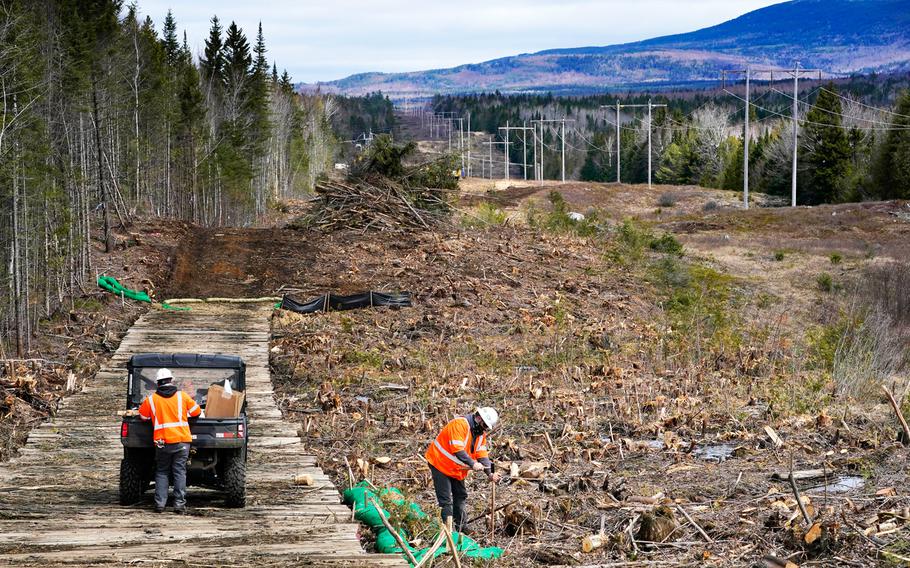 PORTLAND, Maine — Proponents in Maine of a stalled $1 billion energy corridor that sought to bringing Canadian hydropower to the New England power grid asked the state’s high court to breathe new life into the project Tuesday.

Attorneys for developers argued that a referendum in which voters rejected the project had the effect of retroactively overturning developers' vested rights — and violating the constitutional separation of powers.

“The credibility of the state of Maine is at stake in this case,” said John Aromando, attorney for the New England Clean Energy Connect.

The Maine Supreme Judicial Court was asked to weigh in on two separate lawsuits involving the high-profile project.

Developers are seeking to declare the November referendum unconstitutional. Another lawsuit focuses on a lease allowing transmission lines to cross a short segment of state land.

Chief Justice Valerie Stanfill, noting the packed courtroom, acknowledged that there's a high level of interest in the case. She said a written decision will be issued “as soon as we can.”

“Obviously we are addressing only the legal issues — not the propriety or wisdom of the project,” she said.

Critics contend the environmental benefits are overstated, and that the project would destroy woodlands in western Maine.

Supporters say bold projects are necessary to battle climate change and that the electricity, although earmarked for Massachusetts ratepayers, would help an entire region that's heavily reliant on natural gas, which can cause spikes in energy costs in the winter.

Most of the proposed 145-mile power transmission line would be built along existing corridors, but a new 53-mile (85-kilometer) section is needed to reach the Canadian border.

Central Maine Power’s parent company and Hydro Quebec teamed up on the project, and workers were already clearing trees and setting poles when the governor asked for work to be suspended after Mainers voiced their disapproval. The Maine Department of Environmental Protection later suspended its permit but that decision can be reversed depending on the outcome before the state's Supreme Court.

The utilities contend the referendum was unconstitutional because it retroactively put the brakes on a project that was properly permitted by the Maine Land Use Planning Commission, Maine Public Utilities Commission and U.S. Army Corps of Engineers, in addition to the Maine Department of Environmental Protection.

Aromando put the case in stark terms, noting that the project was "declared to be lawful, beneficial and indeed essential economic development to combat the existential threat of climate change.”

The lease issue focused on a stretch of the corridor over 32 acres of state land. A lawsuit contended the Bureau of Parks and Lands should have sought a two-thirds legislative approval for the lease.

At one point, Nolan Reichl, attorney for CMP and the project, said the Bureau of Parks and Lands handled "hundreds if not thousand of leases" in the same manner.

The chief justice interrupted him.