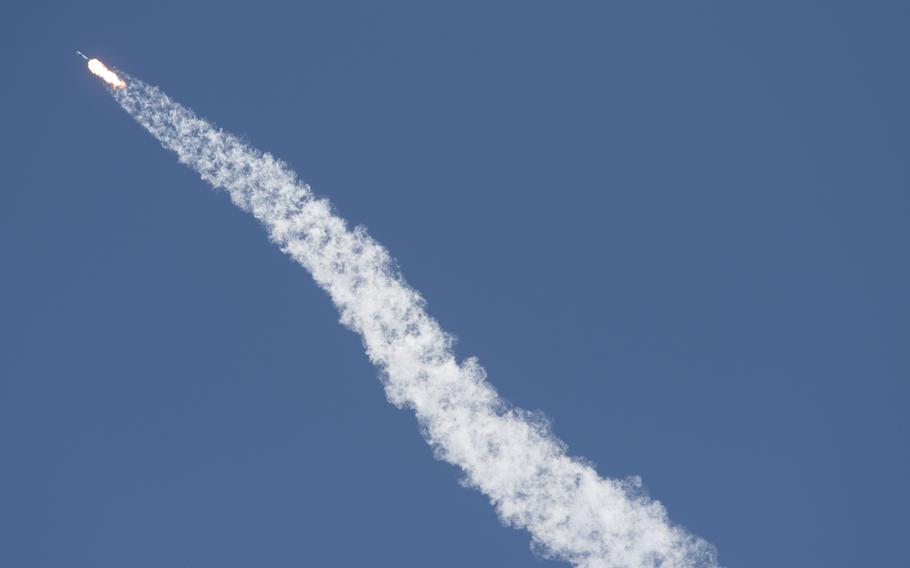 A SpaceX Falcon 9 rocket with the Crew Dragon capsule attached, lifts off with the first private crew from Launch Complex 39A on Friday, April 8, 2022, at the Kennedy Space Center in Cape Canaveral, Fla. (Joel Kowsky/NASA )

A crew comprised entirely of private citizens blasted off from the Kennedy Space Center on a flight to the International Space Station Friday morning, marking yet another milestone in the evolution of human spaceflight and the growth of the commercial space sector.

A SpaceX Falcon 9 rocket lifted off at 11:17 a.m., carrying three wealthy entrepreneurs, each of whom paid $55 million for the mission, and a former NASA astronaut, who is serving as their guide. While private citizens have for years flown to the space station on Russian rockets, the mission - which was commissioned by Axiom Space, a Houston-based company - is the first all-private mission to the station. It also is the first time private citizens have flown to the station from American soil.

The international crew is composed of Larry Connor, the managing partner of an Ohio real estate group; Mark Pathy, the chief executive of a Canadian investment firm; Eytan Stibbe, a businessman and former Israeli Air Force Fighter pilot; and Michael Lopez-Alegria, a former NASA astronaut who serves as an Axiom vice president. They are expected to reach the station Saturday at approximately 7:30 a.m. Eastern. They will spend eight days on the station before coming home in SpaceX's autonomous Dragon spacecraft.

The flight comes at a time when private citizens are increasingly exiting the atmosphere and dramatically expanding the ranks of space travelers. Blue Origin, the space venture run by Jeff Bezos, and Virgin Galactic, the outfit founded by Richard Branson, have taken crews on suborbital trips that scratch the edge of space and offer passengers a few minutes of weightlessness. (Bezos owns The Washington Post.)

The Axiom mission, though, is far more ambitious - taking the crew all the way to the space station, which orbits the Earth at 17,500 miles per hour. And instead of merely star gazing and delighting in the wonders of weightlessness, the crew says they will be engaged in meaningful research, and as a result, bristle at being labeled "space tourists."

Speaking to reporters before the flight, Connor said he thought "it's important to address the difference between space tourists and private astronauts."

He said the crews spent between 750 and more than 1,000 hours training at NASA's Johnson Space Center in Houston and SpaceX's headquarters outside of Los Angeles. And he said they would be engaged in more than two dozen science experiments while aboard the orbiting laboratory.

Connor, for example, plans to collaborate with the Mayo and Cleveland Clinic on research projects aimed at better understanding aging; Pathy is working with the Canadian Space Agency and the Montreal Children's Hospital on health-related projects.

Axiom plans a series of privately funded missions to the space station, capitalizing on a change in NASA policy that, until 2019, forbade private citizen flights to the station. The company is also developing a space station of its own that it hopes would serve as an eventual replacement for the International Space Station.

As a NASA astronaut for 20 years, Lopez-Alegria flew to space four times. In 2006, he flew on the Russian Soyuz with Anousheh Ansari, a private citizen who had paid a reported $20 million for the trip. At first, Lopez-Alegria was skeptical, worrying that her presence would be a distraction to the professionally trained crews. But he said her diligence and "consummate professionalism" won him and his fellow crewmates over.

"I think the hesitancy is natural when you come from a background as a military pilot and then spend your whole career studying to want to be an astronaut, and then somebody kind of cuts the line, if you will," he told The Post last year. "It was a little hard to swallow."

He said he expected "some resistance" from the crews on the station, but that it was the Axiom crew's job "to win them over."

In a media briefing this week, Derek Hassmann, Axiom's operations director, said the crew "want to be the best possible private astronauts that you can imagine. They want to be good house guests, if you will."

Last year, SpaceX flew another mission with four private citizens. Instead of going to the space station, the crew remained inside the Dragon capsule, which orbited the Earth for three days. The mission, dubbed Inspiration4, was funded by billionaire entrepreneur Jared Isaacman, who has since commissioned three more private space flights from SpaceX. Two would again be in the Dragon, and the third would be the first crewed flight of SpaceX's next-generation Starship rocket, which NASA intends to use to land astronauts on the moon.

The Axiom launch was delayed a couple of times as NASA worked to test its Space Launch System rocket on an adjacent launchpad. In the test, NASA intends to fully fuel the rocket, which would fly astronauts to the moon, and run a simulated countdown. But it ran into problems with a valve designed to relieve pressure inside the rocket during propellant loading.

In a statement, NASA said it would "investigate the issue at the pad," which would inform "the path forward." Despite the setback, NASA said it "provided the teams a valuable opportunity for training and to make sure modeled loading procedures were accurate."