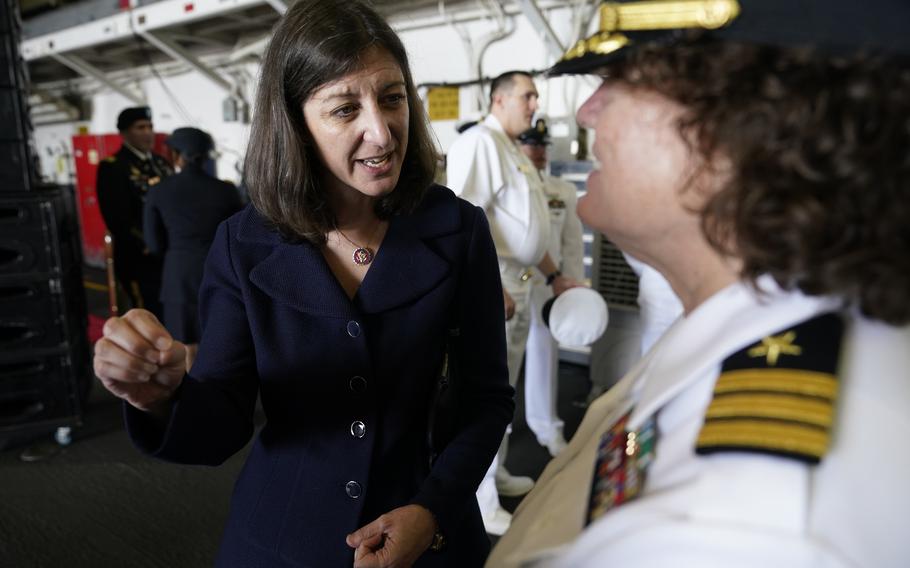 In this July 15, 2021, photo, Rep. Elaine Luria, D-Va., left, speaks to a Naval officer after a ceremony marking full operation of the NATO’s Joint force Command aboard the USS Kearsarge at Naval Station Norfolk, Va. Luria on Wednesday, Jan. 12, at a Surface Navy Association symposium in Arlington, Va., called for new legislation to allow the U.S. to respond faster should China invade Taiwan. (Steve Helber/AP)

WASHINGTON – The vice chairwoman of the House Armed Services Committee on Wednesday said new legislation is needed to allow the U.S. to respond faster should China invade Taiwan.

President Joe Biden “doesn’t have the authority [under the law] to actually respond” should China attack the island, Rep. Elaine Luria, D-Va., said, noting a U.S. response would be needed to maintain stability in the region.

“If China were to invade Taiwan today, the president would have to come to Congress for authorization to respond,” the 20-year Navy veteran said while speaking at the Surface Navy Association symposium in Arlington, Va. “We can’t lose [the] months that it would take in order for us to provide a response.”

The 1979 Taiwan Relations Act requires the president seek congressional approval before intervening militarily should China invade the democratic island, Luria wrote in an October editorial in The Washington Post. The War Powers Act also hinders the president from taking such action because it requires congressional approval to send military intervention abroad if the U.S., its territories or its armed forces are not under attack, she added.

Though the U.S. acknowledges China claims sovereignty over Taiwan through Beijing’s One China policy, it maintains unofficial relations with Taiwan, according to the State Department.

Luria is not alone in advocating for legislation to grant the president more authority when it comes to defending Taiwan. Congressional support for the island has grown in recent years as U.S. competition with China intensifies.

For example, Sen. Rick Scott, R-Fla., in February introduced the Taiwan Invasion Prevention Act to allow the president to send in the military if China makes a direct attack on Taiwan, but the bill stalled in the Senate Committee on Foreign Relations, according to congressional records.

A Chinese invasion is plausible in the coming years, according to Navy leaders. Adm. Phil Davidson, the top admiral in charge of the military’s Indo-Pacific Command, told Congress last year that he believed China could attempt to take control of Taiwan by the end of the decade.

To address the threat, Rep. Mike Gallagher, R-Wis., warned Navy leaders at the symposium not to lose sight of what the service needs in the immediate future while developing long-term technologies, such as unmanned ships projected for the fleet decades from now.

“If Adm. Davidson is right that China could invade Taiwan in the next five years, betting on tomorrow’s transformative technology probably makes less sense than fielding reliable technologies that work today,” said Gallagher, who served seven years in the Marine Corps.

Luria also said she was skeptical of investing too much in developing technologies and the Navy shouldn't sacrifice the ships that the service has today to make room for unproven, unmanned ships planned for the future fleet.

"Certainly, we think we need to make investments in developing technology ... but that should not be at the expense of having a fleet today," she said.

He said he worried having too much of a future-focused outlook would “reduce our ability to deny a fait accompli over Taiwan” if China carries out an invasion in the near term.

“The good news is that we can prevent this from happening … by just doing the hard work of building the battle force that’s ready by 2025, not 2045,” Gallagher said.