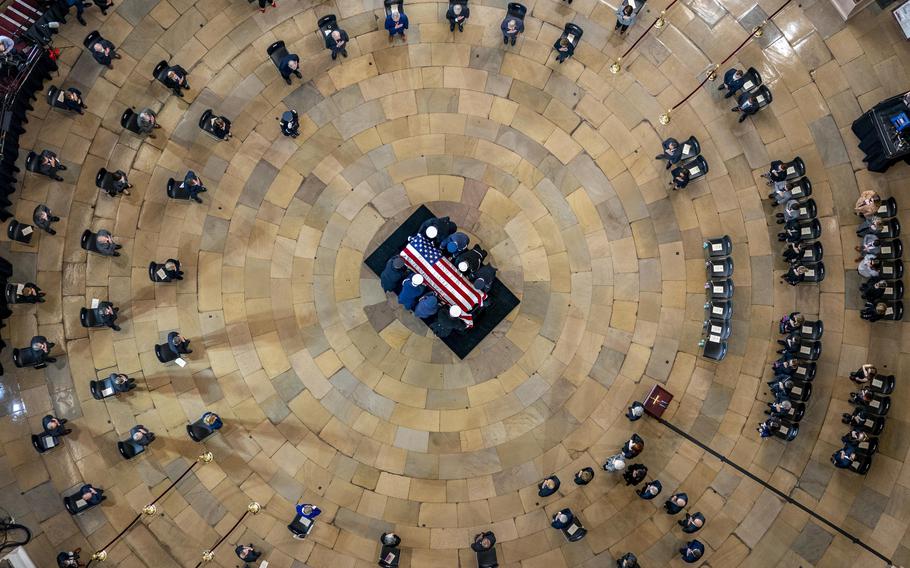 The casket of former Sen. Harry Reid, D-Nev., arrives in the Rotunda of the U.S. Capitol on Wednesday, Jan. 12, 2022, in Washington, where he will lie in state. (Andrew Harnik, Pool/AP)

WASHINGTON — The late Harry Reid was remembered Wednesday at the U.S. Capitol as a "legendary leader," a hardscrabble Democrat who rose from poverty in a dusty Nevada mining town to deliver landmark legislation from the Senate's most powerful position.

President Joe Biden, who has called Reid a "great American," paid silent tribute, stopping by briefly as Reid lay in state at the Capitol Rotunda. Biden made the sign of the cross and let his hand linger for a moment on the flag-draped casket.

Reid's family and colleagues joined for an earlier ceremony that was almost as succinct as the senator's own dry-humored style of hanging up the phone rather than engaging in lengthy goodbyes. He was recalled as one of the Senate's more significant, and memorable, leaders and a soft-spoken "force of thunder." Reid, who had pancreatic cancer, died last month at age 82.

"To see him lead and legislate was to see a master at work," said Pelosi, who worked side by side with him when they were the top two Democrats in Congress. She called Reid "a legendary leader of great integrity."

Reid served longer in Congress than anyone from his state and was the Senate majority leader alongside two presidents. He led the Senate during one of its more consequential legislative sessions, securing the economic recovery bill during the Great Recession and President Barack Obama's landmark health care law.

"Even though Harry talked softly, what he said carried the force of thunder," Schumer said.

Schumer said Reid never forgot the struggles of families and places like the one he came from and believed government had a moral obligation to ensure Americans had opportunities to improve their lives.

"Few have shaped the workings of this building like our dear friend from Nevada," he said. "Few have dedicated their lives to the work of the people quite like Harry did."

The service was largely closed to the public under COVID-19 protocols, though former colleagues, staff and others streamed in to visit, most wearing masks. He was only the 15th senator have to had the honor; his casket rested on the catafalque used for Abraham Lincoln.

Vice President Kamala Harris did not speak during the ceremony, but paused at the casket in tribute, as did the Republican leaders in Congress, Sen. Mitch McConnell of Kentucky and Rep. Kevin McCarthy of California. Later, Justices Sonia Sotomayor and Elena Kagan stopped by, as did some Cabinet and administration officials.

Afterward, Biden paid a brief visit to the Senate, where Reid's family was gathered. By evening, the casket was removed for departure.

The few words Reid did say were often flinty and fiery. He was unafraid to take on presidents (he called George W. Bush a "loser"), criticize the fossil fuel industry ("coal makes us sick") or declare the war in Iraq "lost." He titled his 2008 autobiography "The Good Fight."

Influential in retirement, Reid said that Biden won election, he should give his new presidency just three weeks to try to work with Republicans. If not, Biden should force changes in the Senate's filibuster rules to allow simple majority passage of legislative priorities, Reid said.

"The time's going to come when he's going to have to move in and get rid of the filibuster," Reid told The Associated Press.

With the Senate in difficult discussions this week on changes to the filibuster to push election and voting legislation past Republican objections, Schumer leaned on Reid's legacy as a "steward of the Senate."

"He also knew the Senate had to adapt to changing times," Schumer said.

Reid was born in the desolate mining town of Searchlight. His father was a hard-rock miner who committed suicide. His mother did laundry at home for bordellos. (Reid and other kids would swim in a brothel's pool.) Searchlight was a place, he said, that "had seen its better days."

The town had no churches, his family no religion. But a picture of President Franklin D. Roosevelt hanging in the Reid home would influence his political career.

Reid hitchhiked some 40 miles to attend high school and joined The Church of Jesus Christ of Latter-day Saints as he made his way through college and law school. An amateur boxer, he once leveled a punch at his future father-in-law after being denied a date with Landra Gould, who would become his wife. They were married for 62 years.

During Wednesday's ceremony, Landra Reid held a black hat that her husband often wore in his final years, as she sat in the Rotunda with the couple's five adult children. As she approached the casket, she set the hat beneath it under the Capitol dome, before placing a hand out in a kiss goodbye.

First elected to the House in 1982 and reelected in 1984, Reid then served 30 years in the Senate, including a decade as the Senate Democratic leader.

Along the way, Reid rewrote the map of Nevada by expanding public lands, halting the planned Yucca Mountain nuclear waste outside of Las Vegas; and securing national monument status around artist Michael Heizer's "City" installation in the desert. He quietly ensured federal money to research UFOs.

A man of few words, Reid often wrote notes instead — to family, colleagues and a Nevada student advocate who had reached out on immigration law changes. He championed the Dream Act and Obama's Deferred Action for Childhood Arrivals to protect young immigrants in the U.S. without legal status from deportation.

As his power rose, Reid engineered a Democratic legacy for his state with Nevada's early presidential caucus. He left behind a state party apparatus that was sometimes referred to as the "Reid Machine" for its enduring political power seeking to elect the next generation of Democratic leaders.

After an exercise accident at home, and with Democrats back in the Senate minority, Reid announced he would not seek reelection in 2016.

In his farewell address to the Senate, he acknowledged he had done things that "probably a lot of people wouldn't do." But he passed on his advice to those wondering how he made it from Searchlight to Washington.