Inflation up, virus down as priorities in US: AP-NORC poll

by
WILL WEISSERT and HANNAH FINGERHUT
• Associated Press • January 10, 2022 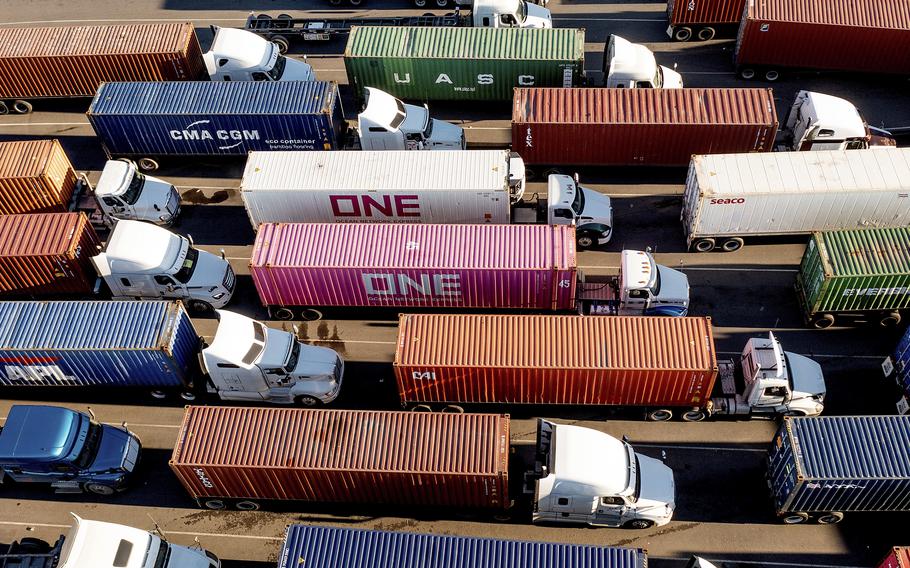 Trucks line up to enter a Port of Oakland shipping terminal on Nov. 10, 2021, in Oakland, Calif. The pandemic has receded as a top priority in many voters’ minds to start 2022, with the economy overshadowing coronavirus concerns and worries about inflation on the rise, a poll from The Associated Press-NORC Center for Public Affairs Research finds. (Noah Berger/AP)

WASHINGTON — Heading into a critical midterm election year, the top political concerns of Americans are shifting in ways that suggest Democrats face considerable challenges to maintaining their control of Congress.

A poll from The Associated Press-NORC Center for Public Affairs Research finds that management of the coronavirus pandemic, once an issue that strongly favored President Joe Biden and his fellow Democrats, is beginning to recede in the minds of Americans. COVID-19 is increasingly overshadowed by concerns about the economy and personal finances — particularly inflation — which are topics that could lift Republicans.

Just 37% of Americans name the virus as one of their top five priorities for the government to work on in 2022, compared with 53% who said it was a leading priority at the same time a year ago. The economy outpaced the pandemic in the open-ended question, with 68% of respondents mentioning it in some way as a top 2022 concern. A similar percentage said the same last year, but mentions of inflation are much higher now: 14% this year, compared with less than 1% last year.

Consumer prices jumped 6.8% for the 12 months ending in November, a nearly four-decade high. Meanwhile, roughly twice as many Americans now mention their household finances, namely, the cost of living, as a governmental priority, 24% vs. 12% last year.

The poll was conducted in early December, when worries about the virus were rising as omicron took hold in the country, but before it sparked record caseloads, overwhelmed testing sites and hospitals and upended holiday travel. Still, in recent follow-up interviews with participants, including self-identified Democrats, many said those developments didn't shake their views.

"If we say anything along the lines of, 'Let's wait until the pandemic dies down,' well, this son of a gun virus has unlimited ability to mutate," said Mary Small, a 65-year-old pharmaceutical research contractor in Downingtown, Pa., who hopes efforts to promote gun safety will take center stage in November's elections, including her state's race for an open Senate seat. "We might never be done with this."

That sentiment reflects the challenge for Democrats at the onset of the election year. The party won the White House and control of Congress in 2020 with pledges to manage the pandemic more competently than the Trump administration. After initially earning high marks — roughly 70% approved of Biden's handling of the pandemic from late February through mid-July — the virus' persistence has undermined the new president's message.

Administration officials acknowledge that the public is growing increasingly weary of COVID-19.

"Pandemic fatigue is real, and all of us feel it at some point," Surgeon General Vivek Murthy said in an interview. "As a doctor, I've certainly seen it with my patients over the years. When you get tired and beaten down by a health problem — whether it's a personal health problem or a broader public health challenge — it can lead to disengagement."

The White House says COVID-19's waning as a preeminent concern actually underscores its success rolling out preventative measures, including vaccines. It argues that economic jitters now exacerbated by the pandemic eventually will ease.

Still, with Democrats likely struggling to campaign on the idea that they've now defeated the virus, the other issues gaining attention among voters pose more immediate political headaches.

Judy Kunzman doesn't blame Biden for the ongoing pandemic, calling it "just one of those events that are impossible to predict and almost as impossible to fix." But she's worried about continued supply chain disruptions, which affect "a lot of the other issues that we're having: The rising food prices. The fact that I can't buy my new car."

"Everything has chips and the chips aren't there," said Kunzman, 75, of Middletown, Pa., referring to a pandemic-fueled, global shortage of microchips many electronics depend on. She's waited months for the car she'd like to become available and noted that her sister faced difficulties finding a new cellphone.

"It's certainly not the victory the Democrats thought it would be," Adam Brandon, president of the conservative activist group FreedomWorks, said of the government's virus response. "We'll have another wave next year, and I just don't think anyone's going to care. I think we're going to get to a point where everyone's just going to have to learn to live with it. This will die with a whimper as people just lose interest."

Many respondents in the survey said they're not suggesting the country ignore the pandemic. But compared with last year, higher percentages of people called out other issues, including immigration among Republicans and gun control among Democrats, as pressing in 2022. Some said they were encouraged by early indications that the latest outbreak, while spreading fast, could have milder effects for many.

"I'm hopeful with omicron," said Samantha Flowers, a 33-year-old community college teacher in Columbia, Mo., which has its own open Senate seat on November's ballot. "Even though more people are getting it, the sickness hasn't been as harsh for most people. Since we're all going to end up sick anyway, let it be one that we can recover from better."

Dorrie Keough from Garrettsville, Ohio, said she's vaccinated against COVID-19 and gotten a booster shot, but is still staying home as much as possible because of omicron.

"Whoever's not in power is going to spin it in such a way to make it look worse than it might be," said Keough, 68, whose state also has an open Senate seat this year. "As much reading as I do — and as much investigating that I do — it's real hard for me to parse out what is actually happening versus what people are saying is happening."

"I don't think we're going to win an election for lack of anxiety," Green said, "if we've achieved nothing else."

The AP-NORC poll of 1,089 adults was conducted Dec. 2-7 using a sample drawn from NORC's probability-based AmeriSpeak Panel, which is designed to be representative of the U.S. population. The margin of sampling error for all respondents is plus or minus 4.1 percentage points.