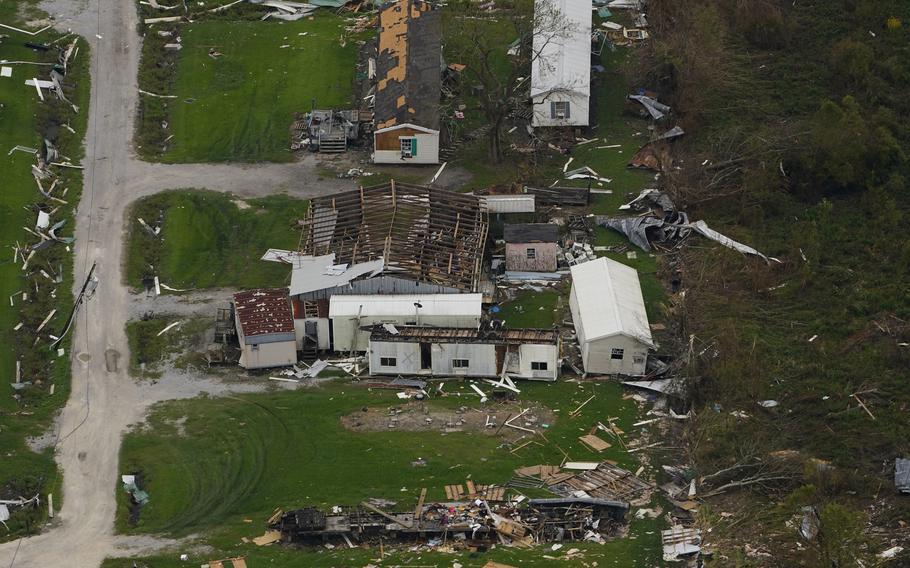 In this aerial photo, the remains of destroyed homes are seen in the aftermath of Hurricane Ida, Sept. 6, 2021, in Lafitte, La. Damage wrought by Hurricane Ida in the U.S. state of Louisiana and the flash floods that hit Europe last summer have helped make 2021 one of the most expensive years for natural disasters. Reinsurance company Munich Re said Monday, Jan. 10, 2022 that overall economic losses from natural disasters worldwide last year reached $280 billion. (Matt Slocum/AP)

BERLIN — Damage wrought by Hurricane Ida in the U.S. state of Louisiana and the flash floods that hit Europe last summer helped make 2021 one of the most expensive years for natural disasters, reinsurance company Munich Re said Monday.

The company's annual report put the overall economic losses from natural disasters worldwide last year at $280 billion, making it the fourth-costliest after 2011, the year a massive earthquake and tsunami struck Japan.

Insured losses in 2021 amounted to $120 billion, the second-highest after 2017, when hurricanes Harvey, Irma and Maria hit the Americas, according to Munich Re.

More than a third of those insured losses last year were caused by Ida ($36 billion) and the July floods in Europe ($13 billion).

Almost 10,000 died as a result of a natural disaster in 2021, comparable to the death toll in recent years, Munich Re said.

The company warned that studies showed a link between global warming and natural disasters.

"The images of natural disasters in 2021 are disturbing," said Torsten Jeworrek, a member Munich Re's board of management.

Satellite measurements show 2021 was one of the warmest years on record, with the annual average temperature 1.1-1.2 degrees Celsius higher than the pre-industrial period from 1850-1900, the European Union's Copernicus Climate Change Service said Monday.

Europe experienced its warmest summer on record, it said.

Scientists say that higher temperatures can cause the air to absorb more moisture, which can then lead to more extreme rainfall such as that seen in western Germany, Belgium and the Netherlands last summer.

The resulting floods devastated whole villages and killed more than 220 people in what insurance companies said was the costliest natural disaster Europe has ever seen.

"Even though events cannot automatically be attributed to climate change, analysis of the changes over decades provides plausible indications of a connection with the warming of the atmosphere and the oceans," said Ernst Rauch, Munich Re's chief climate scientist, adding that adapting to increasing risks would be "a challenge."

The company noted that not all natural disasters are climate-related, citing volcanic eruptions in Indonesia and Spain's Canary Islands, and earthquakes such as the one that hit Japan in February.