Prospects dim as US, Russia prepare to meet over Ukraine 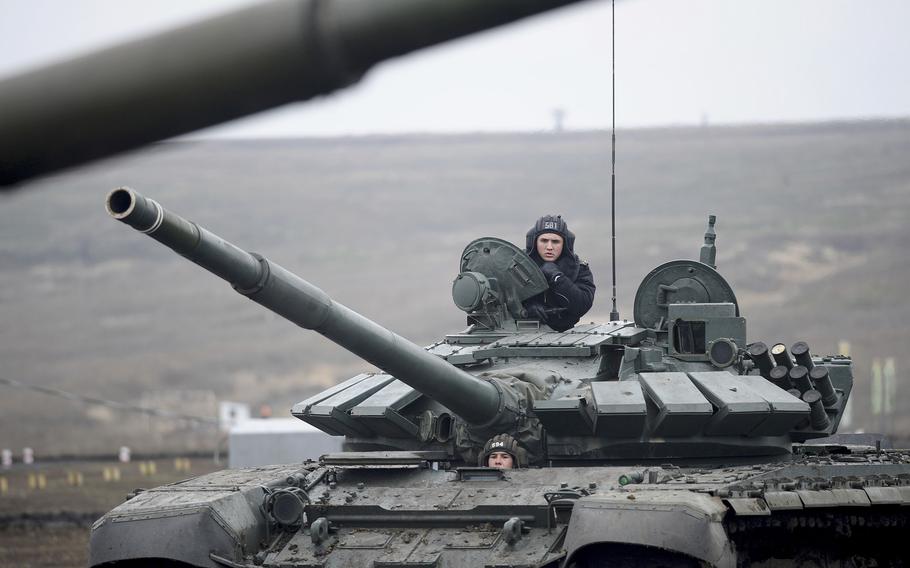 Russian troops take part in drills at the Kadamovskiy firing range in the Rostov region in southern Russia, Dec. 14, 2021. (AP)

WASHINGTON — With the fate of Ukraine and potentially broader post-Cold War European stability at stake, the United States and Russia are holding critical strategic talks that could shape the future of not only their relationship but the relationship between the U.S. and its NATO allies. Prospects are bleak.

Though the immediacy of the threat of a Russian invasion of Ukraine will top the agenda in a series of high-level meetings that get underway on Monday, there is a litany of festering but largely unrelated disputes, ranging from arms control to cybercrime and diplomatic issues, for Washington and Moscow to overcome if tensions are to ease. And the recent deployment of Russian troops to Kazakhstan may cast a shadow over the entire exercise.

With much at risk and both warning of dire consequences of failure, the two sides have been positioning themselves for what will be a nearly unprecedented flurry of activity in Europe this week. Yet the wide divergence in their opening positions bodes ill for any type of speedy resolution, and levels of distrust appear higher than at any point since the collapse of the Soviet Union.

Secretary of State Antony Blinken said bluntly Sunday that he doesn't expect any breakthroughs in the coming week. Instead, he said a more likely positive outcome would be an agreement to de-escalate tensions in the short term and return to talks at an appropriate time in the future. But the U.S. will have to see a de-escalation for there to be actual progress.

"It's very hard to see that happening when there's an ongoing escalation when Russia has a gun to the head of Ukraine with 100,000 troops near its borders, the possibility of doubling that on very short order," Blinken said on ABC's "This Week."

U.S. officials on Saturday unveiled some details of the administration's stance, which seem to fall well short of Russian demands. The officials said the U.S. is open to discussions on curtailing possible future deployments of offensive missiles in Ukraine and putting limits on American and NATO military exercises in Eastern Europe if Russia is willing to back off on Ukraine.

But they also said Russia will be hit hard with economic sanctions should it intervene in Ukraine. In addition to direct sanctions on Russian entities, those penalties could include significant restrictions on products exported from the U.S. to Russia and potentially foreign-made products subject to U.S. jurisdiction.

"Demands of the United States and other NATO countries that we carry out some de-escalation measures on our territory are excluded from the discussion. This is a non-starter in the literal sense of the word," Ryabkov said in an interview with the Tass news agency.

Russia wants the talks initially to produce formally binding security guarantees for itself with a pledge that NATO will not further expand eastward and the removal of U.S. troops and weapons from parts of Europe. But the U.S. and its allies say those are non-starters intentionally designed by Moscow to distract and divide. They insist that any Russian military intervention in Ukraine will prompt "massive consequences" that will dramatically disrupt Russia's economy even if they have global ripple effects.

In a bid to forestall efforts by Russia to sow discord in the West, the Biden administration has gone out of its way to stress that neither Ukraine nor Europe more broadly will be excluded from any discussion of Ukraine's or Europe's security.

Biden administration officials allow that neither topic can be entirely ignored when senior American and Russian diplomats sit down in Geneva in Monday ahead of larger, more inclusive meetings in Brussels and Vienna on Wednesday and Thursday that will explore those issues in perhaps more depth.

Still, the mantras "nothing about Ukraine without Ukraine" and "nothing about Europe without Europe" have become almost cliche in Washington in recent weeks, and senior U.S. officials have gone so far as to say they expect Russia to lie about the content of Monday's meeting to try to stoke divisions.

"We fully expect that the Russian side will make public comments following the meeting on Monday that will not reflect the true nature of the discussions that took place," said one senior U.S. official who will participate in the talks. The official was not authorized to speak publicly and spoke on condition of anonymity.

That official and others have urged allies to view with "extreme skepticism" anything Moscow says about the so-called Strategic Stability Talks and wait until they are briefed by the American participants to form opinions.

Blinken has accused Russia of "gaslighting" and mounting a full-scale disinformation campaign designed to blame Ukraine, NATO and particularly the United States for the current tensions and undercut Western unity. He said Russian President Vladimir Putin is engaged in an all-out war on the truth that ignores Russia's own provocative and destabilizing actions over the course of the past decade.

"Russia seeks to challenge the international system itself and to unravel our trans-Atlantic alliance, erode our unity, pressure democracies into failure," Blnken said on Friday, going through a list of offending Russian activity ranging from military intervention in Ukraine and Georgia to chemical weapons attacks on Putin critics to election interference in the U.S. and elsewhere, cybercrime and support for dictators.

Despite several conversations between President Joe Biden and Putin, including an in-person meeting last summer, Blinken said such behavior continues, at increasing risk to the post-World War II global order.

Thus, the intensified U.S. and allied effort to forge common positions on both the warnings and the "severe costs" to Russia if it moves against Ukraine. While expressions of unity have been forthcoming, Blinken was not optimistic about prospects for success in the talks.

"To the extent that there is progress to be made — and we hope that there is — actual progress is going to be very difficult to make, if not impossible, in an environment of escalation by Russia," he said.

Russia, meanwhile, has spun a narrative that it is a threatened victim of Western aggression and wants quick results from the meetings despite what appear insurmountable differences.

Putin has repeatedly warned that Moscow will have to take unspecified "military-technical measures" if the West stonewalls Russia's demands, and affirmed that NATO membership for Ukraine or the deployment of alliance weapons there is a red line for Moscow that it wouldn't allow the West to cross.

"We have nowhere to retreat," Putin said last month, adding that NATO could deploy missiles in Ukraine that would take just four or five minutes to reach Moscow. "They have pushed us to a line that we can't cross. They have taken it to the point where we simply must tell them; 'Stop!'"

Ryabkov and Deputy Secretary of State Wendy Sherman, who will lead the U.S. delegation, met over a working dinner Sunday night to discuss the upcoming talks.