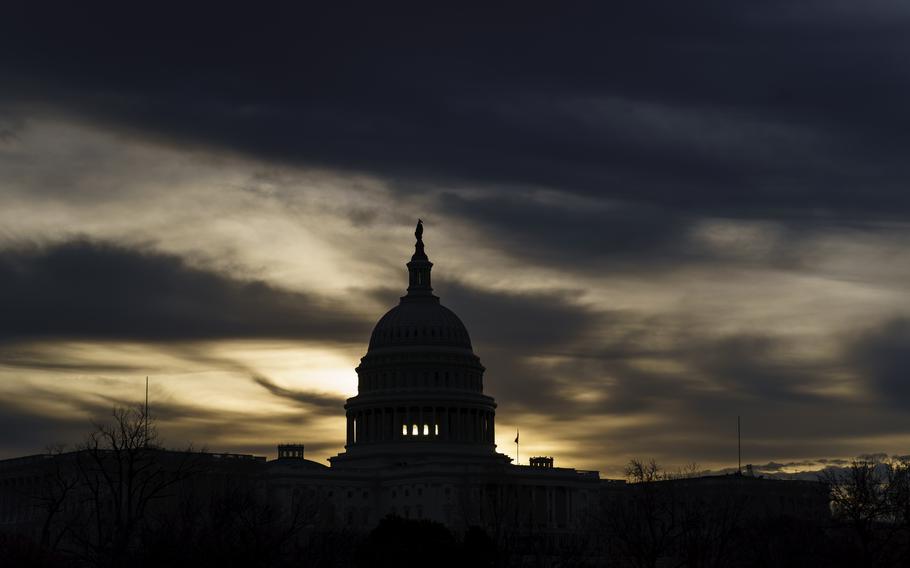 The U.S. Capitol is seen in Washington, early Dec. 17, 2021. President Joe Biden faces a steep path to achieve his ambitious goal to slash planet-warming greenhouse gas emissions in half by 2030, as a $2 trillion package of social and environmental initiatives remains stalled. Biden’s Build Back Better plan, which contains $550 billion in spending and tax credits aimed at promoting clean energy, was sidetracked by Democratic Sen. Joe Manchin, who said just before Christmas that he could not support the legislation as written. (J. Scott Applewhite/AP)

WASHINGTON — President Joe Biden faces a steep path to achieve his ambitious goal of slashing planet-warming greenhouse gas emissions in half by 2030, amid legislative gridlock that has stalled a $2 trillion package of social and environmental initiatives.

Biden's Build Back Better plan, which contains $550 billion in spending and tax credits aimed at promoting clean energy, was sidetracked by Democratic Sen. Joe Manchin of West Virginia, who said just before Christmas that he could not support the legislation as written.

Democrats insist they are moving forward on the sweeping package, which also would bolster family services, health care and other programs. Manchin signaled in recent days that climate-related provisions were unlikely to be a deal-breaker, but the bill has taken a back seat to voting rights legislation and other Democratic priorities.

Even without the legislation, Biden can pursue his climate agenda through rules and regulations. But those can be undone by subsequent presidents, as demonstrated by Biden reversing Trump administration rules that rolled back protections put into place under Barack Obama.

Experts cite Biden's executive authority to regulate tailpipe emissions from cars and trucks, as well as restrict emissions from power plants and other industrial sources, and the federal government's vast power to approve renewable energy projects on federal lands and waters.

Indeed, the Environmental Protection Agency announced new tailpipe rules for cars and trucks the day after Manchin's bombshell announcement Dec. 19. The next day, the Interior Department announced approval of two large-scale solar projects in California and moved to open up public lands in other Western states to solar development as part of the administration's efforts to counter climate change by shifting from fossil fuels.

The administration also has access to tens of billions of dollars under the bipartisan infrastructure law approved in November, including $7.5 billion to create a national network of electric vehicle chargers; $5 billion to deliver thousands of electric school buses nationwide; and $65 billion to upgrade the power grid to reduce outages and facilitate expansion of renewable energy such as wind and solar power.

"I think the U.S. has a lot of tools and a lot of options to make gains on climate in the next decade,'' said John Larsen, an energy systems expert and partner at the Rhodium Group, an independent research firm.

"Build Back Better is helpful" to meet Biden's goals, "but if you don't have Build Back Better, that doesn't mean nothing happens,'' Larsen said. "It just makes the task ahead a bit more challenging.''

Larsen is co-author of a Rhodium Group study last fall that found that passage of the Build Back Better package, along with the bipartisan infrastructure law and regulations by key federal agencies and states, could cut U.S. greenhouse gas emissions by 45% to 51% below 2005 levels in 2030.

The Biden bill offers incentives for electric car purchases, development of technology to capture and store carbon emissions, and construction of wind and solar farms, among other provisions.

Global leaders made progress at a November climate summit in Scotland, "but there needs to be much more" action taken, said Penn State climate scientist Michael Mann. "And for the U.S. to be able to do its part, we need the climate provisions of Build Back Better to pass Congress as soon as possible."

Jesse Jenkins, an energy systems engineer at Princeton University who has led an effort to model the Build Back Better bill's effect on U.S. emissions, said there is "a yawning gap" between where U.S. emissions are today "and where we need to be to hit President Biden's climate targets."

Such a gap "is unlikely to be bridged by executive action or state policy alone,'' Jenkins said in an email. The Princeton model estimates that the United States will fall 1.3 billion tons of carbon dioxide equivalent short of Biden's 2030 climate commitment without the Build Back Better law.

Carbon dioxide equivalent is a standard measurement for the range of so-called greenhouse gases, including carbon dioxide, methane and nitrous oxide, that are generated from the burning of coal and petroleum and from other industrial uses and agriculture, and trap heat in the atmosphere.

"I do not accept the premise that the Build Back Better package is dead,'' he wrote, adding that he thinks "there is still a very good chance that Congress passes the climate provisions and some combination of social policies'' being pushed by Democrats.

"The consequences of failure are untenable, and the climate clock only moves in one direction,'' Jenkins said.

Sen. Tina Smith, D-Minn., said she's confident Biden and his administration will make good use of their current regulatory authority, as well as billions of dollars in new spending in the bipartisan infrastructure law. But on their own, those tools are not enough to meet Biden's climate goals, she said. Rules imposed by one administration can be undone by the next, as Biden and former President Donald Trump have both demonstrated repeatedly.

Trump withdrew the U.S. from the global Paris climate accord and rolled back dozens of regulations imposed by his Democratic predecessor, Obama. Biden, in turn, has moved to reverse Trump on a range of actions, from rejoining the Paris agreement to canceling the Keystone XL oil pipeline and pausing new oil and gas leasing on federal lands and waters.

Biden has elevated the issue of climate change across the U.S. government, signing an executive order to make the government carbon-neutral by 2050 and converting to an all-electric fleet of car and trucks by 2035.

Even so, Biden's efforts can only go so far without an assist from Congress.

"Regulatory authority is no substitute for congressional action,'' Smith said. "That's why it's so important that we pass the strongest bill possible, and that's what we're focusing on doing.''

Enacting clean-energy investments in the Build Back Better Act would cut U.S. greenhouse gas emissions by a cumulative 5 billion tons of carbon dioxide equivalent by 2030, Jenkins said, an amount that would "put the U.S. within easy reach'' of Biden's commitment to cut emissions to half of 2005 levels by 2030.

Manchin, who chairs the Senate Energy Committee and whose state's economy relies heavily on energy production, suggested he could back many of the climate provisions in the bill, including some tax credits. He also wants to include money to promote nuclear power and capture emissions from industrial facilities that pump out greenhouse gases.

"I think the climate thing is one that we probably can come to an agreement on much easier than anything else," Manchin told reporters on Tuesday.

Democrats would need all their votes in the 50-50 Senate to advance the measure over unanimous Republican opposition.