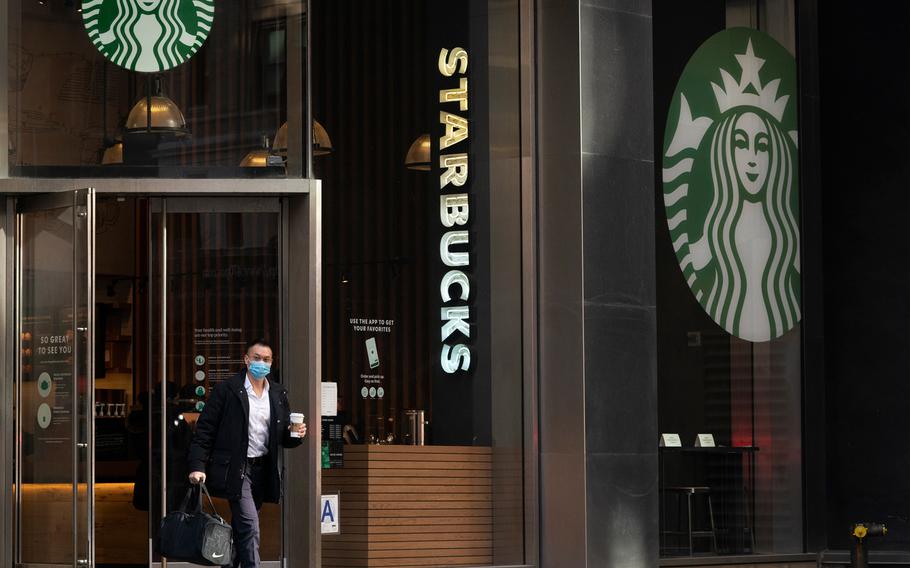 A man carries a beverage as he walks out of a Starbucks coffee shop, Tuesday, Jan. 19, 2021, in New York. (Mark Lennihan/AP)

NEW YORK — Companies that would be affected by a Biden administration vaccine-or-testing requirement for workers have largely remained on the sidelines while the Supreme Court considers whether the rule can be enforced.

The requirement, which would apply to companies with 100 or more employees, has faced numerous court challenges and was upheld last month by a three-judge panel with the U.S. Court of Appeals. Since then, one major company — Starbucks — announced its own vaccine mandate. It said in December that all U.S. workers must be fully vaccinated by Feb. 9 or face a weekly COVID testing requirement.

Many companies, including Lowe's and Target, have publicly said they would abide by any federal vaccine mandate and were taking steps to meet it, but stopped short of coming out with their own requirement. General Motors said in an email to The Associated Press Friday that it “stands firmly in support” of COVID-19 vaccinations, and that it was reviewing the rules “with multiple internal and external stakeholders."

“GM continues to encourage employees to get vaccinated given the broad availability of safe and highly effective vaccines, which data consistently show is the best way to protect yourself and those around you," General Motors said.

The arguments before the Supreme Court come as companies of all stripes are grappling with labor shortages made more acute by the rapid spread of the highly contagious omicron variant of COVID-19. Business groups like the National Federation of Independent Businesses and National Retail Federation have slammed the requirements as onerous and could hinder companies' ability to hire workers.

Jeff Levin-Scherz, population health leader at consulting firm Willis Towers Watson, says that many companies are hesitant to make any moves because court challenges have created a lot of uncertainty. He also pointed out that 14 states have enacted legislation that limits employer vaccine mandates. That makes it hard for companies that operate in different states to create a uniform plan, he said.

Levin-Scherz also noted that some companies may not need to do their own vaccine mandates because nearly all are vaccinated; others in more rural states typically have much bigger percentage of unvaccinated workers and that would require a bigger effort.

The survey also showed that very few employers with vaccination requirements — 3% — have reported a spike in resignations, although nearly 1 in 3 of those planning mandates are very concerned that they could contribute to employees leaving their companies. On the other hand, nearly half of employers surveyed believe that vaccine mandates could help recruit and retain employees.

In August, United Airlines became the first major airline to require employees to be vaccinated or face termination. Others followed in the fall, but withheld or dropped threats to fire anybody who didn’t get the shots.

Dallas-based Southwest Airlines said on Friday that it's awaiting a final decision on the legal challenges. In the meantime, it will not enforce the Biden administration's Jan. 4 deadline for all federal contractors be vaccinated. The company notes that 93% of its workers are vaccinated against COVID-19 or have been granted an accommodation.

Walmart, the nation’s largest retailer, required that all workers at its headquarters as well as its managers who travel within the U.S. be vaccinated against COVID-19 by Oct. 4 but it excluded front-line workers, who the company has said have a lower vaccination rate than management. The discounter has not offered any details about how it’s taking steps to meet the federal mandate.