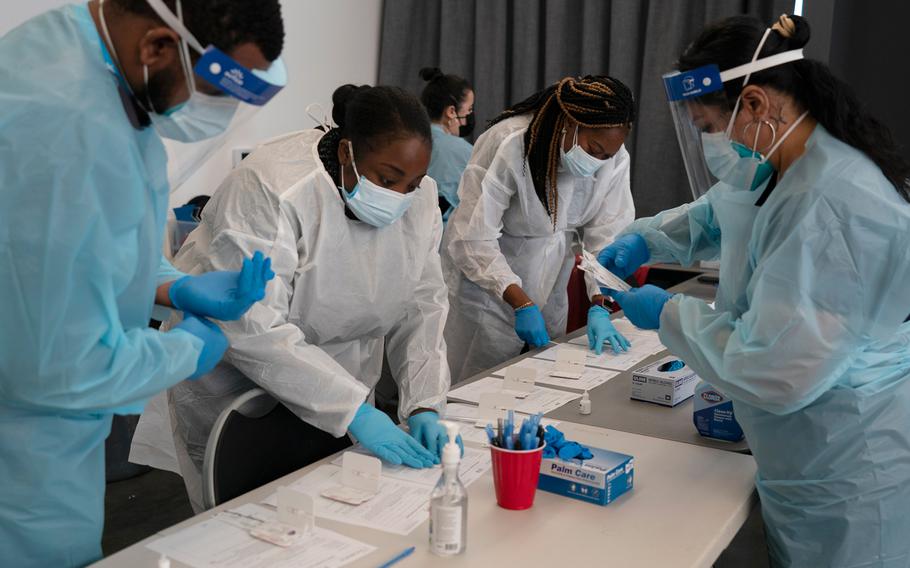 LOS ANGELES — The California surge in coronavirus cases has shut down schools and sidelined thousands of police, firefighters, teachers and health care workers but officials are hoping it will be short-lived.

“My hope is that, you know, by the time we get to February, we’re on the downside of seeing that massive amount of community transmission,” Los Angeles County Public Health Director Barbara Ferrer said Thursday.

California's number of confirmed COVID-19 cases has soared five-fold in two weeks and hospitalizations have doubled. Los Angeles County, the state's largest with 10 million residents, reported more than 37,000 new cases on Thursday, which was the highest level since the pandemic started.

But vaccinations and booster shots were protecting many people from severe illness, health officials said. Fewer than half of hospital patients with COVID-19 were there because of the infection. Most were hospitalized with unrelated illnesses, the county said.

“We do see this as a surge that will be, it is our hope and belief, short-lived,” Los Angeles Police Chief Michel Moore said Thursday as the city announced that the virus had sidelined more than 800 police and fire personnel.

Moore said it was taking an average of three weeks for officers struck with COVID-19 to return to work.

San Francisco reported on Tuesday that 167 officers were quarantined and 135 firefighters — both representing about 8% of their forces — were absent due to COVID-19. San Diego had nearly 200 officers and other personnel out Tuesday, reflecting a similar percentage of the department.

The surge also has led to hourslong waits for COVID tests as parents prepared to send their children back to school after the winter break. While millions of test kits have been distributed to counties, Gov. Gavin Newsom and state health officials have been criticized for backlogs.

Hundreds waited in line Thursday morning, some coughing and sneezing, at a test site in Long Beach.

“I think it’s very much going out of control,” said Salvador Barragan after self-administering his nasal swab. “I hope it calms down.”

Not only are lab tests harder to get amid record demand, officials say they're taking longer to process because COVID-19 also has depleted the ranks of technicians.

The virus surge has been straining school systems. District officials said all 54 schools in the West Contra Costa Unified School District, east of San Francisco, will be closed Friday and Monday.

More than 5,000 students have been absent each day this week, or almost a quarter of those enrolled in the district of 28,000 students and the district believes the coronavirus is to blame, spokesman Ryan Phillips said.

One in six of San Francisco’s 3,600 teachers were out Thursday. Even with administrators, substitutes and others stepping in there weren’t enough teachers for every classroom, Superintendent Vince Matthews.

“This is the most challenging time in my 36 years as an educator,” Matthews said during a break from filling in as a sixth-grade science teacher. “We’re trying to educate students in the middle of a pandemic while the sands around us are consistently shifting.”

Nearly 900 teachers and aides in San Francisco called in sick Thursday. A group of educators had called for a sickout, arguing that the school district hadn't done enough to protect them during the surge. They are asking for more testing and for all students to wear medical-grade masks.

It wasn’t clear how many educators who called in sick took part or had the virus or were out caring for family members.

“There barely were even enough subs to take attendance,” she told KTVU-TV, although district officials said classes weren't interrupted.

A similar sickout was planned for Friday in the Oakland Unified School District. In an online post cited by the San Francisco Chronicle, organizers said Oakland schools “are facing the greatest crisis in living memory."

“Staff and students sit in half-empty classrooms terrified that they will be the next to get infected and bring the disease home to their loved ones," the press release said.