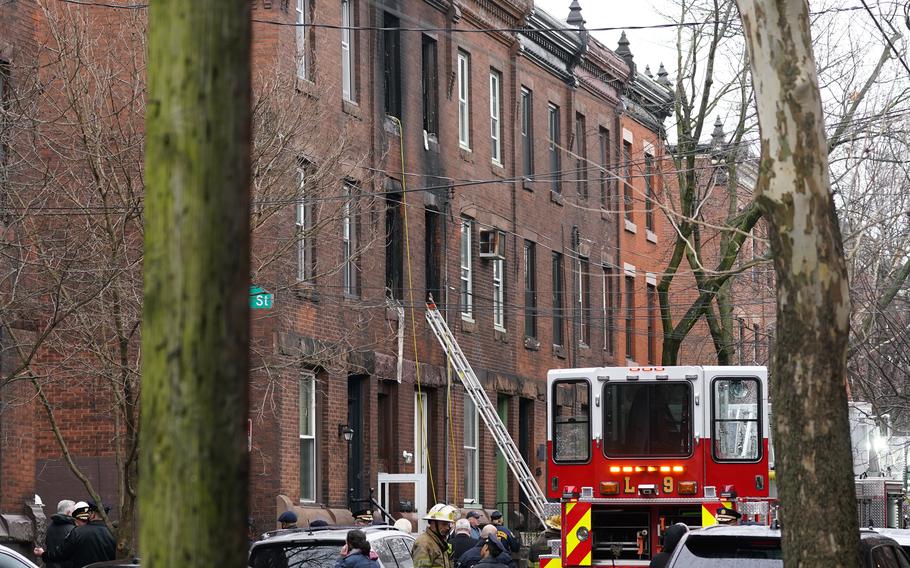 Philadelphia firefighters work at the scene of a deadly row house fire, Wednesday, Jan. 5, 2022, in the Fairmount neighborhood of Philadelphia. (Matt Rourke/AP)

PHILADELPHIA — Two sisters and several of their children were among the 12 people killed when a fire tore through a Philadelphia rowhome that apparently had no working smoke detectors, fire officials said.

Eight children lost their lives in the Wednesday morning blaze — the city's deadliest single fire in more than a century.

At least two people were hospitalized and some others managed to escape from the three-story brick duplex, which was public housing, officials said. The cause of the fire has not been determined. Officials said 26 people had been staying in the two apartments.

“I knew some of those kids — I used to see them playing on the corner,” said Dannie McGuire, 34, fighting back tears as she and Martin Burgert, 35, stood in the doorway of a home around the corner.

“I can’t picture how more people couldn’t get out — jumping out a window,” she said.

Officials did not release the names or ages of those killed in the blaze, which started before 6:30 a.m.

Family members on Facebook have identified two of the victims as sisters Rosalee McDonald, 33, and Virginia Thomas, 30. The siblings each had multiple children but it’s unclear if all of them were home at the time of the fire or how many of them died. Messages were left with several people who said they knew or were related to the victims.

None of the four smoke alarms appeared to be working, said Craig Murphy, first deputy fire commissioner. The alarms had been inspected annually, and at least two were replaced in 2020, with batteries replaced in the others at that time, Philadelphia Housing Authority officials said. It said the last inspection was in May 2021. Smoke detectors were working at that time, officials said.

The fire burned in a residential area of the Fairmount neighborhood, northwest of downtown and home to the Philadelphia Museum of Art and its famous steps from the film “Rocky.”

Streets around the home remained blocked off Wednesday evening. Moments after the last firetruck pulled away, several neighbors quietly approached the foot of the block and left candles and flowers.

In the late afternoon, onlookers and neighbors had migrated to a nearby elementary school, where relatives and friends of the home’s residents gathered to wait for news. 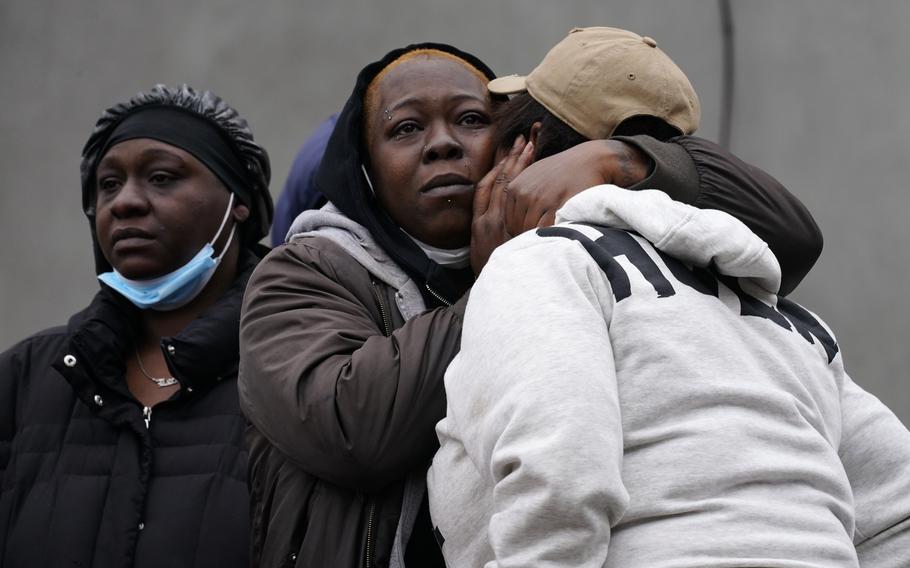 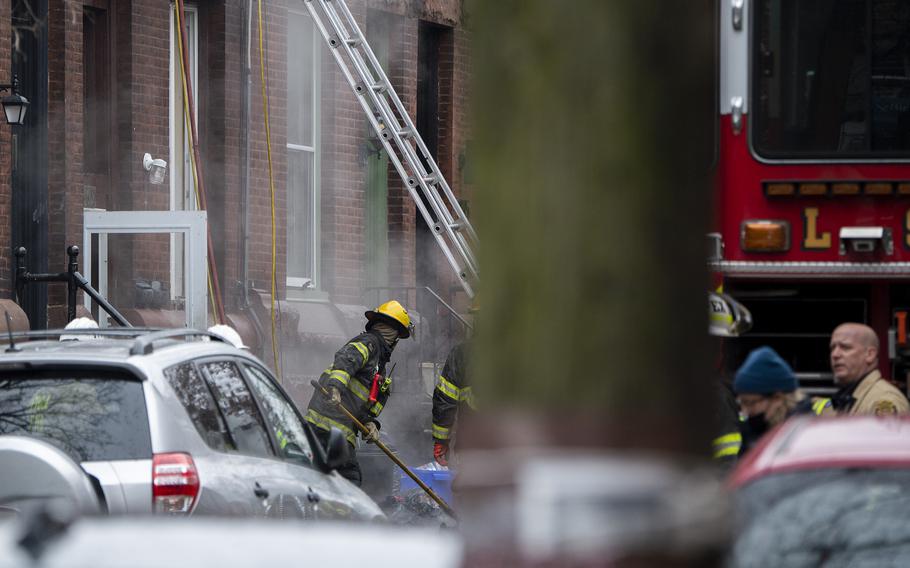 Fire crews work at the scene of a fatal fire in Philadelphia, on Wednesday, Jan. 5, 2022. (Joe Lamberti/Camden Courier-Post via AP) 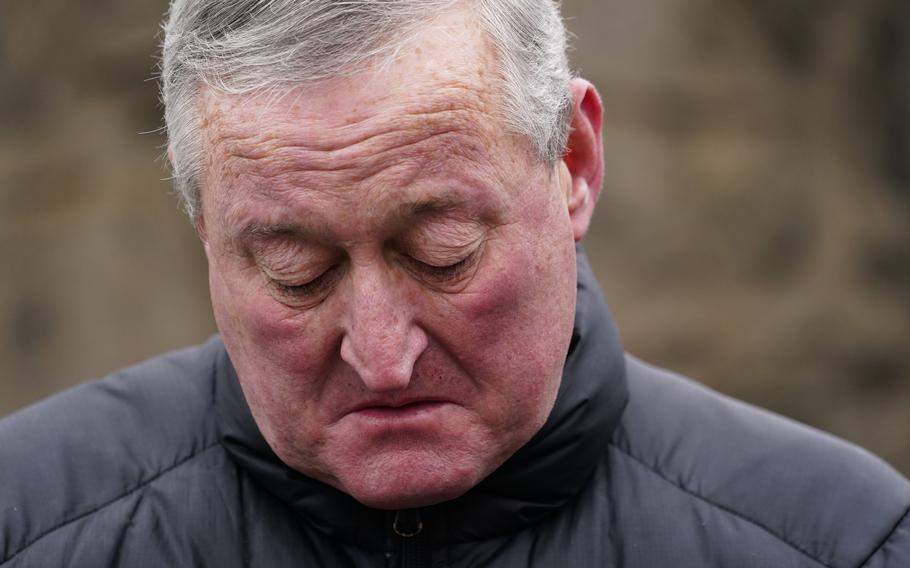 Philadelphia mayor Jim Kenney pauses while speaking at a news conference near the scene of a deadly row house fire, Wednesday, Jan. 5, 2022, in the Fairmount neighborhood of Philadelphia. (Matt Rourke/AP)

A small group of people, some wrapped in Salvation Army blankets, stared down 23rd Street, where the blaze happened, hugging one another and crying. Several friends of the children stopped by the school, hoping for information, after their texts and calls went unanswered.

Rabiya Turner said she rushed to bring clothes to cousins who escaped the blaze. People gathered at the school for warmth and someone to talk to, she said.

“It’s just like floating — everybody’s floating,” she said before hurrying away.

Officials held a news conference Wednesday near the scene of the fire.

“It was terrible. I’ve been around for 35 years now and this is probably one of the worst fires I have ever been to," said Murphy, the deputy fire commissioner.

“Losing so many kids is just devastating,” said Mayor Jim Kenney. “Keep these babies in your prayers.”

First lady Jill Biden, who along with President Joe Biden has deep ties to the Philadelphia area, tweeted, “My heart is with the families and loved ones of the victims of the tragic fire in Philadelphia.”

Crews responded around 6:40 a.m. and saw flames shooting from the second-floor front windows in an area believed to be a kitchen, Murphy said. They found “heavy smoke, heat and limited visibility on all floors,” according to a statement Wednesday night from the city.

The odd configuration of the building — originally a single-family home that had been split into two apartments — made it difficult to navigate, he said. Crews brought it under control in less than an hour, he said. Firefighters were able to rescue one child from the building, but the child died.

He noted that 26 was a large number of people to be occupying a duplex, but a spokesperson for Philadelphia’s Department of Licenses and Inspections said the city does not limit the number of family members who can stay in a single unit. The mayor said people should withhold judgment.

“You don’t know the circumstances of each and every family, and maybe there were relatives and family that needed to be sheltered," Kenney said. “Obviously the tragedy happened, and we all mourn for it. But we can’t make judgment on the number of people living in the house because sometimes people just need to be indoors.”

“It’s just heartbreaking,” said Andrea Duszenczuk, 68, whose family has long owned a home in the neighborhood and who walked her dog past the home regularly. “A lot of these homes have old wiring — these are probably 125 years old. Who knows what’s behind the walls.”