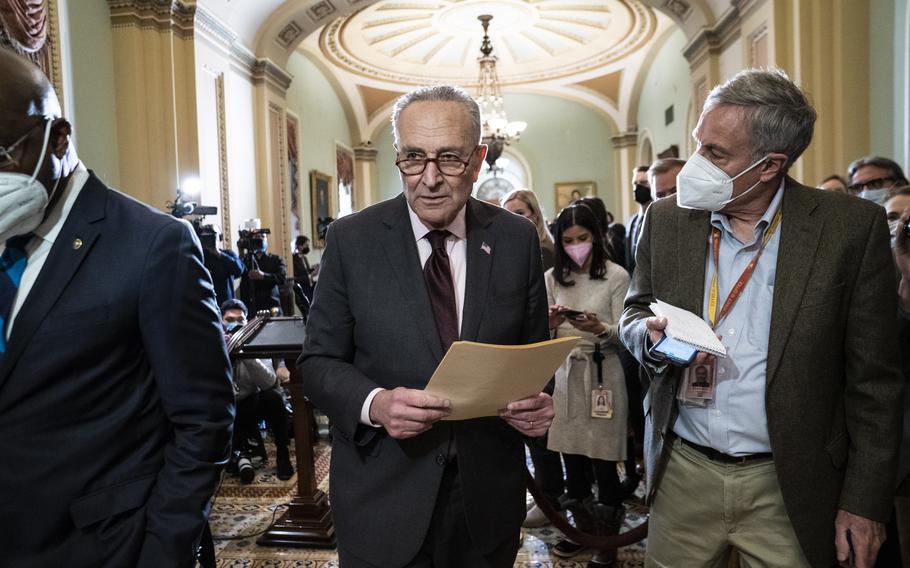 WASHINGTON - Congressional Democrats plan to vote as soon as Tuesday on a measure to raise the debt ceiling by $2.5 trillion, staving off a potential default and deferring the high-stakes fiscal fight until after the 2022 election.

The votes in the House and Senate follow less than a week after lawmakers struck an unusual bipartisan deal that allows Democrats to adopt the increase, and Republicans to oppose it, without putting the country at risk of missing a critical December 15 deadline.

The debt ceiling corresponds to the maximum amount under law that the U.S. government can borrow to pay its bills. Unless Congress increases or suspends the cap, the country eventually would not be able to meet its financial obligations - a catastrophic event that experts say could plunge the nation into another economic recession. U.S. debt reached nearly $29 trillion in early December, according to the Treasury Department.

The U.S. has teetered on the precipice of a financial doomsday repeatedly this year, as Republicans have warred with Democrats over President Joe Biden’s economic agenda. Seeking to slash his spending proposals, GOP leaders repeatedly have refused to supply their must-have support for raising the debt ceiling, imperiling Democrats in the Senate, who do not have a sizable enough majority to act on their own.

The standoff only inflamed partisan tensions on Capitol Hill, as Democrats pointed out that they had ably offered their support toward raising the debt ceiling under now-former President Donald Trump. Many Democratic lawmakers blasted Republicans for hypocrisy and raised alarms that the mere prospect of default could rattle global markets at a time when many nations are still recovering from the coronavirus pandemic.

But Senate Majority Leader Charles Schumer, D-N.Y., and Senate Minority Leader Mitch McConnell, R-Ky., ultimately reached a deal to defuse the conflict last week, much as they had done earlier this fall. Under the new arrangement, Republicans agreed to help Democrats make a one-time tweak to Senate rules, allowing them to increase the debt ceiling more swiftly - yet without the aid of the GOP.

Both sides heralded it as a victory: Democrats saw it as the most expedient solution to prevent a debt crisis, and Republicans held firm to their position that they would not vote directly on a measure to raise the borrowing cap. It opened the door for both sides to launch political attacks about spending entering the 2022 midterms, when the composition of Congress is up for grabs, but it sets the next deadline in early next year - ensuring the politically charged atmosphere doesn’t trigger a potential financial crisis.

“The resolution we will vote on will provide for a raising of the debt limit to a level commensurate with funding necessary to get into 2023,” Schumer said Tuesday as the chamber prepared to take the first procedural step toward passing the increase.

“As I have said repeatedly, this is about paying debt accumulated by both parties, so I am pleased Republicans and Democrats came together to facilitate a process that has made addressing the debt ceiling possible,” he said.